Assign Naryshkin Sergey Evgenievich for the position of Director of the foreign intelligence Service of the Russian Federation. This decree shall enter into force on October 5, 2016″, — quotes the text of the decree a press-service of the Kremlin. The current head of the SVR Mikhail Fradkov dismissed “in connection with retirement”.

At a meeting with Naryshkin and Fradkov in the Kremlin, Putin expressed the hope that “voters who voted in the recent elections for Naryshkin, will be sympathetic to the fact that he will have to surrender his mandate.”

“The President gave a high assessment to the activities of this service [SVR], especially in the context of the current international situation, over the years that it was headed by Fradkov, thanking him for this work”, — said the press Secretary of the President Dmitry Peskov, reports “Interfax”. Soon Fradkov nominated Chairman of the Board of Directors of Russian Railways, said Peskov.

That Sergey Naryshkin may leave the post of speaker of the state Duma and head of the foreign intelligence Service, wrote in August, “Kommersant” and “Vedomosti” as well as confirmed the sources . It was noted that the place Naryshkin, the lower house can take the first Deputy head of the presidential administration Vyacheslav Volodin.

In the state Duma and surrounded by Naryshkin media reports about a possible resignation of the speaker until the last moment not taken seriously, considering this information “stuffing”. On last Sunday’s election, Naryshkin was elected to the Duma in single-mandate constituency in the Leningrad region, and also on the Federal list of “United Russia”. He didn’t want to leave the Duma,” and fought to maintain his post, said sources close to Naryshkin. In September, he met with the PACE delegation and discussed the resumption of cooperation of Russia with the organization. According to participants of the meeting, Naryshkin was personally interested in this meeting. Immediately after the election, on September 19, he, answering the journalists ‘ questions, said confidently that he was not going to refuse the mandate. Naryshkin met this week with the President, after the meeting he returned, “happy”, sure that will keep the chair, said the source in the Duma.

According to the law in the event of early termination of powers of the Deputy of the state Duma elected in single-mandate constituency, the Central election Commission shall appoint in the district elections. The vote shall be held not later than one year from the date of occurrence of the vacant Deputy mandate. 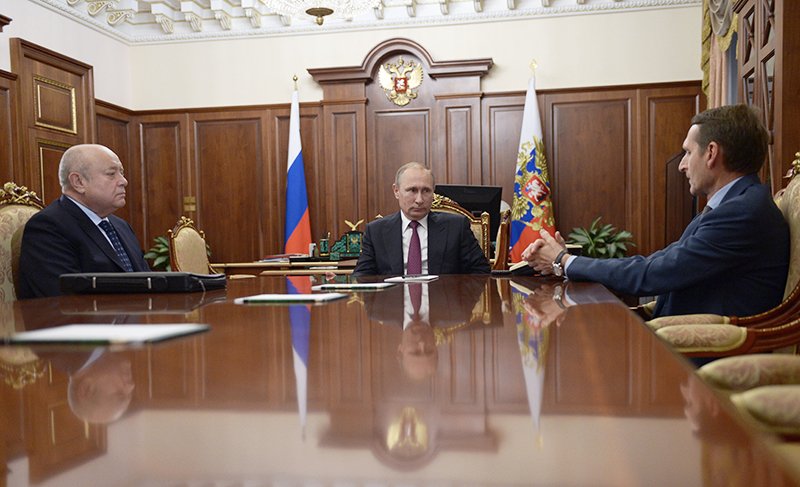 Mikhail Fradkov, Russian President Vladimir Putin and Sergei Naryshkin (left to right) during a meeting in the Kremlin

Who will head the Duma

The transition Naryshkin in the RAF, Volodin and the Duma was discussed in the summer, this option is convenient for all parties, says a source close to the Kremlin. Naryshkin is a good choice for the head of the SVR, which is the current head Mikhail Fradkov had to make age, said the source. Naryshkin — the native of intelligence, he was in the 101st school of the First chief Directorate of the KGB, c Vladimir Putin, and then worked in Belgium. Of all high officials, he is one of the most suitable candidates, said the source. Volodina is also logical to transfer to another job, because work in the Kremlin, then it would be awkward, he continues. In August, he replaced the head of the presidential administration, it was Anton Vaino, who was Deputy Volodin, when he was the head of the government apparatus. It is clear that nobody would be comfortable if they now changed places and Volodin would be subordinate Vaino, said the source . Volodin interesting public policy, said another source close to the Kremlin. According to him, work in the presidential administration does not involve publicity, so the transition to the Duma would be comfortable for Volodin. As the Kremlin official, he regularly communicated with experts and representatives of the parties held for journalists of closed briefings, and now all this work can be conducted in an open mode, said the source. The state Duma when Volodin could play a more prominent political role, says another source close to the Kremlin. A significant role in decision-making in recent times belongs to the security Council, it would be logical to balance its Duma, he said.

If Volodin will be the speaker for the Duma it will be good because it will strengthen its positions to, respectively, strengthen her, says political analyst Ekaterina Shulman. “He really wants to become the fourth person in the country,” she said. For Naryshkin SVR — a more natural environment than public policy, adds the analyst Abbas Gallyamov. “He’s more an administrator than a Parliament, which controls the deputies”, — the expert thinks.

When Volodin Duma will cease to be a “mad printer,” says political analyst Igor Bunin. “He is a rational and systematic man will all agree, so unexpected insane laws, suggestive of noise will be less,” concludes Bunin.

Where to go Fradkov

The strengthening of the importance of the Board of Directors in the corporate management of Russian Railways was largely laid by the predecessor. Kirill Androsov, says Sidorov: “the Foundation was fortified weight hardware and industry expertise.”.

“I personally was always struck by the awareness Arkady Dvorkovich about the details of the company’s activities, which people with its range of tasks could not remember. Moreover, its staff has participated in the work of the committees of the Board of Directors, which was exceptionally useful,” — said Sidorov.

Dvorkovich also if you have any additional Committee of the Board of Directors of Russian Railways on priority investment projects, which are based on the status of the Chairman of Council allowed to bring people from different departments and organizations. “Despite the somewhat more bureaucratic format of the discussion was on the merits and with maximum involvement of all stakeholders,” says the source .

Fradkov also experienced people, adds a source close to the Board. But this appointment means that Belozerova have to take on communication with the government: he will bear a large burden on economic issues — tariffs, etc., he adds.

Dvorkovich headed the Board of Directors even when Yakunin, but even then, he managed to achieve greater openness, the company has transferred through a press-service the General Director of the research Institute of railway transport Pavel Ivankin. Earlier Dvorkovich held in relation to Railways a more assertive stance and leading the Council, he became more understanding of the problems and became more cautious in his assessment, he said.

With the development in the Railways international lines of business the presence of such a heavyweight as Fradkov, the head of Council may only be considered “as a positive thing,” says Ivankin: “His international experience will bring new competence into the company.

The representatives of Dvorkovich and Russian Railways declined to comment.

With the participation of Yana Milyukova