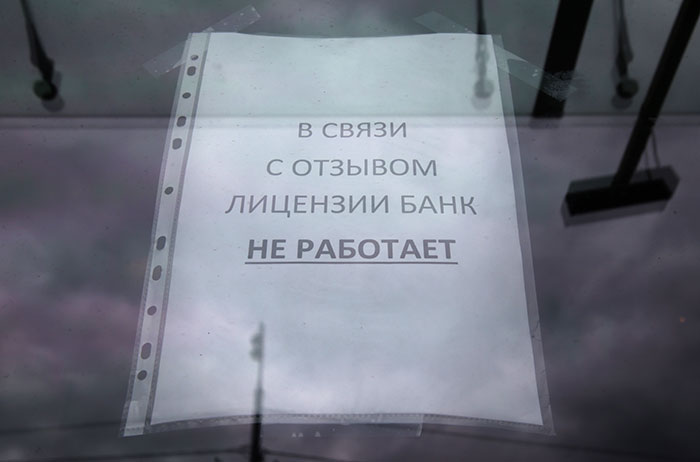 Moscow. September 26. The Bank of Russia revoked the license for banking operations of the Military-industrial Bank (VPB, Moscow), is spoken in the message of the Central Bank.

“With a poor quality of the assets of VPB inadequately assessed in connection with these risks. Proper assessment of credit risk and objective reflection of the value of assets in the financial statements of the credit institution led to a complete loss of its equity (capital)”, – stated in the message controller.

In addition, the Bank did not comply with the requirements of the legislation in the sphere of combating legalization (laundering) of incomes obtained in a criminal way and financing of terrorism in parts of timely reporting to the authorized body.

The interim administration in the face of the Agency for Deposit insurance, and came to his duties, faced with significant disruption, due to the actions of Bank management do not ensure the transfer of documents of title to the assets of the credit institution, said the Central Bank.

The Bank introduced a temporary administration until the appointment of a bankruptcy Trustee or liquidator.

Credit organization is the participant of system of insurance of contributions.

Payments to depositors will start no later than October 10, said DIA. Agent banks will be selected on a competitive basis until September 30.

In early September it became known that the Central Bank has cut the Military-industrial Bank from the system of reception of payments BESP. VPB has imposed restrictions on cash withdrawals from deposits and from Bank cards and stopped taking new money citizens.

The Chairman of the Board of Directors of VPB Yuri Colton told “Vedomosti” that the Governor actually stopped the work of the Bank. So, the financial institution cannot increase the balance on any accounts, and to withdrawals from the Deposit, it is necessary to transfer funds from the Deposit account to the current. VPB can no longer charge interest on the Deposit and credit the salaries and pensions. Also, the VPB is a limit on the turnover of means on accounts of legal entities – no more than 6 billion rubles a month.

Colton noted that the Bank sought clarification from the Central Bank, but received no response, in this connection, has submitted to Arbitration court of Moscow the statement for recognition of the decisions and actions of the Bank of Russia illegal.

On 16 September the Bank of Russia introduced a temporary administration in the Military-industrial Bank in the face of the ASV for a period of six months. The regulator has suspended the powers of Bank management bodies for the period of activity of the provisional administration in connection with the adoption of decisions on issues under their competence. Also, the Central Bank has limited the rights of founders of the Bank in connection with the participation in its Charter capital, including the right to convene the General meeting of shareholders.

The introduction of temporary administration was aimed at obtaining operational control over the activities of the Bank, this measure will allow to protect interests of depositors and creditors.

Military-industrial Bank in the first half of 2016 took the 98-th place by assets among Russian banks in the ranking “Interfax-100” prepared “Interfax-TSEA”. The liabilities of the Bank to physical persons on August 1, amounted to 30.7 billion rubles. . According to the Bank of Russia, on September 1 of the current year by total assets, this credit had occupied the 89th place in the Russian banking system.