Although the Russian economy in 2015 has decreased by 3.7% (and continues to shrink this year), Russia has again improved its position in the flagship ranking of global competitiveness, which prepares the world economic forum (WEF held annually in Davos in the middle of winter). Russia moved up two places and now occupies 43-e a place. The competitiveness ranking of the WEF is one of the few where Russia is steadily progressing, despite the economic instability and geopolitical tensions. In 2012, when Russia was occupied in the ranking of 67th place, she jumped already 24 degrees.

The rise in the ranking, which attracts the attention of the authors contributed to strengthening the quality and coverage of education (plus six positions), innovative capacity (plus 12 positions, albeit from a low base), as well as improving the business environment through further reducing administrative barriers. At the same time, the assessment of the macroeconomic situation and the availability of financing in Russia has deteriorated dramatically.

In the updated ranking of Russia surpassed Italy, which dropped from 43rd to 44th place, but behind Panama, held a year ago in the 50-th line. It’s a notable jump in India, which rose over the year by 16 steps and now occupies the 39th place. From countries of the former USSR, Russia is still ahead of Azerbaijan, Lithuania and Estonia.

Everything goes according to plan

In 2013, the government approved the “road map” to create an international financial centre and improving the investment climate in Russia. One of the benchmarks was to improve positions in the ranking of global competitiveness WEF is up to at least the 45th place by 2015, and by 2018 — to 30-second spots. In last year’s ranking Russia took the 45th place after completing the intermediate challenge. About the same place Russia takes in another prestigious ranking of economic competitiveness — according to Swiss business school IMD. This year Russia rose in this one position, moved up to 44th place out of 61 possible and settled between Slovenia and Mexico.

Growth despite the drop

WEF calculates its index based on the 12 dimensions — components of competitiveness: institutions, infrastructure, macroeconomic environment, health and primary education higher education and training, market efficiency of goods and services, labour market efficiency, financial market development, technological level, market size, business sophistication and innovation capacity. Russia fell from 51 positions — from 40 th to 91-th place — the macroeconomic situation, one of the four “basic criteria”. The authors distinguish two factors for this decline is the decline in state revenues (according to the Federal Treasury, they in 2015 fell by 0.8 trillion roubles, to 13.7 trillion) and inflation (for the last year, it reached 12.9 percent, the highest level since 2008).

But Russia climbed to 12 rows according to the level of institutional development, although this indicator still remained in the second half of the rating is on the 88th place. Another “benchmark” infrastructure, Russia’s position here has not changed (35-e a place). But in terms of “health and primary education country dropped six lines (62-e a place).

Competitiveness — it is a logical consequence of the economic crisis, says the Russian program coordinator of the WEF’s competitiveness, Strategy Partners Group partner Alexey prazdnichnyh. New market opportunities, in particular import substitution, “has spurred the business,” he said: “Crisis is always a reason to improve.”

Overall, the situation in Russia is stable — it is slowly closing the gap with other OECD countries, said Holiday. There are several key factors that allow Russia to fall in the ranking of WEF and “pull” it up. The first is the size of the market, according to him, Russia takes the sixth place. “This is a very important condition to improve performance, it is important for innovation, for economic development,” says Holiday. However, this potential might not fully implemented, as the continuing high share of imports, he adds. In addition to the large market of Russia wins and at the expense of basic infrastructure. Another important advantage is human capital, he said. But Russia is losing it to other countries at the same stage of economic development: in particular, the lifetime of qualified staff in Russia is much lower, they have more health problems.

Inflation was replaced by corruption

In the study, the WEF annually polls of business representatives regarding their assessment of national competitiveness. In 2016, the main obstacle for doing business in Russia, according to the poll, has changed: if in the previous years, business leaders have prioritized corruption, this year in the “leaders” came out inflation, which in the last five years had not risen above fifth place.

For entrepreneurs, the growth of prices and tariffs — the main problem 2015, confirmed by survey data of the Russian Union of Industrialists and entrepreneurs (RSPP). Concerns about inflation occurs because “companies do not pull this price increase,” says Vice-President of RSPP Maria Glukhova: “They are unable to fully pass inflation on to the consumer”.

But now inflation in the country is stable” and is in “safe hands of the Central Bank”, said President of “Business Russia” Andrey Repik. It provides a normal pressure on long-term and medium-term lending rates of banks, which is important to businesses,” he said. The rise in consumer prices this year slowed markedly, and officials expect less than 6% at the end of the year. The main problems of business, in the opinion of Repik, instability, short planning horizon and, as a consequence, unwillingness to take investment decisions. In addition, Russia is “dipped” in domestic demand — it is, by the end of 2015 decreased by 7.9%, according to Rosstat.

Corruption in the Russian businessmen surveyed by the WEF, fell to third place. “When we travel around the region and communicate with the business, we see that every year this topic sounds a little less serious”, — says the observations Repik. The level of perception of corruption really decreased, record the surveys of the RSPP. “We have this trend recorded a couple of years ago,” says Maria Glukhova. Concern about corruption is always in conjunction with the factors that create the opportunity for corrupt behaviour, some entrepreneurs feel the improvement, she said. 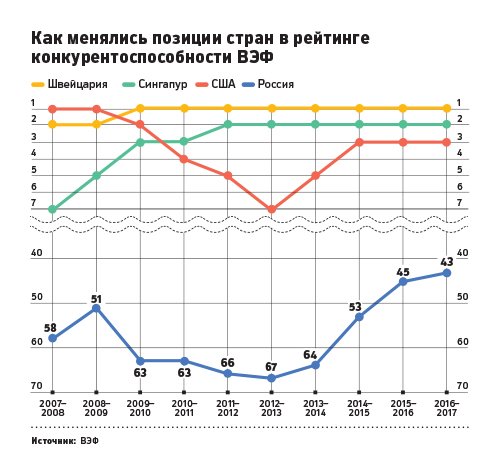 But corruption in the ranking of the problems of Russian entrepreneurs lost not only inflation — for the third consecutive year ranked second in the tax rate. “One and the same load may be perceived as higher when increasing the cost of debt financing and is not a very good situation with demand. What was perceived as adequate to the load in a more or less stable development is perceived as excessive when the economy is in recession or stagnation,” says Glukhov.

But now business is not so much worried about tax rates, says Repik of “Business Russia”. In particular, the concerns of entrepreneurs has decreased against the background of recent statements of the authorities, who promised in the next few years taxes do not change. Taxes can become more difficult for business in terms of reducing profitability, he said.

Another important issue for the Russian business — the lack of qualified personnel, says Glukhov. It is only in the second half of the list of the WEF, however, closes the top three, according to the Union.

Leaders from last year have not changed. The sixth consecutive year, first place is Switzerland, she leads four of the 11 key indicators of the WEF. Switzerland, as the authors note, combines an efficient labour market, innovation and high level business development. Second place is still occupied Singapore, and the third, the United States, the top five also includes Germany and the Netherlands. Sweden and Britain each rose three positions, beating Japan and Hong Kong.

Among Russia’s partners in BRICS, above all in the ranking is China (28th place). India is located on the 39th place South Africa in the 47th, while Brazil in the 81st. The rating is mainly African countries.