What and how did you prove the result?

28 September, during the presentation, the head of the Central criminal investigation Department of the National police of the Netherlands Wilbert Paulissen and the public Prosecutor of the Netherlands Fred Westerbeke showed pictures of contrails missiles launched. Investigators were able to link the photograph to the terrain and determine where the blow was struck. To more accurately determine the location of the installation “Buk”, the Commission interviewed witnesses who were near the locations of the combat vehicle.

The international investigation team (JIT) presented the first results of a criminal investigation into the crash of the Boeing Malaysia Airlines. The investigators found that “Buk”, which was shot down Malaysian plane, was delivered to Ukraine through the Russian border. Also JIT has identified a rocket launch site. According to the report, the missile that struck MH17, started with agricultural fields near the village of Pervomayskaya. After the attack on Boeing self-propelled gun was brought back to the territory of Russia, follows from the published report.

In addition to interviews, satellite images, data intelligence services of the USA and the Netherlands JIT operated a large number of videos and photos of the witnesses of the advancing column. The images were attached to a three-dimensional model, which illustrated the course of events.

According to the Professor of the faculty of law of HSE Alexander Domrin, this evidence can be accepted by the court only as indirect. “Some phone conversations, some facts of the movement of some equipment all indirect facts,” agrees member of the international Union of lawyers Valery Vanin.

What was the reaction abroad?

Foreign politicians are reluctant to comment on the results of the investigation of the crash of flight MH17. One of the first spoke member of the German Bundestag from the “Green” Marieluise Beck. “Even if we assume that the attack on the aircraft was the result of military mistakes, the political responsibility lies with the Kremlin and President Putin personally,” she said.

The official U.S. position was more restrained. “The United States welcomes the interim report of the International investigation team to investigate the crash of flight MH17,” — said state Department spokesman John Kirby. He stressed that the results of the investigation corroborate the statement of the head of Department, John Kerry, made a few days after the crash, that the plane was shot down by a Buk missile system controlled by Pro-Russian separatists territory.”

With the support of the JIT report was made by the head of the European external action service (EEAS) Federica Mogherini. “To bring to justice those responsible for the deaths of MH17, requires the continued support of the investigation by the world community”, — said Mogherini, adding that the independence and thoroughness of investigations is “critical”.

Moscow before the start of the presentation denied any connection of Russia or the breakaway republics with the crash of MH17.

In this case it is important to draw conclusions, given the recent information that has been published, namely the primary radar data, which recorded all flying objects that could start or be in the air on the territory controlled by the militias”, — stated the press Secretary of the President Dmitry Peskov told reporters an hour before the press conference JIT.

“No Russian anti-aircraft missile systems, including Buk, the Russian-Ukrainian border never crossed,” — said later in the afternoon the official representative of the Ministry of defense of Russia Igor Konashenkov. He put under doubt the results of the JIT’s work, stating that the basis of the report lie two sources: the Internet and intelligence agencies of Ukraine”.

More specific claims to the course of the investigation was expressed by adviser to chief designer of the concern “Almaz-Antey” Mikhail Malyshev: the Commission of inquiry was wrong in determining areas of damages and of course missiles. Malyshevsky said that in 2015 the Netherlands were targeted classified data which was not taken into account JIT. According to the “Almaz-Antey”, the rocket could be fired from the area South of zaroshchens’ke on the territory controlled by Ukraine.

As evidence of Moscow also quotes the testimony of a radar complex “Utes-T” in the Rostov region. The complex has not fixed the day of the tragedy starts on the territory of the breakaway republics, however, noticed the work of the Ukrainian air defense in the area of the crash, said on September 26 reporters the head of the radio-technical troops of Russian air force Andrew Coban. 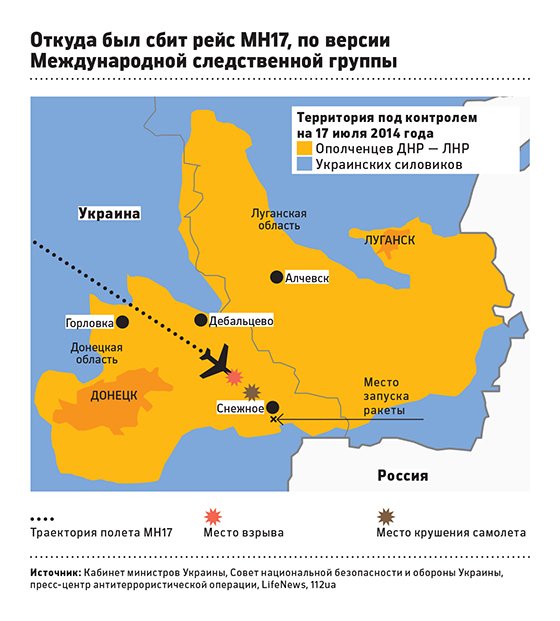 What and who is the threat?

In the end a press-conferences the public Prosecutor of the Netherlands Westerbeck announced the continuation of the investigation until 2018. Court for trial will be set after the JIT will generate a list of official suspects. Yet, according to the Prosecutor, in the list of about 100 people, involved in the transport and maintenance of “Buka”. According to Eric Toller, head of the Russian direction Bellingcat, the group gave JIT a list of military personnel involved in the transfer of “Buck” to the Russian-Ukrainian border. “JIT gives the suspect and those who know something, the ability to cooperate with the Commission,” says Toller. According to him, we are talking about immunity from prosecution.

The Commission has already started the search of the defendants in the case. JIT has published a number of telephone conversations between the two men with the call of Orion and a Dolphin. Earlier talks of a man with the call sign of Orion was published by “Novaya Gazeta”. The publication calls the Orion military Advisor commandant of the self-proclaimed LNR.

“This report is not placed properly in the legal space,” — said the Professor of RGGU Marina Filimonova. According to her, the JIT has not designated “participants in legal relations and object relations”. Filimonov argues that none of the four existing in the world of international courts will not allow the Netherlands to pass the threshold of continuity statements.

International law does not provide for the possibility to blame the state as a whole, emphasizes the Professor of international law Department of MGIMO Dmitriy Labin. “Responsibility for war crimes is individual, the verdicts will be imposed on specific individuals. You can’t blame Russia because Russia is not a party to the conflict”, — the expert believes.