Financial group Safmar (previously group BIN), manages the assets of the family Gutseriev-Shishanov, began the process of combining their non-financial assets on the basis of the company “Europlan”, said the shareholder Safmar and the head of Binbank Mikhail Shishkhanov. According to him, the combined company will include three main areas: pension business, leasing and insurance.

“We plan to pay for technical issue to Deposit in PJSC “evroplan” owned by us shares of TSC, as well as 100% stake in NPF “Safmar”. VSK insurance company belongs to Sergey Tsikalyuk (51%); 45% stake in the company in may 2016 purchased FG Safmar, paying for the transaction by assets of IC “BIN Insurance”.

The Association will be completed by the end of the year. The banking group of the Bank in the perimeter of the transaction will not be included. As a result, he expects, the market will be a public company with a market capitalization of over 60 billion rubles. and not rated below BB-. “Such financial structures in the Russian market there,” — said Shishkhanov .

According to the head of the Department for corporate financing of the company “Finam” Igor Belasova, increase the capitalization of the “Evroplan” will support the company’s shares traded on the exchange. He believes that, despite the consolidation of pension, insurance and leasing business within the same financial structure, will not affect the operating activity “Evroplan”. “On the contrary, by optimizing the management structure, the company will be able to improve their performance,” — said the financier.

Head of group Finance ACRES Kirill Lukashuk stressed that the allocation of non-banking financial business in a separate holding can be a step towards improving the sustainability of the whole group. “The banking business remains the most regulated and the most cyclical, in terms of risk profile, particularly given the current economic situation. “Therefore, from the investor’s point of view, for example, the design of a Bank holding company would be more sensitive to changes in the financial position of the Bank”, — said the expert.

From consolidation to SPO

He did not rule out that for increasing the capitalization of the company “Europlan” can spend additional placing of shares on the Moscow stock exchange until the end of 2016. However, after additional placement of shares of “Evroplan” group “Safmar” will remain its majority shareholder, he said.

In December 2015 the company has already placed 25% of its shares on the Moscow exchange, however, almost the entire volume (RUB 3.2 billion) was redeemed by pension funds of the BIN group and NPF “the Russian standard”. This follows from the disclosure of “Europlan”. Sberbank CIB analysts then noted non-market nature of the transaction. “Such investments nailuchshim meet the interests of customers, and there are signs of conflict of interests of customers and owners of pension funds”, — quotes their words to the newspaper “Vedomosti”. According to the publication, the funds could invest in “the Europlan” has more than 3 billion rubles. pensions on the basis of market quotations of the company.

For the NPF, which controls Shishkhanov, it’s a small deal. According to the Central Bank on June 30, 2016, the total assets of NPF Safmar amount of 185.6 billion rubles, including 177,3 billion rubles of pension savings. Given the NPF Doverie, which also belongs to the structures shishkhanova, all pension assets of the group amount to 258 billion rubles.

Fitch analyst Alexander Danilov believes that in case of carrying out SPO “Evroplan” his buyers can make including pension funds, as, for example, in the case of placement of shares of PSB he says.

“I do not exclude that if the company to return to the SPO, the share of minority shareholders may increase. I don’t think many will take advantage of the offer for sale of shares, since the company’s securities is liquid enough and show growth. We have the expectation that in the next year or two, this growth will continue,” says Balasov.

Wednesday, October 5, stock quotes “Evroplan” on the Moscow stock exchange fell by 0.6% to RUB 660 continues to Drop from Tuesday, when top management of the group Safmar held a meeting with analysts and investors, where, in particular, announced a plan to consolidate non-Bank financial assets. Starting in 2016, the shares of leasing companies rose by 89 RUB

Market participants and experts note that expected after the completion of the consolidation process of the financial assets the growth of capitalization of “Europlan” is not associated with the funding requirements of the company. Danilov from Fitch says “evroplan” given its high levels of capital and profits and a relatively low debt burden does not require additional investment. Capital of the company at 30 June of the current year compared to capital as at 31 December 2015 has increased by 12%, to 12 billion rubles.

Balasov notes that the additional placement of the shares “Evroplan” will not have a significant influence on quotations of its shares.

Managing Director of corporate ratings RAEX Pavel Mitrofanov said that the growth of capitalization of “Evroplan” will allow the company to increase its public debt. “Given the high rating of the company at level BB – to borrow at a lower rate in the market from other structures owned by Gutseriev-Shishkhanov, will not work. They simply do not have such a rating. To create a new public company is long and expensive,” — said the expert.

In this Mitrofanov does not exclude that the results obtained from investors can be directed to other projects not related to leasing, pension or insurance business.

Top Manager of a large investment company reminds that now “evroplan” intends to place 10-year ruble bonds for RUB 5 bn, the order Book is scheduled to open on Thursday, October 6.

Until the company has reduced borrowing. In particular, since the beginning of 2015 the volume of attracted credits decreased by almost three times, to RUB 3.3 billion Volume of circulating bonds of the company decreased from 14.49 billion to 11.8 billion rubles.

“Most likely, Shishkhanov need to quickly raise funds in other financial projects of BIN group. For example, in the banking business, which in the current situation is always in need of recapitalization,” said the source .

Mikail Shishkhanov — a : “Capitalization of the holding company will exceed 60 billion rubles.” 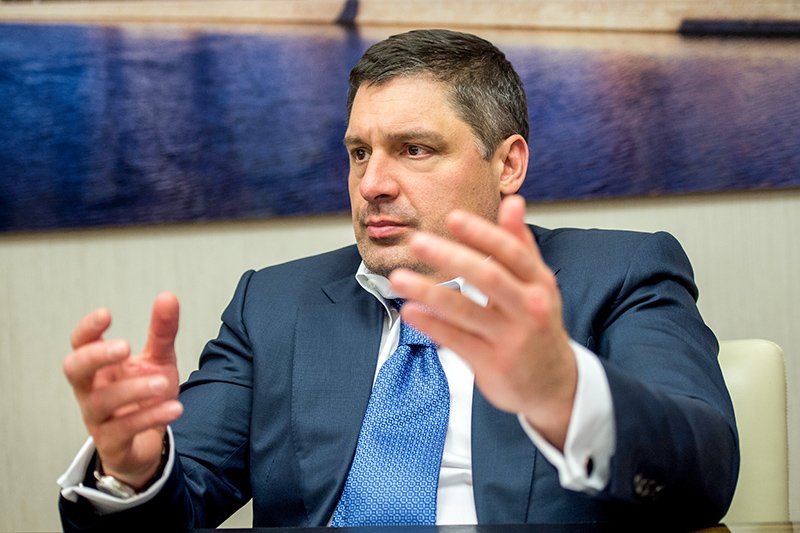 Mikail Shishkhanov, large-scale tested strategy of large transactions in the market of mergers and acquisitions in the past year in the banking sector, this year plans to merge their non-banking assets. In a short interview he explained the reasons for its decision.

— Why did you decide to make public all their financial company?

We have several goals. To create an effective and sustainable business structure that will continue to invest in financial assets with high credit rating. Then, in the Association we see significant synergistic effect, in terms of cross-selling and competences of the companies that will be included in the holding.

In addition, we want to be transparent and clear to the regulator and investors. Finally, we strive to provide them a return on their investment of 10 to 15% per annum. I think that’s really done, taking into account the profits which shows our leasing, insurance and pension business. The band Safmar the creation of a financial holding company, whose shares are traded on MICEX — it is also a good way of raising capital.

— How ambitious will the emission of shares of “Evroplan”? And how will this affect its capitalization?

— The amount of the emission depends on the valuation of our stake in VSK and NPF Safmar. Now execute it audit company from the “big four” (Pricewaterhouse Coopers, Deloitte, Ernst & Young, KPMG. — ). The organizer of the transaction, including the possible SPO “Evroplan” planned to appoint “VTB Capital”. After completion of all transactions of consolidation of financial assets, we expect the holding’s capitalization will exceed 60 billion rubles.

— What’s the share now belongs to the group “Safmar” in the FAC? And how much do you estimate its cost?

— We under the deal, 45% in the FAC, plus there is the opportunity to purchase a 4% stake in the company. We plan to increase our stake to 49% to the end of the year.

— Why a holding structure will not include banks? It’s kind of a strategic decision?

It is possible that later we connect and Bank assets, but now it doesn’t look reasonable. The banking sector carries high risks, investors find it difficult to adequately assess the capitalization of banks. To sell the banks with the estimate of polypetala we are just not interested.

— That is, until the IPO of the Bank should not wait?

— Now this is generally not the time to say; look at what is happening in the world, but after two or three years — we’ll see. No one knows how it will look banking market in the future.

It is hoped that the change of conditions: first, the Supervisory unit of the Central Bank will begin to assess not only financial performance, but also the business model of banks, that is, on what particular Bank earns. And secondly, the clearing of the market, which now holds, the regulator will give its positive effect: banks will be transparent, understandable and interesting to investors.

The Central Bank has almost completely cleared the market of those players who actively dumped, covering their “special operations”. For example, the same Master-Bank is almost fully destroyed in fact the market of services of collection. Fortunately, these dishonest banks in the market is getting smaller.

— Is there some synergistic effect from the Association of banks of the group? In what stage is the consolidation of banking assets, the accession of MDM Bank?

— This year we have combined the 5 banks. Additional income received due to the merger of group banks amounted to somewhere around 11 billion rubles. In 2017 we expect to receive another 4 billion rubles, when will be joined MDM Bank. To complete the process of consolidation of banking assets, attach MDM is planned by the end of 2017.

— Are you considering the purchase of new banks? In particular, recently, the media wrote about the interest of the group to Bank “GLOBEKS” and Communication-Bank.

— No negotiations on this score was not. It’s just a rumor. We had the idea that maybe it’s time to join with other banks to share share… of Course, when talking about banks with a similar business model. But we do not negotiate on this matter, still only thinking about it.

In November it is expected that the IPO will take place “RussNeft”. What proportion of the total you plan to sell to investors?

While we are talking about 10-15%. We’ll know more when the consultants will give their assessment of demand.