The increase in oil prices to $60 per barrel (currently around $53) would be enough to North American shale producers started to increase production, said on Tuesday, October 11, head of the International energy Agency (IEA) Fatih Birol in an interview with Bloomberg. If prices stay at $60, us companies can increase daily production by 1-1,5 million barrels. in a year and a half, Bloomberg cites the consulting company JBC Energy. In this case, the growth of shale production will block the effect of production cuts by OPEC members and countries outside the cartel who decide to join them.

“We can easily see in a short period of strong production growth in North America and other regions. Enough prices at around $60,” — said Birol. On the possibility of a rise in prices to $60 per barrel by the end of 2016 on Monday at the World energy Congress in Istanbul, said the Minister of energy, industry and natural resources Saudi Arabia Khalid al-falih. Brent futures have risen by 14% since the end of September, when the members of OPEC announced an agreement to limit collective production.

The head of “Rosneft” Igor Sechin to agree that the price of oil of $50 per barrel favorable to us oil companies, and at $60 the number of projects for the extraction of shale oil will increase. He said this to Reuters at an energy Congress in Istanbul. But the question is whether Rosneft, which accounts for 40% of all Russian oil production, to reduce or freeze production, Sechin said: “Why should we do that?” Later the press-Secretary of Rosneft Mikhail Leontyev said that the company fully supports the question of restriction of output the position of the President of Russia Vladimir Putin. Press Secretary of the President Dmitry Peskov called published by Reuters Sechin’s words out of context. 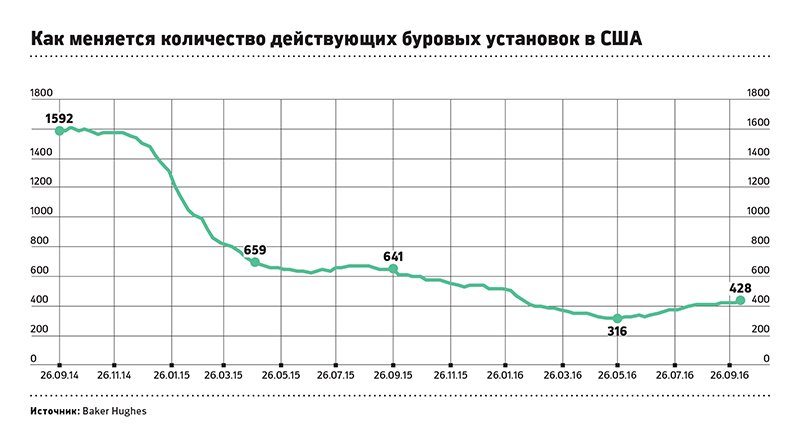 28 September, OPEC agreed to reduce oil production to 32.5–33 million barrels. a day (in September, according to the IEA, OPEC daily production was of 33.64 million Barr.). Compromise on the limitation of production of the cartel members managed to achieve for the first time since 2008. This means that OPEC “has refused” from the experiment with the free market pricing of oil, which lasted from 2014, said the IEA in its monthly report released on Tuesday. A day earlier, oil prices rose to the maximum since last November (above $53 a barrel), after Putin announced in Istanbul that Russia “is ready to join the joint measures to limit production and calls for the other oil exporters”. As at 21:00 GMT on Tuesday Brent and WTI was $52,23 and 50,63 per barrel, respectively.

In the United States over the past two years the construction of wells and their cost greatly reduced, so the production of shale oil sits on a launch pad in anticipation of rising prices, confirms the senior analyst Sberbank CIB Valery Nesterov. Moreover, because of the low price part of the industry suffered, and many companies have an urgent need to restore mining and fix its position, he adds.

In the event of a reduction in OPEC production are very high risks that will again push price swings — first, oil prices will rise, and then go down, warns Nesterov. Everything is more or less used to the price of $50 per barrel, and the next the fluctuation in prices will lead to economic instability and other inconveniences, he said.

The exact parameters of the transaction between the exporting countries is not yet developed. It is expected that this will be done before November 30 — the date of the next OPEC meeting in Vienna. As stated on 11 October, Reuters, OPEC Secretary General Mohammed Barkindo, the deal is likely to be calculated for six months with possibility of extension. Russian energy Minister Alexander Novak considers this a viable option, gave TASS.

Low oil prices have resulted in production in the United States declined from a peak of 9.6 million barrels. a day to 8.5 million barrels. by the end of September, data from the us Department of energy. But the number of active drilling rigs has already begun to recover from record lows achieved earlier this year. If in may the number of working drilling rigs in oil production, according to Baker Hughes, amounted to 328 pieces, last week: 428. Chief commodities analyst at SEB AB Bjarne Sildap believes that the number of working rigs in the United States will grow by about ten Grand a week until 30 November, when will the OPEC meeting. According to him, with increasing oil prices to $60 oil production in the U.S. will grow by at least 500 thousand Barr. a day by the end of 2017.