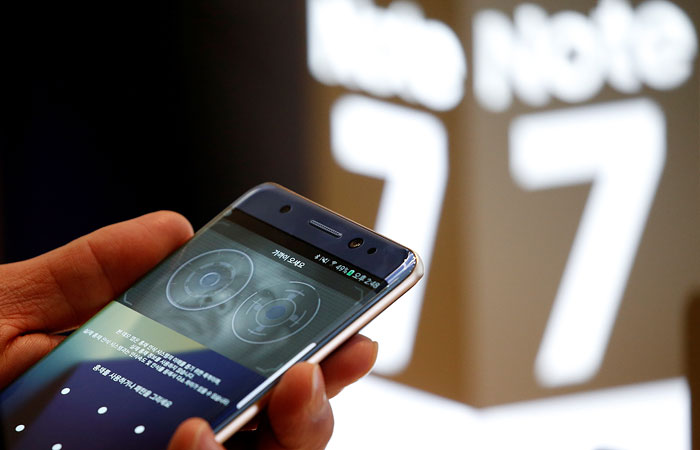 Moscow. 11 Oct. South Korea’s Samsung Electronics Co. on Tuesday it lost $17 billion of market capitalization after the official announcement about stopping all sales of the Galaxy Note 7 and the complete cessation of its production in connection with allegations that the fire devices are continuing even after the repair.

The company also urged consumers who have purchased the Galaxy Note 7, do not use devices and unplug their power, while experts are trying to understand the reasons of marriage.

Samsung Electronics shares fell 11 October at the fastest rate since 2008 – by 8%, to 1,545 million KRW, and market capitalization decreased to 217,35 trillion won (about $195,6 billion), according to the auction. Last Friday stock prices of Samsung Electronics for the first time in history rose above 1.7 million won.

By coincidence, at $17 billion, Credit Suisse analysts estimated the potential loss of revenue of Samsung in case of termination of sales of Galaxy Note 7 to 19 million smartphones cost an average of $882. Previously it was assumed that lost revenue and the costs of product recall from the market will not exceed $5 billion, while analysts proceeded from the full resumption of sales of Galaxy Note 7 in the fourth quarter.

Now it has become clear that Samsung will not resume sales.

Samsung on June 30 had cash liquidity of about $69 billion, is expected to allow the company without difficulty to absorb losses. However, this dual failure can negatively affect the level of trust of consumers to the products of the company, reports the BBC. Some experts believe that the failure has ruined the reputation of the entire line of Galaxy Note and downgraded the relationship to other models of Samsung phones.

“This case is the biggest I’ve seen in the segment of mobile phones for work all the time. No matter how much I worked on the market, this review I have not seen”, – said the head of the American operator Verizon Communications Inc. Lowell McAdam, working in the field of communication since the 1980-ies.

“Together with the relevant authorities we are investigating recent incidents of Galaxy Note 7,” – said in a statement.

On the eve of South Korean and Western media reported, citing sources, that Samsung has temporarily stopped production of Galaxy Note 7.

“Because our main priority remains the safety of the users, Samsung has asked all of its retail and wholesale partners around the world to stop the sale and exchange Galaxy Note 7 for the period, while continuing the investigation,” the company said.

Buyers who have the original Galaxy Note 7 or the updated model issued instead, it is recommended to disconnect the device, do not use it and try not to resort to whatever methods of correcting the defect themselves.

Samsung Electronics unveiled the Galaxy Note 7 in August and began selling it in South Korea on August 19. Then the smartphone was named one of the best Android phones. He was to become a major competitor to the iPhone 7 by Apple.

However, in September, was forced to suspend the implementation of these smartphones around the world and to withdraw the 2.5 million already sold devices due to reports of fire. Major airlines and the authorities of several countries, including Russia, urged not to use the Galaxy Note 7 is on Board and not check them in with Luggage.

Samsung from 1 October, has resumed sales of the Galaxy Note 7 is on the home market. However, users who already traded smartphones with possible problems in new, complaining that the device overheat during calls and the battery life is over too quickly.

At the moment we know at least two cases of ignition devices issued to consumers is defective.

Earlier, the us mobile operator T-Mobile said it would suspend sales of smartphones Galaxy Note 7, as well as exchange old models for new, “safe”. Refused to replace smartphones and other American operator – AT&T.