After a one year 2016 budget the government decided to revert to three-year cycle — the Finance Ministry believes that the only way to consistently and predictably to rectify the accumulated imbalance in the budget system. By the end of 2016, the budget deficit may reach 3.9% of GDP, which will be the largest gap in six years. The Finance Ministry wants to reduce it to 1.2% by the end of 2019. A return to a three-year budget cycle — ” < … > and too early for today’s conditions,” admitted on Wednesday, Russian President Vladimir Putin, speaking at the forum “VTB Capital” “Russia calls”. “Still, a dose of healthy optimism among the government present, and, of course, I even support that,” he said.

When the budget is approved?

The government will consider the draft three-year budget at a meeting on Thursday, October 13. It must still pass the approval of the Ministry of economic development. The project received the Ministry Wednesday, “the document is worked out,” said the Ministry spokesman.

The government plans to submit the draft triennial budget to the state Duma on 28 October, said Wednesday the Minister of Finance Anton Siluanov. By that time it may be adjusted, changes will probably be made in the course of passage through the Duma.

What are the main parameters of the budget?

Revenues in 2017 will be in nominal terms, almost at the level of the current year of 13.44 trillion (see table). In real terms, adjusted for inflation, they will continue to decline. However, by 2019, the Ministry of Finance expects growth in the revenue part to 14.8 trillion in nominal terms this will be a historic maximum. However, first, this expected growth is partly due to the weak ruble, budgeted for 2019 (71,1 rubles per dollar), while the price of oil is projected for all the three years at $40 per barrel. Second, budget revenues in relation to GDP will decline each year and in 2019 will drop to 15% (compared to more than 19% of GDP in 2012).

The total cost 2017 proposed $ 16,18 trillion, over the next two years — slightly less than 16 trillion. the Only way fiscal consolidation is cost reduction, said on Wednesday Siluanov at the forum “Russia calling”. But it turns out that the Finance Ministry still expects more revenue growth than cost savings. Compared with the assessment of expected execution of the budget 2016 revenues by 2019, growing at more than 1.4 trillion rubles., and the expenditure is reduced by 670 billion roubles it is necessary to consider the high cost base in 2016: at the finish of the annual budget of the Ministry of Finance decided to increase the expenditure from 16.1 trillion to 16.4 trillion, and given the expected changes in the so-called consolidated budget, which does not need to conduct through amendments to the law to 16.63 trillion.

As a result, the budget deficit in 2017 will amount to 2.74 trillion rubles, or 3.16% of GDP to the bill. The amendments to the 2016 budget submitted this week to the state Duma, the Finance Ministry proposes to register a deficit of 3.03 trillion, but expects that the gap will be more — about 3.26 trillion rubles That is, in the following year, the budget deficit could be reduced by 16%. 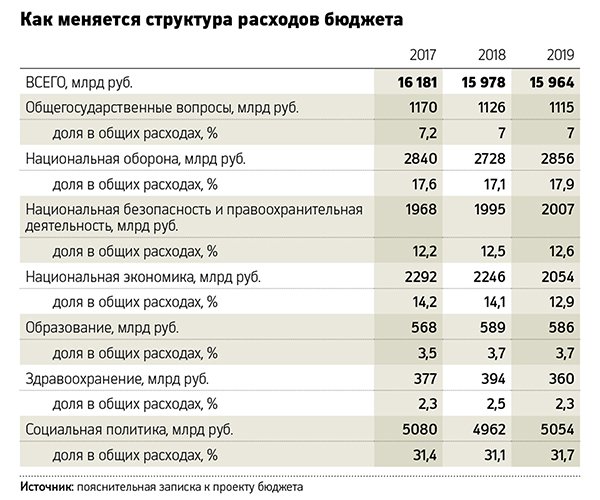 Additional income will attract and without tax reforms or raising the retirement age. “The ideology of the government not to increase taxes,” Siluanov said on Wednesday; on the contrary, the possible changes in terms of relief for business share of direct taxes. Significant growth of revenues, which counts the Ministry of Finance, realistic, believes Professor of Economics and Finance of the public sector Ranhigs Lyudmila Pronin. First, it is income from mineral extraction tax (Ministry of Finance estimated it at 300 billion rubles in 2017 and $ 200 billion in the next two years), the second increase in excise duties, and then, in 2019, probably raising taxes at the expense of unpopular measures, says Pronin.

As the Finance Ministry plans to Finance the deficit for the next three years?

From the Reserve Fund in 2017 to take on the financing deficit of 1.15 trillion rubles, and this means that the Reserve Fund will be completely exhausted. Will have to use the national welfare Fund (NWF), of which the Ministry of Finance wants to spend 660 billion rubles in 2017. The peak of NWF spending will be in 2018 at 1.14 trillion In a result by the end of the three-year budget in the budget deficit will remain around 3 trillion roubles (now it is 4.6 trillion rubles). To replenish sovereign funds during this period will not be — the implementation of fiscal rules was suspended until 1 February 2020.

In 2017 the Ministry of Finance sets the bar on foreign loans of $7 billion, as it was in pre-crisis years. Anton Siluanov explained that in principle, the budget could do without foreign loans, but you need to maintain the liquidity of the sovereign Eurobonds. In fact, the Ministry of Finance in 2017 to refinance expiring debt — to scheduled maturity securities by $7.3 billion In 2018 and 2019, it is planned to borrow $3 billion Strictly speaking, these figures for 2017-2019 not necessarily imply borrowing in foreign markets — it can be and loans in the Russian market in foreign currency.

Whether it is dangerous this amount of borrowing?

The government will increase domestic borrowing, said Wednesday Siluanov at the forum “VTB Capital”. But to do this, he said, should be cautious — it is important not to overreact, investors began to demand more short-term bonds and high interest rates.

Total public debt by the end of 2019 will rise to 16.6 trillion rubles, or 16.8% of GDP (compared to 15% of GDP by the end of the current year). In 2017 the Ministry of Finance plans to place in the domestic paper market by 1.88 trillion roubles (in 2018 is 1.6 trillion and in 2019 — 1.7 trillion). If geopolitical factors will not have a negative impact on the financial markets, despite the fact that the Ministry of Finance will place 1.9 trillion rubles, “they quietly get a lower yield, which may be at 7% by the end of the year,” says chief economist “PF Capital” Evgenie Nadorshin. In comparison with the volume of Russia’s GDP is 1.9 trillion rubles. it is a little debt “quietly” can be doubled within five years, creating the market no problem, says the economist.

In General, in the forthcoming period the volume of public debt of the Russian Federation “will remain at a safe level, less than 20% of GDP,” reads the explanatory note to the draft budget (have).

How much costs classified?

The open part of the budget for 2017 is for 13, 31 trillion rubles. This means that about 18% of all expenditures will be classified (roughly the same proportion will fall on a closed costs to 2018-2019). This is less than in 2016, following which the closing level of spending will exceed 22% (post-Soviet high). More than 500 billion rubles in the next three years the Ministry of Finance will direct on “certain subsidies” to companies and organizations, as well as “private transfers” regional budgets according to a secret budget to the bill.

In the context of the functional areas of budget expenses it is planned to spend next year on social policy — 5,08 trillion (see table). On section “national economy” are planned appropriations in the amount of almost 2.3 trillion rubles. “national defense” will require in the open part of the budget of about 950 billion rubles, and with the secret expenses of 2.84 trillion Is 27% less than planned to be allocated for national defense in 2016.

With the participation of Svetlana Bocharova