The meeting of the President of Russia Vladimir Putin, Merkel, French President Francois Hollande and the head of Ukraine Petro Poroshenko held in the office of the Federal Chancellor without the presence of the press. The footage, which showed journalists, it is clear that the leaders of Germany, France, Russia and Ukraine are sitting at a round table. Each of them is accompanied by two representative. 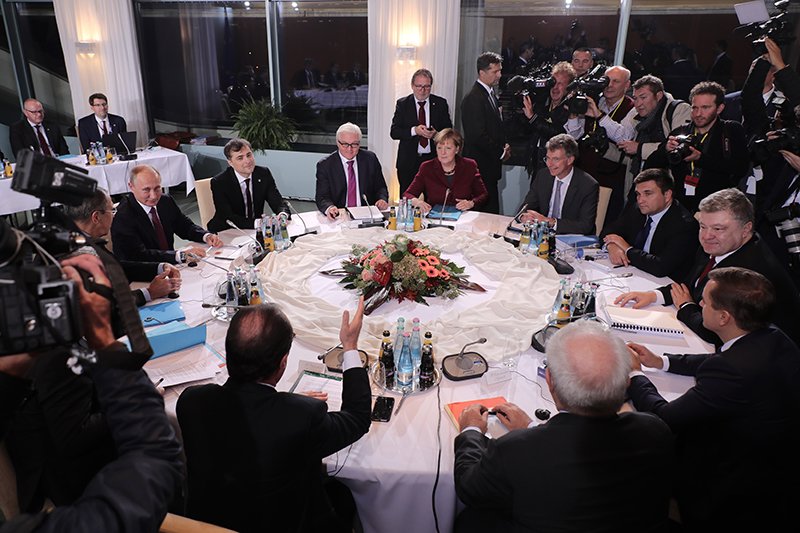 At the right hand of the leader sits the Minister of foreign Affairs Sergey Lavrov, on the left — assistant to the President Vladislav Surkov. He was included in the EU sanctions list in March 2014, therefore, according to the order of the European Union, was denied entry to EU countries, including Germany. TASS wrote that in the room there is also a Russian presidential aide Yuri Ushakov and press Secretary Dmitry Peskov.

Leaders of France, Germany and Ukraine also escort the foreign Ministers and other representatives. Prior to that, head of Germany and President Hollande and Poroshenko had separate talks on the situation in Ukraine.

During this meeting the sides plan to discuss the implementation of the Minsk agreements, and “further steps” to resolve the conflict in the South-East of Ukraine. In addition, after the meeting in the “Normandy format” Merkel, Putin and Hollande need to discuss the worsening situation in Syria.

Dmitry Peskov said yesterday that the best outcome of the forthcoming meeting would be the implementation by Ukraine of the Minsk agreements and the reasons that prevent this.

“In this case, the goal is to see where we are and to ascertain what prevents us to perform the Minsk agreement”, — said Peskov.

He said that the Kremlin doesn’t expect ‘breakthrough’ from talks

This meeting of leaders of Russia, Germany, France and Ukraine in “Normandy format” was the first for the year. The previous one was held in Paris on 2 October 2015. The Bild newspaper wrote that Putin’s visit to Germany was the first after the annexation of Crimea in 2014.

Poroshenko proposed to hold a meeting in the “Normandy format” at the G20 summit in China in the early of September. However, once in the Crimea detained Ukrainian saboteurs, Putin said about the meaninglessness of such a meeting at the summit.