The first meeting of heads of States and governments of Russia, Germany, France and Ukraine, as well as the foreign Ministers of these countries was held in June 2014 at the château de Bénouville in Normandy (hence the “Norman format”) during the celebration of the 70th anniversary of the allied landing in Normandy. The participants of the meeting discussed the confrontation in the Donbass and the consequences of the conflict for Ukraine’s economy. At the same time adopted an agreement to continue negotiations in this format.

Since then it has held 18 meetings at different levels with a total duration of more than 80 hours and a few phone conversations.

At the highest level in the Normandy format were held following the meeting:

The theme and outcome of the meeting: discussion of possible changes to the legislation of Ukraine changes, giving some regions of Ukraine special status. Press Secretary of the President of Russia Dmitry Peskov following the meeting, said that Putin and Merkel “had a very detailed “compared notes” on the implementation of the Minsk agreements, and “raised the issue of monitoring the ceasefire and the nuances discussed gas dossier”. 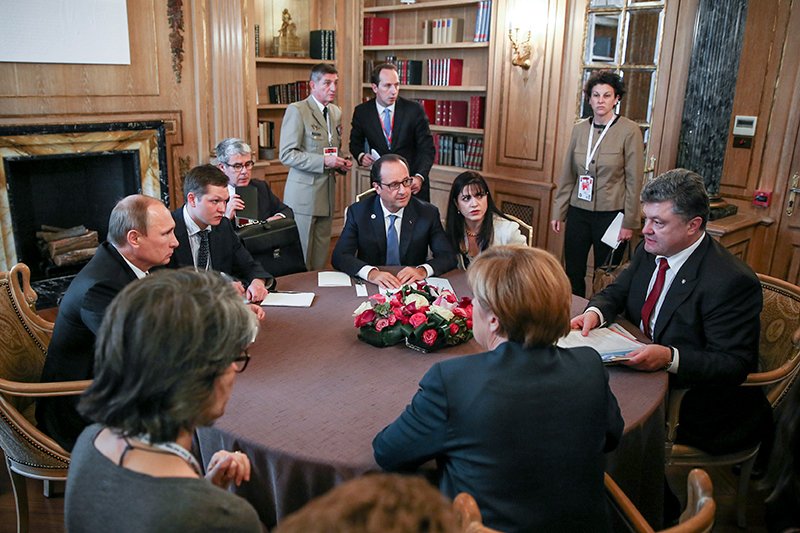 The theme and outcome of the meeting was accepted the second Minsk agreement, which was to ensure the implementation of the Minsk Protocol of 5 September 2014. In fact, the implementation of the Protocol was terminated in January 2015 due to escalation of the conflict. In addition to the cease-fire and withdrawal of all heavy weapons, the parties agreed on constitutional reform in Ukraine, including on the establishment of the special status of separate districts of Luhansk and Donetsk regions. Then began the withdrawal of heavy weapons from the contact line in the conflict zone began the work of the Special OSCE monitoring mission in Ukraine. 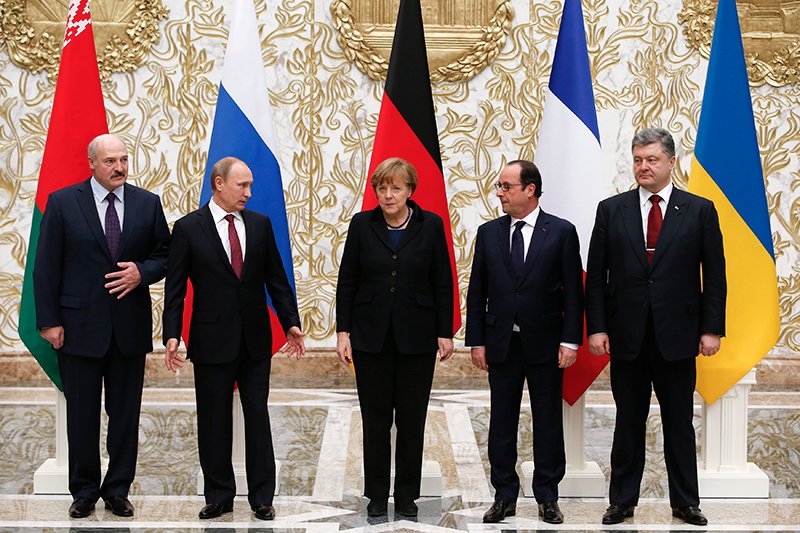 The President of Russia Vladimir Putin: “It wasn’t the best night of my life but the morning, in my opinion, good. Because we managed to agree on the main thing. We must proceed from the realities of life, and if all you want on a long term basis to build relationships, you have to go on direct contacts. But we worked in those conditions, which were agreed a lot”.

President of Ukraine Petro Poroshenko: “These agreements were developed and directly open a discussion with President Putin. And the Declaration that was stated immediately after, which was OK by me, Chancellor Merkel, President Hollande and President Putin, in effect, personally responsible for the fulfillment of the agreements. And this, I think, in fact, the main result of the present negotiations.”

The theme and outcome of the meeting was held to discuss the implementation of the Minsk agreements, including the issues of Amnesty and the holding of elections in the East of Ukraine. Were discussed the issues of withdrawal of heavy weapons, the parties agreed on the need for access of the OSCE mission to the whole of the militia-controlled territory in the Donbass, and also about the beginning of works on mine clearing of the territory of Donbass. 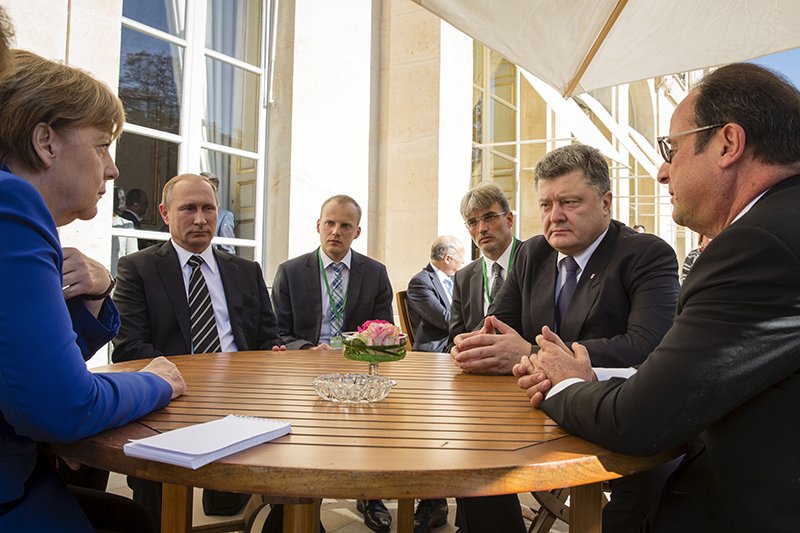 German Chancellor Angela Merkel: “we Can be satisfied with what we achieved at the meeting in Ukraine, the results focus on the positive”.

French President Francois Hollande: “with regard to the status of the Eastern regions (of Ukraine), the so-called special law for these areas, we agreed that this law will be applied from the day of the election. First, it will be temporary, then go into a constant phase, when it is clear that the elections are uncontested. We talked about such an important moment, like an Amnesty, which should be with the election and all candidates must be granted immunity during the election.”