The government refuse to agree to the requested by the Ministry of health budget for the implementation of priority projects from 2017 to 2025 in the health sector. For this purpose officials are willing to spend only 610 million rubles in three years (2017 to 2019), it follows from the explanatory note to the budget, which was reviewed . The Ministry of health counted on a far larger amount: 2025 he needed 182 billion rubles, said a source close to the Agency. This amount was included in the application of the national projects (have), which the Ministry of health has prepared for the meeting established by President Vladimir Putin’s Council for strategic development.

We are talking about five projects in the health sector (improving the quality of medical care to newborns and women during pregnancy and after childbirth, the development of sanitary aviation in remote areas, Informatization of healthcare, the introduction of monitoring the movement of drugs and training).

Only in the next three years, according to the request of the Ministry of health, the Agency planned to spend on the implementation of priority projects of about 32 billion rubles Agreed the government a sum of 52 times less than claimed.

On the implementation of the plans of the Ministry of health allocate less money compared to projects in other areas. For projects in the field of ecology, the government is ready to spend 62.1 billion in the education sector — 43 billion on projects related to mortgage and rental housing, will spend 21.8 billion, for the comprehensive development of single-industry towns — 9.4 billion, for housing — 5 billion roubles Worse position, compared to programs in the health sector, only the priority projects for the development of small entrepreneurship and the development of a safe and quality roads — the government did not plan money at all.

Of the 32 billion rubles, which asks the Ministry of health, the 16.9 billion they planned to spend on the purchase of childhood vaccines against chickenpox and rotavirus infection in 2019, 133 million perinatal centers, 1.55 billion — to the Informatization of healthcare in 2017-2018 (amount in 2019 is unknown), 3 billion — marking and monitoring of procurement of drugs, 9.9 billion for the purchase of so-called aviation services, to provide medical care in remote areas and another 610 million to educational projects. 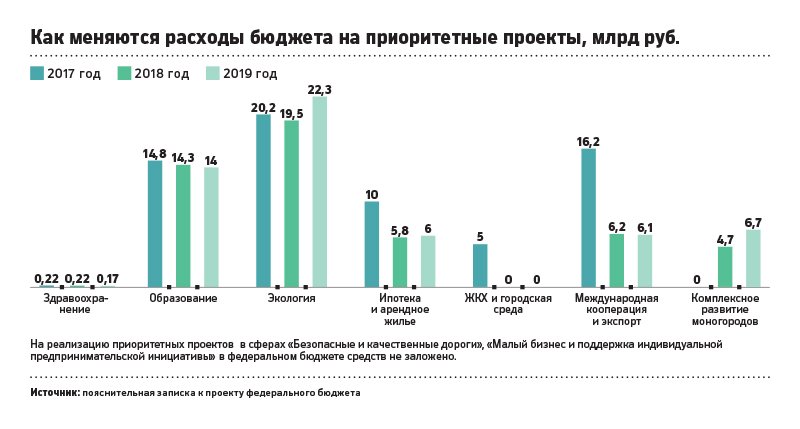 Distrust Of The Health Ministry

The discrepancy between the figures of the Ministry of health and the Ministry of Finance says the level of distrust of the quality management system of health, which was formed in the financial-economic bloc of the government, says the Deputy General Director of the pharmaceutical company STADA CIS Ivan Glushkov. “As for the priority projects — the agenda of the industry is different today. The Ministry of health apparently did not bother with the formation of new initiatives, and chose only what has managed to get orders but do not have enough money”, — the expert emphasizes.

Perhaps part of the money on priority projects for public health officials would find in other parts of the budget, suggested the President of the League of defenders of patients Alexander Saversky. But he is confident that the statement by the Ministry of health projects to allocate money to the extent that the Agency has planned, not worth it. “The priority projects of the Ministry of health — not a priority. The government may also understand that this is such a small amount for their realization”, — says Saversky.

The Ministry of health projects the funds are really needed only for the program of Informatization of health, the expert believes. Soon the inevitable transition to electronic document management and the advent of telemedicine is the possibility of holding remote patient consultation with the doctor. According to Saversky, such innovations would increase the availability of medical care, therefore, to spend money on information technology need.

The current trend is to reduce funding for various projects on health, in particular, the government is prepared three times to cut spending on the program for health protection of mother and child, reminiscent of Saversky. Vedomosti, citing Federal officials had previously reported problems with the formation of the budget of the compulsory health insurance Fund: RUB 71 billion is not enough for the implementation of the may decree of the President about increase of salaries of medical workers.