Two weeks of the campaign

Monday, October 24, began the second week of the military campaign, Iraqi, Kurdish forces and their Western allies for the liberation of Mosul from Islamist militants. At the same time this approach has acquired a qualitatively new character. First, opposing the ISIS (banned terrorist group) troops have almost completed a forced March through the desert, approaching Mosul from different directions. Secondly, the Islamists have moved from the organized retreat to the tactics of counterattacks.

“We are entering the last battle for the liberation of their territory, and the operation to regain control over Mosul is now ahead of schedule,” — said on Monday night Prime Minister of Iraq Haider al-Abadi.

In fact, it is the largest military operation in Iraq since the overthrow of Saddam Hussein. For the first seven days of the campaign, said Monday the representative of the Iraqi joint command center operation were killed 772 militants LIH, another 23 were captured. During this same time, the coalition forces freed 78 settlements, found two factories for the manufacture of bombs, destroyed 127 cars with planted explosives and nearly 400 improvised explosive devices.

On the basis of different estimates of the loss of the Islamists for the first week ranged from 5 to 15% of all ISIS forces involved in the defense of Mosul. In January 2016, CNN claimed that the city and the surrounding area are up to 10 thousand. In June, former Vice President of Iraq Osama an-Najafi reported about 12 thousand fighters of ISIS: 5 thousand of them are located in Central Mosul, another 7 thousand — in the suburbs. In October, CNN referring to the Pentagon wrote that in the battle for Mosul is involved about 5 thousand Islamists. Confronts them about 30 thousand Iraqi and Kurdish troops (casualties of the coalition forces are not reported).

At the same time, over the past two days Iraqi and Kurdish military said that their troops went directly to Mosul. In the East they occupied the city Bartalla 10-15 km from Mosul and move on. In the northeast the Kurds on Sunday liberated the city of BA’shiqah 10 km from the city limits and walked a few miles away. In the North front line is just 5 km from the entrance to Mosul. Offensive here are the Kurdish armed forces Peshmerga, together with the counter-terrorism unit of the Iraqi special forces.

As told Reuters the Iraqi military, in the beginning of the operation, the Islamists managed to slow down the advancing coalition forces, arranging remote explosions and using suicide bombers. However, adding the military, the army received at the disposal “effective missiles aimed blow”, is able to remotely destroy bombs cars. Given this and the previous momentum of the offensive, urban combat may begin after a few days.

For street fighting in Mosul, the Iraqi army has already developed tactics. First it is planned to surround the city (that is, to cut off any supply through the nearby villages), then cut the metropolis into several blocks, which are then stripped from the militants.

Meanwhile, the Islamists to the beginning of the week took a different tack, trying to divert attention from the battle for Mosul. On Friday more than 100 militants attacked Kirkuk, capital of the oil region in the rear of the Kurdish army — more than three days of fighting with security forces in the streets of the city. By Monday, the secret service destroyed most of the jihadists and thwarted the attack.

On Sunday, the Islamists attacked the town of al-Rutba on the other end of Iraq, near the Jordanian border, and on Monday the Kurdish troops repelled the attack by ISIL militants on the town of Sinjar, which is located 100 km West of Mosul, halfway to the border with Syria. At the same time, according to one of the local tribal leaders every day, dozens of ISIS militants along with their families move to Syria along the corridor to the South of Sinjar.

However, as noted earlier, the senior lecturer of the Department of political science school of Economics Leonid Isaev, there is evidence to the contrary movement of fighters from Syria towards Mosul to strengthen groups in the city. “According to this, to take Mosul, the militants are not going that promises anti-terrorist coalition the actual siege of the city with a lot of accompanying problems,” adds the Arabist.

In addition, on Monday on the side of the Iraqis in the battle for Mosul has officially entered Turkey. According to the head of the Turkish foreign Minister Mevlut Cavusoglu, the Turkish artillery for the past week killed 17 jihadists. This is hardly the first official confirmation by Ankara of its participation in this operation. The Turkish army is a military base near Mosul, where, according to the official, conducted the training Kurdish troops before the attack on Mosul.

The participation of the Turks in the operation subsequently denied Iraqi Prime Minister al-Abadi: “the Planning and execution of operations involved only the Iraqis and foreign forces there. We do not want the participation of the Turkish army, and claims Ankara to participate in the battle about”. This statement was made after the meeting, al-Abadi with the head of the Pentagon Ashton Carter, which in particular were discussed and the intervention of Ankara in the battle for Mosul.

A few kilometers from Mosul 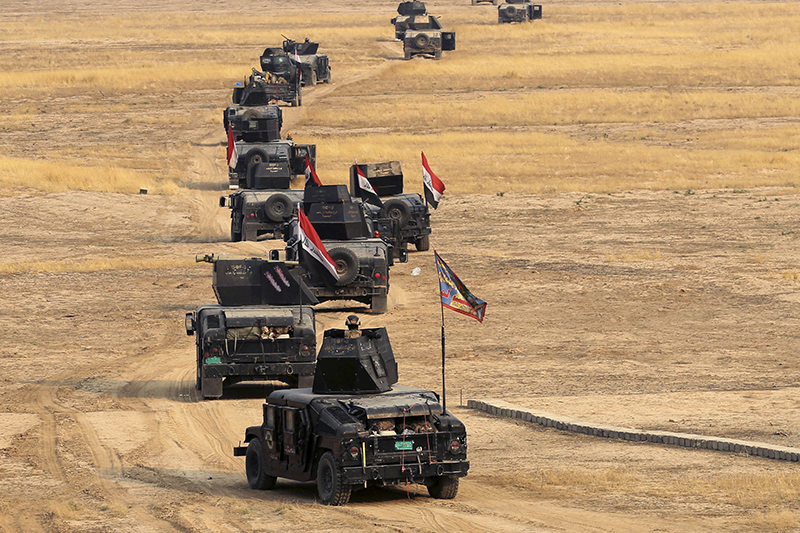 October 4, the Iraqi army and the Kurdish forces came close to ISIS controlled (banned in Russia as a terrorist organization) to the Iraqi city of Mosul. A large-scale operation on his release began on 17 October. On the photo: car of the special forces of the Iraqi army are moving towards the Mosul, on 24 October 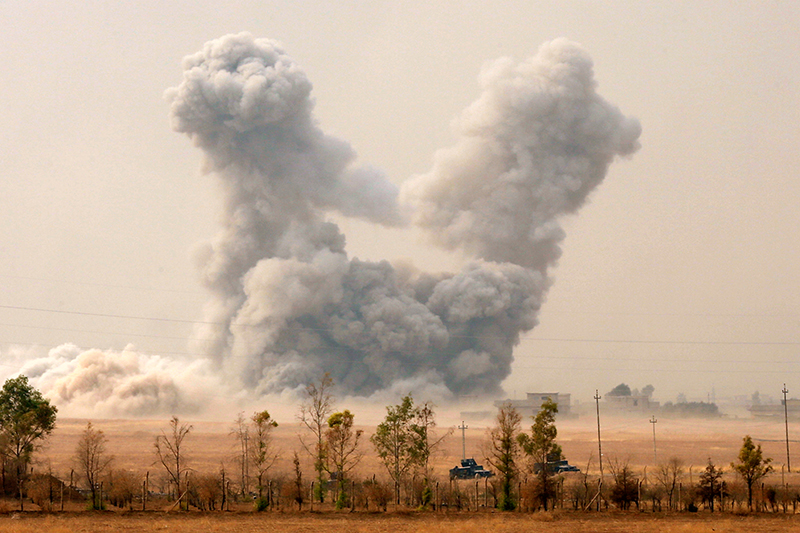  In the North-East of Mosul (10 km), the Iraqis and the Kurds have seized the city of BA’shiqah and has progressed a few kilometers. The representative of the Kurdish commanders Jabar Yawar said that on the Northern front, the Kurds went to Mosul in the distance of 3-5 km. photo: explosions in the vicinity of Basici after an airstrike by the US air force, 24 Oct 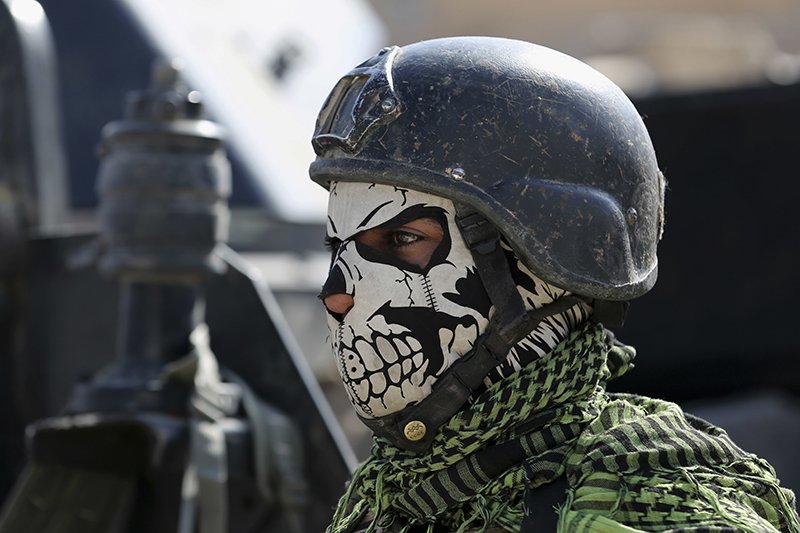  In the East as a result of the captured city Bartalla located 15 km from Mosul. The promotion of the Iraqi army and the Kurds continues. Photo: a fighter of special forces of the Iraqi army in Bartella, 23 Oct 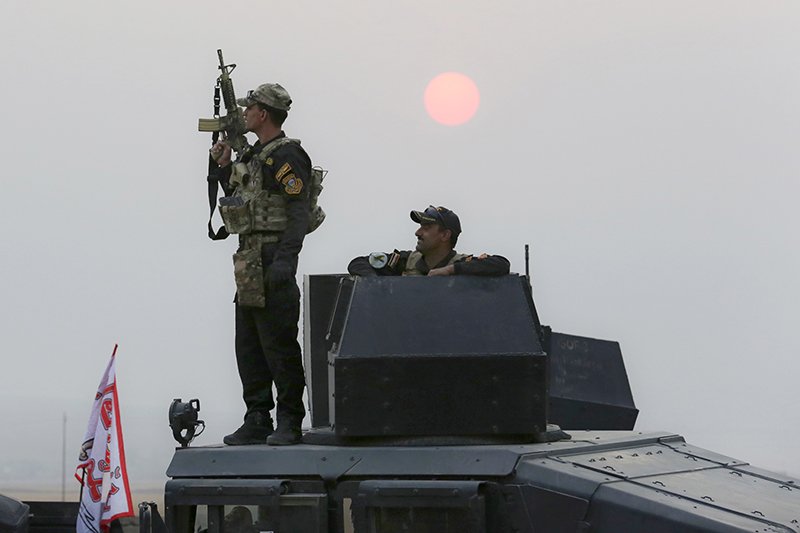  October 24 to join the battle for Mosul said the Turkey. According to the Prime Minister of this country of Binali Yildirim, Turkey supports the Kurdish forces with artillery and tanks. However, the Iraqi authorities denied the involvement of the Turkish side in the attack. Photo: special forces soldiers of the Iraqi army under Mosul, 24 Oct  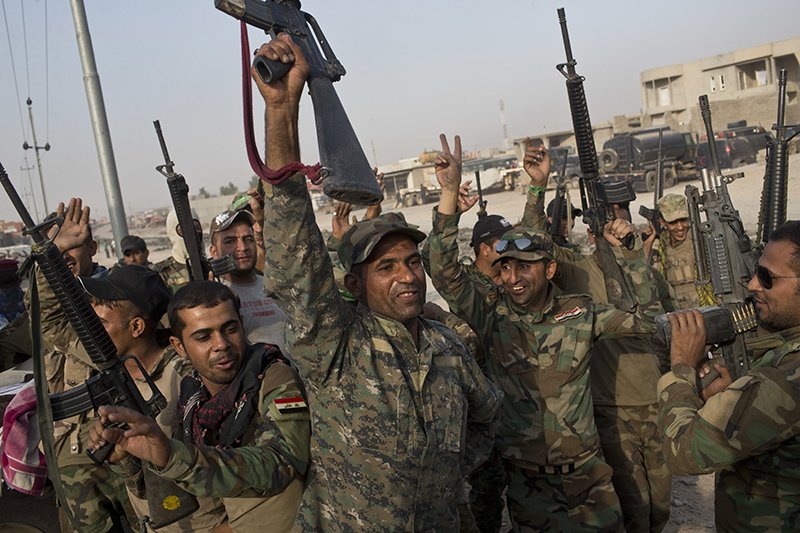 The command of the Iraqi army is already thinking about how to conduct street fighting in Mosul. The military plans to “cut” the city into several parts, and then cleaned these areas from militants. According to Iraqi government, Mosul and its environs are defending more than 10 thousand terrorists. On the photo: soldiers of the Iraqi army in the third day of the offensive on Mosul, 19 Oct