Sunday in Caracas, the Venezuelan Parliament is the national Assembly gathered in extraordinary session. It lasted four hours. The Parliament, which in December 2015 opponents of President Nicolas Maduro received a two-thirds majority, approved a list of initiatives aimed at the removal of the head of state from power.

The deputies threatened to send the President on trial for usurpation of power and called on the army of Venezuela, which maintains loyalty to Maduro, to disobey him. The opposition also made an appeal to the international criminal court to start proceedings against Supreme court judges and members of the electoral Commission, which, in their opinion, took the side of the usurper.

On October 25 the national Assembly plans to discuss the constitutionality of the Board Maduro, and on 26 October the opposition has planned a large-scale protest, which encourages participation of citizens. This day was supposed to start another round of collection of signatures in support of holding a referendum on the removal of Maduro from power. But on 21 October, the Venezuelan electoral Commission refused to register the signatures in support of holding a referendum, because the local courts have recognized some of them fake.

In addition, a new round of confrontation in Venezuela has caused the injunction to the eight opposition members to leave the country. The situation escalated and carried over to the following year election of state governors — initially the elections were scheduled for December.

“The government has carried out a coup, it intends to steal the votes of Venezuelans,” said Sunday opposition lawmaker Julio Borges. “Faced with the fact that the Constitution is no longer valid, we as a Congress to announce his rebellion”, he added (quoted by Bloomberg). Maduro still remembered the possible nationality of Colombian — Venezuelan law, persons with dual citizenship is forbidden to hold the office of President. However, evidence of Colombian nationality Maduro, the deputies are not presented.

The Sunday session was interrupted about half an hour, when the Parliament building broke about hundreds of supporters of Maduro. They left the building only after the request of the Deputy, a socialist, a supporter of President Jorge Rodriguez. Opposition later reported that during the clashes several deputies were injured, and the media reported that the journalists had stolen the camera. 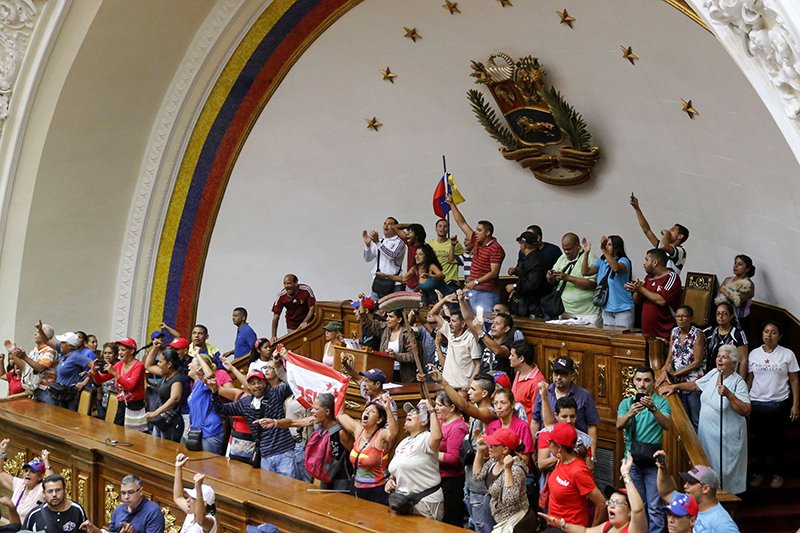 Supporters of Nicolas Maduro in the Venezuelan Parliament

BBC News interviewed experts believe that the adopted on Sunday a resolution of Parliament have only a declarative character. The head of state is a four-day tour of oil-producing States. In his video message from Saudi Arabia Maduro declared the unconstitutionality of the actions of the opposition.

The powers of the President expire in 2019. For his early ouster, the opposition intends to hold a referendum, the process of which is divided into several parts. In June, the President’s opponents failed to collect the signatures of 1% of voters in Venezuela in support of the plebiscite. The authenticity of these signatures was questioned by the courts and the electoral Commission.

The second stage is required to collect the signatures of 20% of voters in each of the 24 States of the country — just 4 million signatures, and for three days, the first of which was to be October 26.

Directly on the referendum, the opposition must garner support from a larger number of Venezuelans than voted for Maduro in the presidential elections in April 2013. According to BBC News, it is more than 7.5 million voters.

“The opposition will seek to hold a referendum as soon as possible” — says leading researcher of the Institute of Latin American Academy of Sciences Emil Dabagyan. According to him, this is due to Venezuelan law. If Maduro will lose a referendum in 2017, the new head of state before the next election, which will take place in the usual terms, will become Executive Vice President Aristóbulo Isturiz also. However, if Maduro loses the referendum until January 10, 2017, will be held in Venezuela early presidential vote.

According to Dabagyan, opposition, Maduro and Assembly deteriorated, because the Executive power is managed through family connections largely subordinate courts. However, the protest has natural features. “The opponents of Maduro no leader and program. We are talking about the broad coalition of opposition forces under the auspices of the “Roundtable of democratic unity”, — said Emil Dabagyan.

Venezuela in may of 2016 lives in a state of emergency. The reason for its introduction was the conspiracy to overthrow the government, explained the President. Initially, a state of emergency was supposed to last two months, but since then it has been regularly extended.

Now the ratings Maduro are multi-month low, hovering around 20%. The main reason is the economic problems. This summer, the international monetary Fund predicted that the country’s GDP in 2016 will be reduced by 10%, and inflation will reach 700 percent. The economy did not grow in 2013. According to experts, from October to November Venezuela has to pay up to $5 billion as government debt. The refusal to pay will trigger default and threatens Maduro even greater drop in popularity.

The confidence of investors manifested in the fact that from the beginning of 2016 Venezuelan government bonds have become one of the most profitable and their profitability, according to the Wall Steet Journal, reached 46%. Total public debt and debt of state-owned oil company PdVSA edition was estimated at $65 billion. For comparison, the gold reserves of the country are estimated at $12 billion.

In 2015 and 2016 the world’s media has repeatedly reported on the shortage of food and basic consumer goods in Venezuela. The control of the state and military over the economy led to a flourishing black market and journeys of ordinary Venezuelans in neighbouring Colombia for fuel and food.

At the end of October, PdVSA, warned creditors that in case of their refusal to exchange the bonds for a similar paper pending maturity, the company may declare a default. The problems of the state oil company may involve “Rosneft”, which in Venezuela large-scale projects. In July, Rosneft has signed several agreements with Caracas, the Minister of energy, Eulochio del Pino praised the investments of the Russian company at $20 billion. Then the representatives of “Rosneft” refused to clarify the terms of the investments and their mechanism. In October, the Agency AVN wrote that $20 billion will be invested in improving the performance of the five companies that are mining in the area of the Orinoco oil belt. The Agency has not announced their names and the structure of the transactions.

“The actions of “Rosneft” in Venezuela, explains how the economy and politics,” — said the analyst of “URALSIB” Alexey Kokin. The analyst believes that Caracas could involve “Rosneft” to work with heavy oil as the Venezuelans themselves do not have enough resources. Kokin does not exclude that “Rosneft” can use heavy Venezuelan crude oil for refining at the newly acquired Russian company oil refinery Essar Oil in India.

At the time of delivery of the material the representative of Rosneft did not respond to a request .