At the end of September the Levada center conducted a survey on the attitude of Russians to Ukraine (available). Sociologists asked respondents about the interest in the Ukrainian agenda, the support of Crimea and against Ukraine. The survey was conducted September 23-26, 2016, on a representative nationwide sample of urban and rural population among 1600 people aged 18 years and older in 137 localities of the 48 regions of the country.

As sociologists have found, more and more Russians in favor of visas with Ukraine, although the interest of the respondents to the Ukrainian agenda is falling.

More and more Russians in favor of the introduction of visas with Ukraine, according to the survey. “Russia’s relations with Ukraine should be the same as with other States — with closed borders, visas, customs” — in September 2016, said 39% of respondents. 48% of respondents advocated that “Russia and Ukraine should be independent but friendly States — with open borders, without visas and customs”. 8% of Russians wanted unification of the two States.

In March 2014 (change of power in Ukraine, the annexation of Crimea to Russia) for a visa with Russia is two and a half times less than the Russian respondents — 16%. 50% wanted to continue visa-free friendly relationship, 28% wanted to be unified in one state.

In Ukraine, estimated earlier in the Kiev international Institute of sociology, in September 2016 the majority of the respondents (49%) wants the introduction of visas with Russia. Slightly fewer — 43% — in favor of visa-free relations. 3% want unification States. This is a significant deterioration of relations with the country since February 2014. Then the introduction of visas with Russia wanted 15% of the respondents, 68% advocated the preservation of a visa-free regime, the desire to unite the country’s divided to 12%.

In August 2016, Ukrainian foreign Minister Pavlo Klimkin said that Kiev is ready to consider the question of introducing a visa regime with Russia. In response, Russian Prime Minister Dmitry Medvedev admitted that President Vladimir Putin can make the decision to break off diplomatic relations with Kiev. 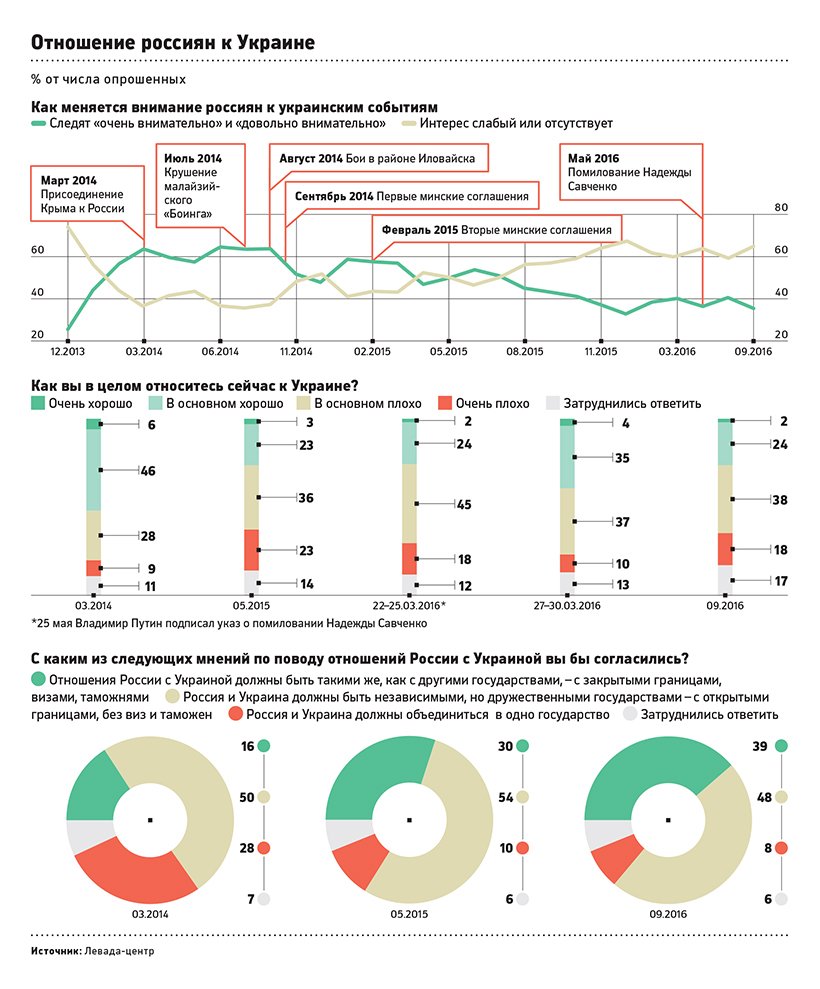 In August 2014 “very closely” and “carefully” followed the latest events in Ukraine, 64% of respondents sociologists, it follows from the results of the survey. “No special attention” and “completely watched” the Ukrainian agenda 36% of respondents. August 2014 — the time of fierce fighting Ukrainian forces from Pro-Russian militias in the Donbass. In September this year, after several years of defeats of the armed forces of Ukraine, the parties sign the first agreement in Minsk.

By September 2016, the interest of Russians to the Ukrainian events has decreased almost twice. “Very closely” and “carefully” follow the latest events in Ukraine, 35% of Russians. “No special attention” and “absolutely do not watch” 62% of respondents.

Political analyst Konstantin Kalachev said that the decline of interest in the topic associated with the natural fatigue of the Russians and the change of “information dominant”. “The laws of the drama are such that without further loss of life Ukraine is not interested. The whole set of reason was. And military tensions there is not in the interests of Russia. On the contrary, for the Russian authorities it is desirable gradually to change the record to a new one. This is papillas and jammed, — the expert believes. Information pressure decreased, and the theme itself is unchanged fed up. Even fans of the series want some new plot twists. And fans of blockbusters already disappeared”.

According to Kalachev, stable stereotypes of Russians on the Maidan, “Americans in the Ukraine and Russophobia the Ukrainian authorities” already formed, so “to escalate further in the former regime makes no sense.”

Support accession of the Crimea reduced

Sociologists have estimated the dynamics of support for the annexation of Crimea to Russia over the past two years. 16 March 2014 a referendum was held on Crimea’s status, on the basis of which the Crimean authorities have signed with the Russian side the contract on joining to Russia.

A decline of several points available, but the majority of them still support the annexation of Crimea, says Deputy Director of “Levada” Alexei Grazhdankin. “The issue began to be forgotten, loses relevance and becomes a moment of history, the attitude towards accession is now more calm,” — says the sociologist.

The Ukrainians are better

In early 2014, the attitude of Russians toward Ukraine has deteriorated dramatically. The sharp decline of trust in neighbors was recorded by sociologists in the background of the change of power in Kiev in February 2014, the March annexation of Crimea to Russia and the beginning of the antiterrorist operation (ATO) in the Donbass.

In September 2013, 69% of Russians treat Ukraine “very good” or “mostly good”. “Basically bad” and “very poor” at 23%. In November 2014, the negativity of the Russians against the neighboring countries reached a peak in recent months values: only 28% expressed a positive attitude, 59% belonged to the country “basically bad” and “very bad”.

In September 2016 the majority of Russians still refer to Ukraine is bad. Only 25% say about the neighboring country “very good” or “mostly good”. 56% of respondents give negative reviews. “Depending on the agenda, the attitude of Russians to Ukraine ranges. A small increase in positive responses indicates that the wound is starting to heal a bit, but is still quite fresh, and is dependent on the information there,” says Grazhdankin.

According to the Kiev international Institute of sociology (the results are listed in the “Levada”), the Ukrainians are Russians better. In September 2016, 40% of respondents talk about the neighbors “very good” or “mostly good”. And 46% — “mostly bad” and “very bad”. This is despite the fact that sociologists of KMIS not interviewed the residents of Crimea, Donetsk and Luhansk, where for Ukrainian history was recorded as friendly attitude of respondents to Russia.

Grazhdankin said that the Ukrainian society after the war, remains divided on the attitude to Russia about equally. Half of the respondents continued to respond positively to the neighbors, despite the events of the past two years, the other half focused on the West and distancing from Russia. “The persistence of such sentiments, despite the propaganda in the country, shows the value heterogeneity of Ukrainian society. We have seen this even in the elections in 2000-ies, when Viktor Yanukovych fought the elections with Viktor Yushchenko,” says Grazhdankin.

The situation is tense

Grazhdankin said that the respondents feel the potential danger of a new round of conflict, anxiety increases when the messages of the Ukrainian side about “Russian aggression” in the region.