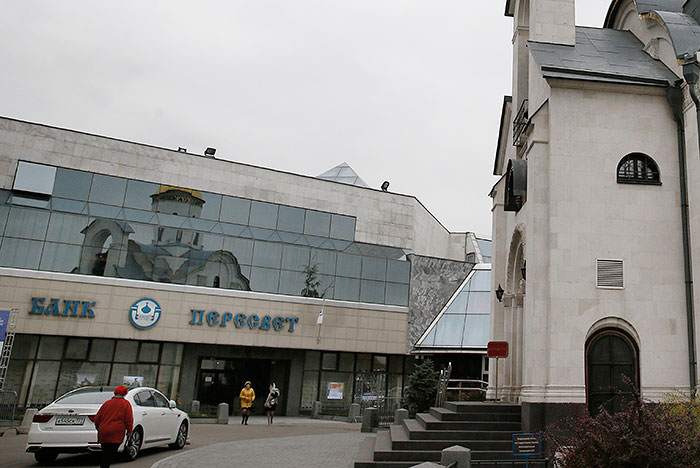 Moscow. 28 Oct. In the Russian Orthodox Church has declared groundlessness of attempts to connect directly with her troubled Bank “Peresvet” and call it a Church Bank.

“The activities of the Bank by their nature did not differ from the activities of all other banks operating in Russia. The religious dimension in his work was absent, it was run by secular managers,” on Friday a source in the Department for relations between Church and society and the media noted the Agency interlocutor.

He recalled that at the end of 2015 the Bank has removed from its emblem the Christian cross.

ROC never declared that the possession stake in the Bank makes it special compared to other financial-credit institutions, Church institutions and members were not required to use this Bank to store your savings or financial transactions, said the representative of the Synodal Department.

He stressed that “any analogy with religious banking, which exists in a number of Islamic States, against the Bank “Peresvet” inappropriate.”

The representative of the Church called for the investigation of the situation around the Bank and search for the causes of the current situation in it. “We believe that the work of the Bank “Peresvet” should be checked regulatory organizations, which are designed to establish the true cause of the incident and the perpetrators,” the source said.

CBR from 21 October appointed a provisional administration to manage the Bank “Peresvet” for a period of six months in connection with satisfaction of claims of creditors on monetary obligations. For the period of activity of the provisional administration powers of Executive bodies of the Bank suspended. In addition, the Central Bank imposed a moratorium on satisfaction of creditors ‘ claims.

The Russian Orthodox Church controls 49.7 per cent of the Bank “Peresvet”, is 24.4% owned by JSC “Expocentre” (50.8 per cent it owns the Trade-industrial chamber of the Russian Federation), Chairman of the Board and minority shareholder Alexander Shvets – for 12.8% of the Bank Pavel Panasenko OOO “Vnukovo-invest” is 1.7%.

Peresvet in the third quarter of 2016, was ranked the 42nd place in terms of assets in ranking “Interfax-100” prepared “Interfax-TSEA”.