In the Central square of the capital of South Korea Seoul tens of thousands of people came to the rally with a demand to resign the country’s President Park Geun-Hye because of the recent political scandal with his close, reports “Renhap”.

According to the Agency, in a protest attended by representatives of Republican trade unions, student organisations, opposition parties and a number of politicians, which in government circles of South Korea are considered as potential candidates for the next presidential election. Among them the mayor of Seoul Park Won-soon.

The Agency emphasizes that at present the rally is held peacefully, many of the participants came with children. 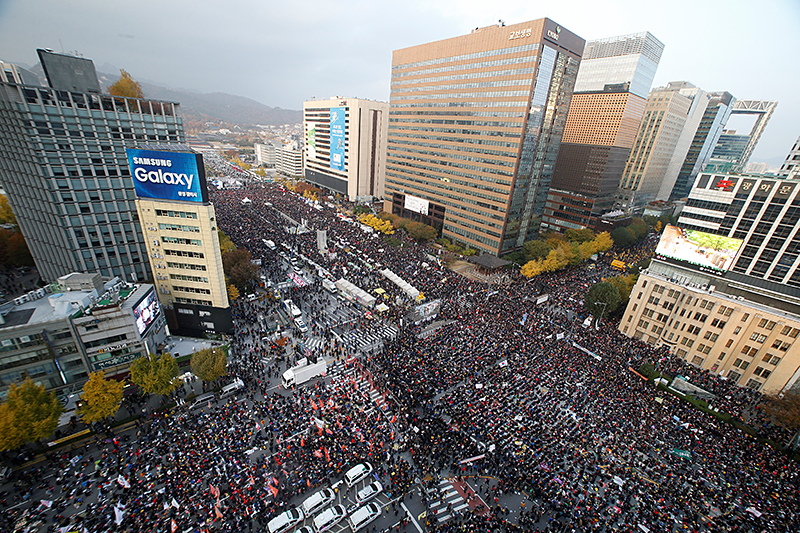 The rally for the resignation of the President in Seoul

The venue of the rally, authorities pulled 25 thousand policemen. The police expects that the participation in the meeting will be about 170 thousand people. The organizers of the demonstration, in turn, referred to the figure of 1 million citizens. If the organizers ‘ forecasts come true, then, says the Agency, the campaign will be the largest since early 2000.

This is the second week of a major rally for the resignation of the President, which takes place in Seoul. The previous one was held on Saturday, 5 November, and gathered, according to official data, 43 thousand people. The organizers said that the rally was 100 thousand people.

The protest comes amid political scandal to the approximation of the incumbent. 3 Nov Seoul district court issued a warrant for the arrest of a close friend of the South Korean leader Choi sung-SIL, which is suspected of using its influence to keep a major South Korean corporations to make major donations to two related Foundation: Mir and K-Sports.

The President suspected that she gave to her friend, who is not a public political figure, secret documents, including copies of its future performances, and were allowed to make corrections with the purpose of influencing the politics and economy of the country.

Park Geun-Hye does not deny the influence of his close. She admitted that she consulted with her in the preparation of speeches, especially at the early stage of his presidency, and made a public apology.

The level of public support for the South Korean leader Park Geun-Hye is at a record low 5%. The Agency notes that the number of dissatisfied activities of its citizens has reached 90%.