A survey on the attitude to traditional media and information obtained from the Internet was held in late October. Sociologists asked Russians about the perception of information from a variety of sources, attitudes to censoring the Internet, banning access to certain sites. The survey was conducted among urban and rural population, it was attended by 1600 people aged 18 years and older in 137 localities of the 48 regions of the country.

The problem for both TV and Internet journalism is that its level is always high as far as necessary for the interests of the public, said journalist and broadcaster Andrei Dobrov. But if the TV works mostly professionals, about the Internet will say this is a fairly young industry, the media, and there is not yet the critical mass of professionals who would be able to hold on to the TV, said Dobrov. 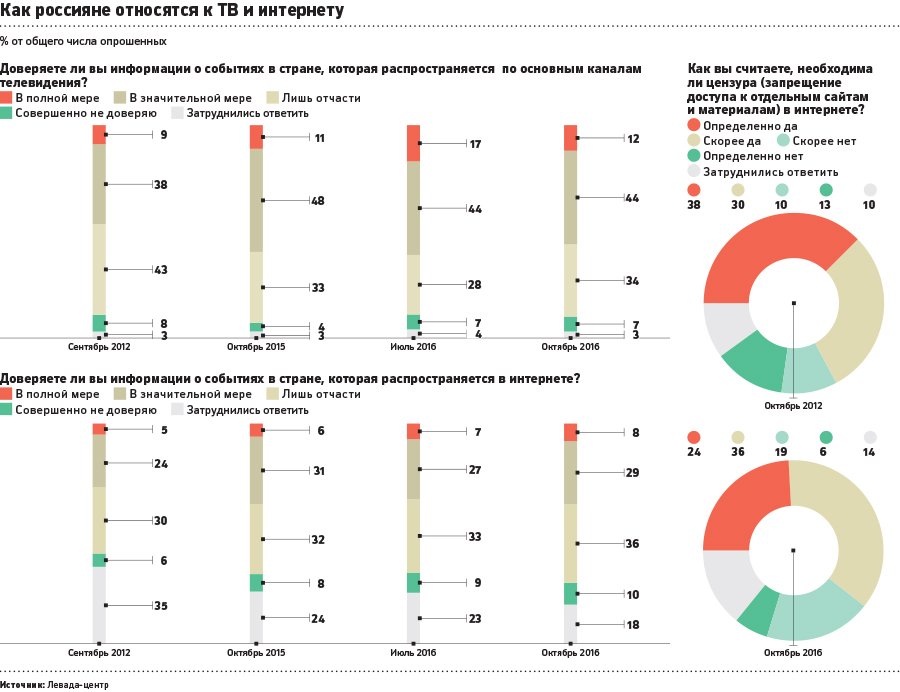 The destruction of the world picture

The trust is reduced not only to television, but also in General to the traditional media: 47% of Russians are often faced with the feeling that television, radio and Newspapers “holding something back”, according to a survey of sociologists. 35% of respondents believe that it is often television, Newspapers and radio give false information about what is happening (a year ago the figure was 42 percent and 31 percent respectively). Traditional media often distract the audience from the really important events, focusing on minor subjects, I believe 44% of respondents a year ago, this was sure a 42% of Russians. However, 39% of Russians believe that in the future the Internet can displace traditional media.

In the trend, which was recorded by sociologists, it is not surprising, said the chief editor and owner of the newspaper “Moskovsky Komsomolets” Pavel Gusev: most traditional media is owned by the state, they are not characterized by the lighting of certain events from different angles, because this to them and reduced the level of trust.

Erosion of faith in state media, said the President of the Center for political technologies Igor Bunin: “the Picture that emerged after 2014 and connected with the Crimean consensus is hard enough, but the periphery begins to deteriorate, the economic crisis kind of foreign policy impasse,” — said Igor Bunin. “It’s a very slow erosion, he said, and it takes a long time to reach the core of the rating of Vladimir Putin.”

The level of confidence returns to the levels that existed before the surge of confidence in the Russian authorities and the Russian media in 2014, said the Deputy Director of the Levada center Alexei Grazhdankin. 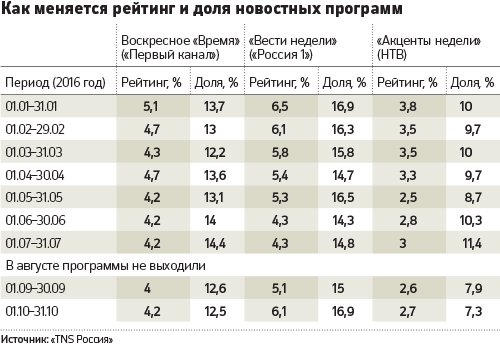 The credibility of information from the Internet among Russians, on the contrary, grows. Network believe 37% of Russians, while in the summer she was inclined to believe 34%. The growth of confidence in the Internet is not evidence of liberalization or conservation society, said the historian and journalist Nikolay Svanidze, need to be adjusted for correctness of answers. In the case of a poll by the Levada center we are talking about a syndrome that appeared during the presidential elections in the United States, explains Svanidze. In Russia, this behavioral phenomenon is called “Zhirinovsky’s syndrome” — people answer truthfully, but not quite what actually is.

Over the past four years the Russians began to speak about the Internet more specifically, identified another trend Alexei Grazhdankin. The number of those who could not say if he trusts information in the Internet, the time was reduced from 35 to 18%, cites Grazhdankin.

According to Bunin, it is important to understand that often people do not trust information of the first television channels, at the same time enjoy the cliche, they hear it, said the President of the Center for political technologies Igor Bunin. “For example, “cunning Clinton” is an example of a cliché Bunin.

Simultaneously with the growth of confidence in the Internet in Russia decreased the number of supporters of Internet censorship, from 68% to 60% over the past four years. At the same time to consider a ban on access to certain web sites an infringement of civil liberties tend about a third of respondents — 32% of respondents.

Svanidze notes: in assessing these results, it is important to note that the respondents understand the censorship — really facing it, the people may not understand that this is censorship.