In the decision of the Ukrainian government said that the preparation for signing of the Association agreement and free trade with the European Union suspended for the sake of strengthening relations with Russia and other CIS countries. The President of Ukraine Viktor Yanukovych said that the country is not abandoning EU integration. In response, the opposition called for the organization of protests, and supporters of European integration began to gather on Independence square in Kiev.

The President of Ukraine Viktor Yanukovych: “Ukraine was and will continue to follow the path of European integration. <…> The more, the more obstacles, but it does not frighten us. We have the confidence and conviction that we are on the right path”

The first rally of protest was held in Kiev. According to the opposition parties “Udar” and “Batkivshchyna” took to the streets from 80 to 150 thousand people. They demanded the resignation of the Prime Minister of Ukraine Mykola Azarov. The leaders of the campaign, among whom were supporters of Yulia Tymoshenko, Yuriy Lutsenko and Vitali Klitschko, as well as Verkhovna Rada Deputy Andrei Chop, called for an indefinite protest. Parubiy headed the headquarters of the camp, the construction of which began in Independence square. We started the first clashes of protesters with soldiers of the detachment of militia “Berkut”.

December 1, 2013. The seizure of administrative buildings in Kiev

The protesters in Kiev seized the House of trade unions, the Kyiv city administration and Kyiv city Council. In the trade unions Building housed the headquarters of the opposition.

In the building of the Kiev city administration pic.twitter.com/wG7hiT1CMB

— oh my gal (@oh_my_gal) December 2, 2013
Viktor Yanukovych publicly opposed the crackdown on the tent camp, which occurred the day before.

The President of Ukraine Viktor Yanukovych: “Those who have not heard the words of the Constitution and the President and his decisions and actions provoked the conflict at Maidan will be punished. <…> I assure you with all responsibility: all efforts of the government aimed at overcoming of crisis processes, strengthening of Ukraine’s economy, improving people’s lives. I encourage each of you to join this responsible task. 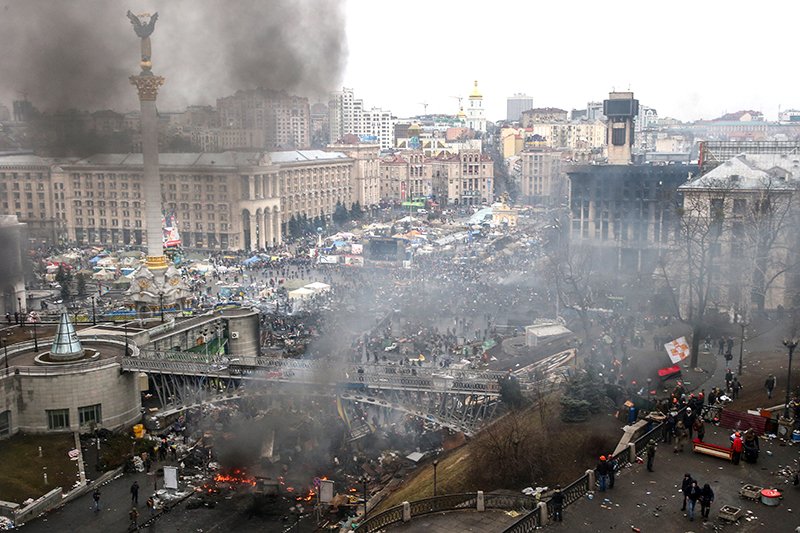 Opposition supporters during riots in the area of Independence square. 20 Feb 2014

February 21, Viktor Yanukovych and opposition leaders signed an agreement “On resolving the political crisis in Ukraine”, which included a return to the Constitution as amended in 2004, the holding of early presidential elections and the formation of a “government of national trust.” But then Yanukovych left Kiev, and on February 28, appeared in Russia, where at a press conference in Rostov-on-don has stated that he considers himself the legitimate President of Ukraine. Since Yanukovych is in Russia.

The correspondent says, was talking about the townspeople were whispering on the sidelines of Parliament and hoped for at the barricades after the revolution

March 16 in the Crimea and Sevastopol held a plebiscite on the future status and nationality of the Peninsula. According to the organizers, more than 95% of the participants voted for joining Russia. March 18, Crimea and Sevastopol became the Russian regions. The referendum was preceded by the appearance on the Peninsula of armed men who have occupied the Parliament and government of the Republic, as well as the airports in Simferopol and Sevastopol. The new Chairman of the Council of Ministers of Crimea is Sergey Aksyonov, the leader at that time, a few Pro-Russian party.

found evidence that “polite gunmen” could be Russian paratroopers

Later, the President of Russia Vladimir Putin admitted that the armed men in Crimea were Russian military. 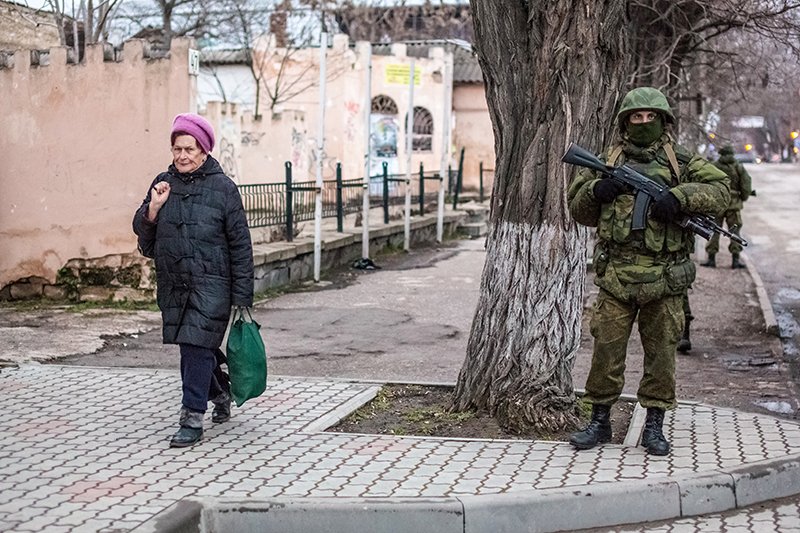 The military on the streets in Simferopol. 28 Feb 2014

March 16, 2014. The introduction of sanctions against Russia

The US imposed the first sanctions against Russia, refusing to recognize the legitimate annexation of Crimea. The next day the sanctions were imposed by the European Union. In the first wave of restrictions hit a few dozen Russian and Ukrainian officials, including Russian Deputy Prime Minister Dmitry Rogozin, deputies of the state Duma Sergei Zheleznyak, Leonid Slutsky and Elena Mizulina, the commander of the Russian black sea fleet Vice Admiral Alexander Vitko, Victor Yanukovych, the Chairman of the Supreme Council of Crimea Vladimir Konstantinov and the Prime Minister of Crimea Sergey Aksenov, the head of Russian Railways Vladimir Yakunin, businessmen Gennady Timchenko, Arkady and Boris Rotenberg. Sanctions also affected the Bank “Russia” and its head Yury Kovalchuk. Dollar Bank accounts were frozen. Personal sanctions against the Russians entered Canada, South Korea, Australia and other countries. Since then sanctions are expanded and regularly renewed.

Despite the exception of “eight”, Russia has retained membership in the “twenty”. However, the first summit after the annexation of Crimea, held in Australia in November 2014 was for the Russian delegation difficult. Foreign media noted the cold tone of foreign leaders when dealing with Vladimir Putin. However, since the atmosphere of international meetings has changed. 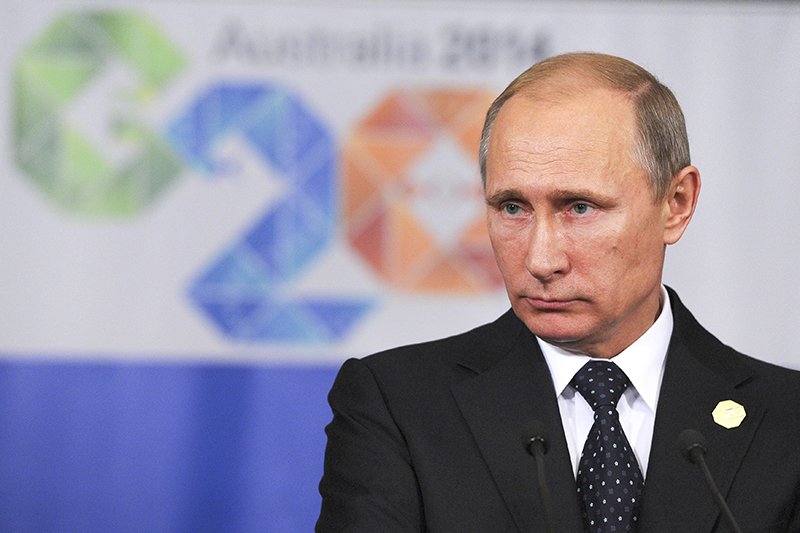 The President of Russia Vladimir Putin at a press-conference on results of the G20 summit. November 16, 2014

5 myths of independence — in a special magazine .

The national security Council of Ukraine published the decision on the beginning of the antiterrorist operation (ATO) in Eastern Ukraine, which involved the armed forces. Since its beginning, according to the UN in June 2016, killing at least 9 470 people, another 21 880 people were injured. According to Kiev, on the side of the militias fighting the Russian military personnel. Russia has consistently denied it. Among the victims were foreigners: in July over the territory of DND was shot down “Boeing” Malaysia Airlines, carrying out flight Amsterdam-Kuala Lumpur. Killed 283 passengers and 15 crew members.

According to the interim results of the investigation of the causes of the disaster, conducted by the international investigation team, the plane was shot down by a missile anti-aircraft complex “Buk”, delivered to Ukraine from Russia.

May 25, 2014. The victory of Peter Poroshenko on elections

At the extraordinary elections of the President of Ukraine defeated independent candidate Petro Poroshenko, who received 54.7% of votes. Also in may, the DNR and LNR held a referendum on independence, after which they declared their sovereignty. 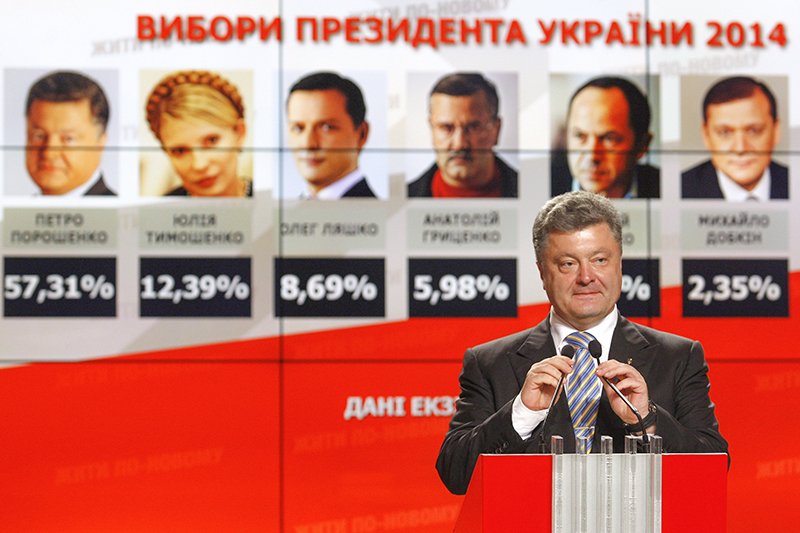 The presidential candidate of Ukraine Petro Poroshenko during a press conference dedicated to preliminary results of early elections of the President of Ukraine. May 26, 2014

6 Aug 2014. The adoption by the Russian food embargo

Moscow imposed restrictions against countries that supported sanctions against Russia. “Certain types” of agricultural products — fruits and vegetables, meat, fish and dairy products from EU countries, USA, Australia, Norway, Canada and other countries were prohibited to import. In April 2015 during his visit to Moscow Prime Minister of Greece Alexis Tsipras, one of the first Western politicians who visited Russia after the annexation of Crimea, has called the sanctions against Russia short-sighted step that leads to a new cold war, and also noted the negative impact of Russian counter-sanctions for the Greek economy. About the dangers of sanctions since then have also said the Prime Minister of Italy Matteo Renzi, Prime Minister of Hungary Viktor Orban.

25 Oct 2015. The victory of the supporters of Poroshenko and “Batkivshchyna” in the local elections

In Ukraine started the election of local authorities, held in two rounds. Most of the deputies in local governments held a “Block of Petro Poroshenko” party and “Fatherland”. The elections showed a decline in the popularity of parties created on the basis of the former “Party of regions” Victor Yanukovych.