Castro declares its purpose in the first interview. The restoration of peace in Cuba — the primary purpose, says the rebel leader on the way to Havana

I just took the first available after winning an exclusive interview with Fidel Castro, commander in chief of land, naval and air forces of Cuba. His victory parade stopped at the war-ravaged second largest city in the Oriente province on the way to Havana.

Castro told me that he was going to get to Havana on Wednesday. He didn’t seem exhausted by three sleepless days and nights, Castro’s mind sharp, his words sound genuinely sincere.

Dressed in overalls khaki, devoid of insignia, Castro says that is not going to usurp any rank above major.

Castro says that he needs to strengthen the military situation on the island. This he does on the way to Havana. In each city along the way — everywhere stormy acclaimed — it makes sure that all weapons were in the hands of the troops of Batista, unreservedly handed over to his troops.

My interview with Castro took place in the headquarters, which is housed in the building technology school on the outskirts of the city.

Castro had just finished an important meeting with several commanders, including major Anibal Castillo and major A. E. Lussana. They face serious challenges — the restoration of peace in Cuba and an end to the bloodshed.

When I arrived, Castro talked with Castillo and Lussana for several hours and were about to continue their journey in Las Tunas. He agreed to speak for ten minutes, which turned into an hour and a half.

Castro told me that he will fully submit to civilian government of interim President Manuel Urrutia. He said that Santiago de Cuba will remain the temporary capital and Urrutia will not live in the presidential Palace in Havana.

When I asked if I move [foreign] diplomats in Santiago, Castro said that it is a task about which he has not yet thought of. He added that the government and command of the armed forces, will remain in Havana.

Castro said that his main mission now is to strengthen peace and prevent further bloodshed. 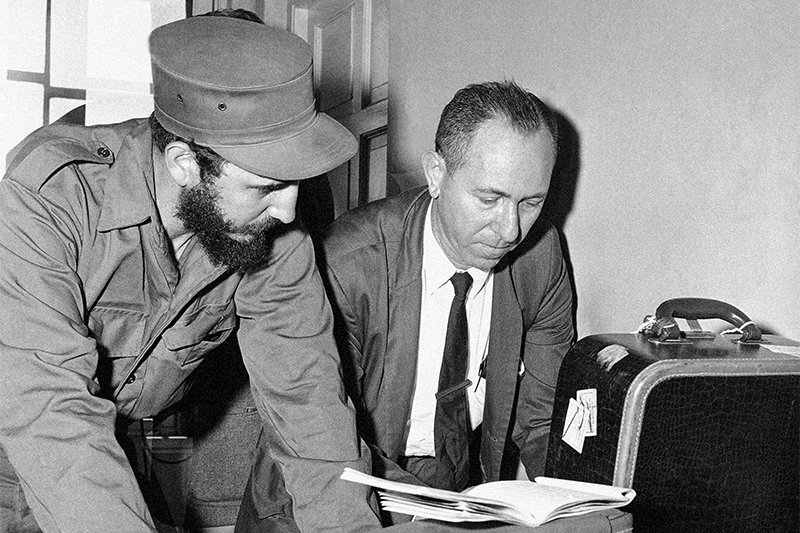 He was distressed by the actions of major-General, Eulochio, Cantillo [Porras] that before the New year, led the revolution to overthrow Batista.

Castro said that Cantillo not only cheated him but also responsible for the chaos that erupted in Havana, and also for the fact that Batista and “other criminals managed to escape”.

“I had a secret meeting with Cantilo 28 Dec, said Castro. — Cantelo flew at a sugar mill here in the East to consult with me. We agreed that the overthrow Batista in three hours of 31 December, without firing a shot. I have these messages from Cantilo”.

“Then, Cantilo returned to Havana. After his return he sent me another message, where he talked about the need to postpone everything for a few days. Then I gave his columns an order of readiness to attack Santiago”.

“The plan never was to be produced by a single shot. I planned it so that to avoid further bloodshed. And then, Cantillo, to my surprise, on the morning of the New year has started a revolution and allowed Batista and everyone else to escape, although he agreed with me that Batista needs to be arrested along with all the others.

I have not had the need in such a transaction, because I have 20 days milled whole army and brought it to unconditional surrender. I’m not kidding. After 20 days, I overcame the whole army.

But not all officers were like, Cantillo. The military captains of the frigates made it and joined us. I was ordered to attack Santiago at seven o’clock, in the new year, if not unconditional surrender, and we finished in Santiago without firing a shot”.

Bribery must come to an end

Castro said that Cuba will be the absolute freedom of the press, bribery and corruption in government will be finished.

I asked him to comment on the charges last year made dictator of the Dominican Republic Rafael Leonidas Trujillo, who said he was selling arms to Batista, because Castro was received from Russian submarines.

Castro replied: “If I had someone to help [weapons], Batista would not last six months. If what I said Trujillo was true, the great American naval base at Guantanamo Bay is not worth a penny, because the Russian would have to provide us right under their noses”.

Castro refused any ties, “July 26 Movement” with the Communists.

Continues the battle with the rebel group. The proposed world rejected. Rebel leader Fidel Castro today did not accept the offer of peace from the new government and ordered his troops to continue the offensive on all fronts.

Tense confrontation between Fidel Castro and Batista, which lasted for two years, ended unexpectedly on Thursday at dawn. The rebellious lawyer, whose powerful silhouette, unshaven face, and cigars constantly appeared on the pages of international publications, won a victory over a stubborn dictatorship “Sergeant”.

In the early hours of the morning the victorious troops of Fidel Castro began to enter the capital, taking the Boulevard of the Presidents… at the same time on the radio it was announced that “the armed forces of the Republic are now under the command of Fidel Castro”, which is a little later in triumph, under the roar of tanks and the roar of applause took the city of Santiago de Cuba.

The quiet Havana triumphant arrival of rebel leader Fidel Castro and provisional President Manuel Urrutia, which will mark the victorious end of the rebellion in which ousted President Fulgencio Batista.

The Catholic Courier Journal, 9 January 1959: Cuba has promised the era of the spirit of Christianity

The victorious revolutionary leader Fidel Castro said that with the overthrow of President Fulgencio Batista of Cuba entering a new era in which the spirit of Christianity will prevail.

Blanco y Negro, January 10, 1959: victory of the Castro — is the fruit of the heroism and tenacity of the rebels

When the government thought he was dead, a source in North America revealed to the world that the leader of the revolution is on the offensive with weapons in their hands.

I asked Castro if she is familiar with the anti-Communist principles Urrutia. He said, “I talked a lot with Urrutia and I know that he adheres to democratic principles”.

Castro emphasized that he will do everything possible that neither one had the impression that he, not Urrutia will be President of Cuba. He insists he will submit to the authority Wrtie and strengthen the successes of the revolution in the post of chief of the armed forces.

He said he doesn’t know how long will take this post as it has “many important and urgent responsibilities that are associated with ordinary people, workers and farmers and improve their lives”. This can be interpreted as a hint about his presidential ambitions, the possibility of elections and the transformation of the “July 26 Movement” in the party.

Castro, in response to another question, said that he has no grievances against US, Americans, “as they are not to blame for the mistakes that were made by diplomats”.

“When you win such a victory, there is no room for resentment, says Castro — I have no offense, which is hard, given that the US bomb that was supposed to come down to Batista, fell to our troops and to our defenseless people.”

“The efforts of Batista and his constant intrigues of the relationship between the U.S. and Cuba has been undermined. I don’t understand how we could be accused of kidnapping the man from Texas companies in Santiago. We detained him for safety reasons, it was not a kidnapping”.

Castro insists that although Americans owning sugar factory or company in Cuba refuse to pay taxes imposed by the government of Castro, their property is not threatened.

“We do not hold any form of retaliation against those who refuse to pay taxes, which we have introduced,” says Castro. “Not only do we respect every piece of American property, but to protect her. I wonder how the American companies who refuse to pay taxes would feel if we asked them to pay such taxes, which were introduced Batista the last two years for the people of this country.”

To the question, what is the position of Castro on the development of relations between Cuba and the United States, he replied that such matters were addressed by the President Urrutia. But he added: “If the US would treat Cuba in a friendly and respectful manner, our attitude to the United States will respect”.