The defence forces of Russia can destroy the Ukrainian missiles if they are launched in areas near the Crimea, where Kiev is going to conduct missile firing. An appropriate warning of the Ministry of defense of Russia published in the notification on the system alerts pilots and aeronautical information NOTAM.

The notice shall specify that the warning of the Russian authorities was received “in response to the Ukrainian NOTAM” on the establishment of exclusion zones in the “zone flight information region Simferopol” and “flight information Odessa”. The Ukrainian warning was issued because of the rocket firing on 1 and 2 December 2016, stated in the notice.

These notifications “response was received from the Ministry of defence of the Russian Federation” is specified in NOTAM. It notes that “in case of detection of rockets launched in the area” they “will be destroyed by air defense forces of the Armed forces of the Russian Federation”. If “missiles will represent a threat to Russian objects”, “will retaliated for the destruction of their means of launch,” says NOTAM. 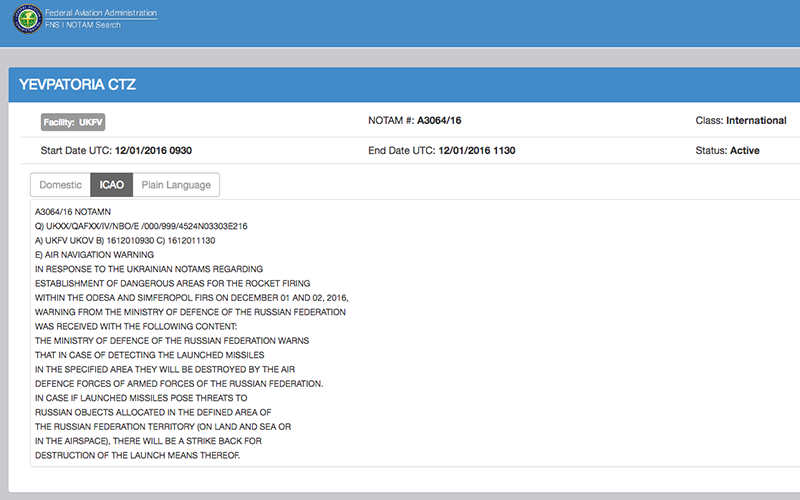 Press Secretary of the President of Russia Dmitry Peskov confirmed to the newspaper “Vedomosti”, which transferred to the Ukrainian authorities note contains the indication that the Russian side will bring down the Ukrainian rocket during the announced by the Ministry of defense of Ukraine firing on 1 and 2 December — in the case that they will present a danger.

Commenting on these reports, Dmitry Peskov, on the morning of 30 November, said that information “should be clarified”. “I, frankly, first time I hear about it,” said he.

That Kiev intends to conduct a missile firing in the airspace of Russia, it became known on November 25. Rosaviatsia reported that the Ukrainian side has issued NOTAM. Only Ukraine has established two danger zones. In particular, on 1 and 2 December was reserved “airspace over the high seas in the area of responsibility of the Russian Federation”. The second zone was established in the same numbers “at all heights” planned “visits” airspace “above the territorial waters of the Russian Federation with maximum depression on the 12 km”. Shooting, as followed from the message of the Russian Federal air transport Agency, was scheduled to be held in the “flight information region Simferopol”.

The defense Ministry on this occasion protested. Kiev declared a “South-Eastern border of the danger zone break limit of the territorial sea of the Russian Federation, which is a violation of international law and Russian legislation,” said the Agency. The Ministry of defence on 24 November was caused by attache of defense at the Embassy of Ukraine.

In Kiev, in turn, called the message of Federal air transport Agency and the Ministry of defense “hysteria” that was “devoid of common sense,” said Secretary of national security Council and defense of Ukraine Oleksandr Turchynov. According to him, the airspace of Russia in the Black sea ends up in the middle of the Kerch Strait. “In this area Ukraine has no plans to conduct missile tests,” — said Turchinov. Later Ukraine has issued a new notice of firing. During firing should be tested anti-aircraft missiles, medium-range, stated on 30 November, the head of the press service of the APU novel Urchila.

Because of reports that Ukraine was preparing a missile firing forces of Antiaircraft defense (air defense) of Russia in the Crimea was transferred to the strengthened mode of service, reported by TASS, citing a source in law enforcement bodies of the region. About the situation regularly report to the President of Russia Vladimir Putin, said Sands 29 Nov. According to him, the situation also engaged in “relevant agencies”.

The source of “Vedomosti”, close to the Russian defense Ministry, said that the attempt “to climb the” forbidden zone in the Russian territorial waters in the Crimea, it seems, is a provocation, and the intent was indeed to shoot on the territory of Russia the Ukrainian military no.