The Board of Directors of the Bank of Russia at the meeting on Friday, December 16, will not change its key interest rate, leaving it at 10% per annum, I think 18 out of 19 analysts polled. However, the Central Bank can soften the tone of the review at the end of the session, giving the market hope of an earlier rate cuts next year, they say.

In 2016, the Bank of Russia reduced the key rate only twice. June 10, the controller brought it down from 11 to 10.5% per annum, and then at the meeting on 16 September reduced it to 10% per annum. The September decision of the Central Bank for the first time accompanied by a pretty stringent review, in which he stressed that to keep the bet level at 10%, you will need at least until the end of 2016.

Only one of the interviewed experts expect that on 16 December, the Central Bank will retreat from its plans. According to the chief analyst of Nordea Bank Olga Lapshina, the Bank of Russia on Friday may still lower its key interest rate to 9.5% due to the effect of three factors. “Annual inflation in December will be closer to 5.5%, which is lower limit of the expectations of the Central Bank by 2016. In addition, the recent strengthening of the ruble and Russia’s economic recovery also may encourage the regulator to lower the rate at the next meeting,” she said. According to the latest data of Rosstat, by 12 December (to the same date in 2015), annual inflation slowed to 5.6%. Since the beginning of the year inflation amounted to 5.2%. The Bank of Russia earlier predicted for the end of 2016 inflation to 5.5–6%. 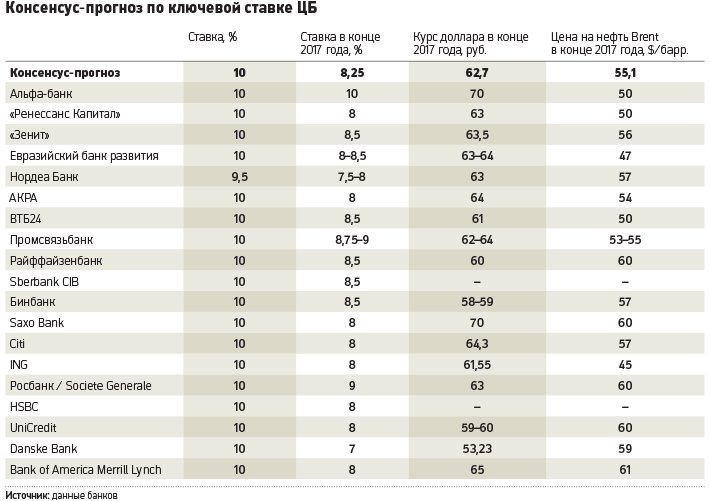 All the other analysts do not expect Friday surprises from the Central Bank and expect the regulator to change the rate will not. According to the chief analyst at VTB24 Stanislav Kleshchev, despite the decline in inflation, the Central Bank is essential to achieve effective impact on market expectations through the implementation of statements of intent, as was done in September, even if it requires to keep its key interest rate any longer than necessary.

Little improvement in inflation since the last meeting did not happen, and if her figures fit the official forecast of the Central Bank, reasons for optimism and early rate cut not, the macro analyst of Raiffeisenbank Stanislav Murashov. Inflation is falling under the influence of temporary factors, and the dynamics of the expectations of the population and business in price growth still remains fragile, reminds Murashov.

But in any case, it remains intriguing regarding the review of the Central Bank following the meeting, says strategist currency markets and interest rates Sberbank Investment Research Mr Zubanov. “In assessing the economic situation of the Central Bank, most likely, will focus on consumer demand,” he calculates. According to Zybunova, despite the fact that in October the retail trade turnover declined more than expected by the market, the Central Bank may be concerned about the fairly strong growth in real wages. “In addition, the regulator may be noted inflationary risks from a potential decline in fiscal discipline ahead of presidential elections 2018,” adds Zybanov.

According to analysts, in the press release, the Central Bank shall be specified the date of the next reduction of the key rate. So, in review return standard phrase that the rate may be reduced “in one of the next meetings,” admits the Manager of research and Analytics PSB Alexander Polyutov. By itself, it has to be considered a softening of the tone controller, he adds.

Chief economist at Eurasian development Bank Yaroslav Lisovolik agrees that the tone of the review, the Central Bank could be mitigated. But it will depend on the reaction of world markets to the decision of the fed on the interest rate, he says. “If it is sharp, then you can expect even stricter tone of the Bank of Russia. But the basic scenario is still a softening of rhetoric as a factor in the fed meeting was supposed to be taken into account by the markets in advance”, — said Lissovolik.

Most analysts polled believe that the next reduction of the key rate will be held in the first and not the second quarter of 2017 (at the meeting in February or March). Inflationary pressures in the first months of 2017 may be weakened due to the increase in oil prices and a concomitant strengthening of the ruble, they explain. Subject to the agreement of OPEC, the growth of the ruble can no longer be regarded as a temporary disinflationary factor, said Zubanov. From the end of November, after the decision of OPEC, Russia and ten more countries outside the cartel to cut production in 2017, oil prices began to rise. So, on Monday, December 12, for the first time since July 21, 2015 a barrel of Brent crude oil has exceeded $57. Against this background, and news about the purchase of shares of “Rosneft” foreign investors began to strengthen the ruble. On Monday, the dollar for the first time in more than a year fell below 61 rubles.

According to the forecast of an analyst of UniCredit Bank Anna Bogdyukevich, at the end of next year, a barrel of Brent oil will rise to$ 60. While the ruble is unlikely to strengthen stronger 59 rubles per dollar, she said. “A more substantial strengthening of the Russian currency will prevent risks of non-fulfillment of the budget and the dynamics of capital flows,” — says Bogdyukevich. At the same ING analyst Dmitry Polevoy believes in expensive oil in 2017, waiting for lower prices of a barrel to $45. “The main risk is the probability that the growth in US production will reduce the impact of OPEC deals to the rebalancing of the oil market and prices may fall,” says Field. The dollar thereupon rises above 61 rubles per dollar, he adds.

By the end of 2017 the key interest rate could drop to 8-8,5%, agree most analysts. “A fairly high level due to repeated statements of the Bank of Russia is that the equilibrium real interest rate should be 2.5–3%, while in the transition period, when inflation expectations remain high and “not anchored”, it is necessary to maintain a higher level of interest rates,” said Zubanov.

Speaking in the Duma on 2 December, the head of the Central Bank Elvira Nabiullina declared that the regulator does not intend to reduce the key rate “now and quickly”. Low interest rates in the current environment can lead to higher investment in dollar-denominated assets and, as a consequence, the devaluation of the ruble, warned her. Therefore, the Central Bank will continue to generate positive interest rates in the economy, said Nabiullina. In addition, after the bet a definite level, the Central Bank can reduce the step changes from 0.5 to 0.25 p. p. for greater freedom of response to proinflationary factors, says the head of analytical Department of Bank “Zenith” Vladimir Evstifeev.

In this case the chief economist at Alfa Bank Natalia Orlova do not expect lower interest rates in 2017. “Lump sum payment to pensioners in January 2017 and the regular indexation of pensions since February of 2017 can bring annual inflation to 6% by the summer of 2017” — does not preclude it. In the second half of 2017, she predicts the development of events in two scenarios. If the price of oil will rise, along with them will increase and spending budget that will create inflation risks, says Orlov. If oil prices fall, then the reserve Fund will begin to spend money faster is will necessitate borrowing in the domestic market that prostimulirujte rate hike, she said. “Thus, we believe that constant rate is a more probable scenario by the end of 2017 than our previous forecast of its decrease to 8%,” — concludes Orlov.