Friday, 16 December, ended the visit of the Russian President to Japan, held after an 11-year break. According to the results of the signed agreement on economic cooperation, scheduled facilitation of the visa regime and joint economic activities on the Kuril Islands. The volume of Japanese investment is estimated at $2.54 billion to solving the territorial problems discussed a lot, but in the public space and nothing new was said.

The shadow of the peace Treaty

On the conclusion of a peace Treaty, the leaders, according to Japanese Prime Minister Shinzo Abe, spoke five hours, including nearly an hour and a half from eye to eye. The situation with the absence of a Treaty, he calls crazy. “I believe his innocence, surely Vladimir. But the insistence on righteousness and justice, this problem can not be solved”, — said the Japanese Prime Minister.

“You need to stop the historical ping-pong on these territories”, — agreed Vladimir Putin noted that this issue could be resolved “overnight”.

The President of Russia believes that the contract must be between countries create an atmosphere of trust. Contributions should contribute to the deepening of economic relations.

At a press conference the Russian President also mentioned that you should take into account the position of the United States. He recalled that in 1956, when the Soviet Union and Russia came close to solving the territorial issue, the United States opposed, threatening to completely take control of Japanese Okinawa. According to Putin, Russia near Vladivostok “two large naval bases, our ships ocean zone out in the Pacific ocean, we need to understand what will happen in this area.” “We want our Japanese colleagues and friends to take into account all these details and all the concerns of the Russian side,” urged Putin.

On 14 December, the Asahi newspaper, citing a source in the Japanese government wrote that Japan allows the deployment of us bases in the South Kuril Islands, if the Islands will be transferred to Tokyo. According to the interlocutor of the edition, during a meeting in Moscow on the question of the Secretary of security Council of Russia Nikolai Patrushev on whether hosted US military bases in the Kuril Islands if they go to Japan, the Secretary-General of the security Council of Japan, Shotaro Yachi said that “such an opportunity”. The Kremlin this information is not commented.

According to a researcher of the Tokyo Foundation and expert of the Valdai club, Taisuke Abiru, Washington does not intend to prevent the deepening of Russian-Japanese relations. The only thing that can guard US, as is the prospect of a weakening us-Japan Alliance in light of Abe’s desire to develop bilateral relations with Moscow. Therefore, according to Abiru, Washington will closely watch the development of events.

The US is interested in maintaining the territorial dispute over the Kuril Islands, said the head of the Center for Japanese studies, Institute of Far Eastern studies Valery Kistanov: “on the one hand, it makes more manageable the main ally of America in Asia, and with another — weaken Moscow’s positions in the region.” Ultimately, he said, relations between Russia and Japan depend on U.S.-Russian and U.S.-Japanese relations.

The analyst from Tokyo University Nobuo Hosa Simotomai, in contrast, believes that since the cold war, Washington supports in principle the problem of the Kuril Islands. This was especially evident during the administration of bill Clinton, when Moscow and Tokyo signed a number of agreements in principle.

Japan signed several dozen agreements; the total investment from the Japanese side was about $2.54 billion at the current exchange rate, with reference to the Deputy Secretary-General of the Cabinet of Ministers of Japan Kotaro Legs gave the Agency “Kyodo”.

Japan Bank for international cooperation (JBIC) has signed an agreement with “Yamal LNG” on opening a credit line amounting to €200 million in project Finance for a total of $19 billion, including credit funds of Russian and Chinese banks and the Russian national welfare Fund, told TASS.

Chairman of the Board of Directors of Russian pharmaceuticals group of companies “R-Pharm” Alexey Repik, answering the question TASS, said that with the Japanese Corporation Mitsui (“Mitsui”) agreed to sell her 10% of the company.

Many of the agreements are memorandums of understanding, told Reuters the Japanese official involved in the preparation of the summit. The Japanese company, despite strong pressure from the government, wary of the risks associated with the work in Russia, he explained.

On Thursday, Prime Minister of Japan Shinzo Abe and Vladimir Putin also expressed readiness to establish a joint economic activities on disputable Islands. The proposal is not new — to study this issue, Russia and Japan agreed in 1998 and 2003, the results of those intentions are not brought. Moscow believes that this activity should be conducted according to Russian laws, as the Islands — Russian territory, said on December 15, Russian presidential aide Yuri Ushakov.

From the point of view of the foreign Ministry of Japan, any of the economic activities of Japanese citizens and residents in the South Kuril Islands is the de facto recognition of Russian sovereignty over the Islands, reminiscent of the head of the Japan IMEMO Vitaly Shvydko. This contradiction, the expert continues, still not resolved. In particular, Japanese fishermen have the right to fish in the waters near the Islands (according to quotas), but land-based activities Tokyo absolutely do not approve.

The commercial potential of the small Islands. “Talk about presence on the South Kuril Islands minerals was carried out patriots. I am not aware that any company has seriously considered the opportunity to begin exploration or production on the Islands,” — said in a conversation with senior researcher of the research Center Japan Institute for Far Eastern studies Oleg Kazakov.

The issue of joint economic activity should be elaborated by experts of the two countries. Abe proposed to create a separate structure for this purpose, to conclude an intergovernmental agreement, establish a mechanism for cooperation, said at the final press conference Putin. “The only real way to overcome the legal hurdles to take in Russia, and in Japan with special laws that will allow to work not on the basis of common law and pursuant to these special acts, explains Shvydko from IMEMO. In any case, from negotiations to transition to action will be at best a few years.”

The meeting between Putin and Abe were not diplomatic breakthrough, but showed that the parties are ready for serious dialogue and there is “some indication that reaching agreement is possible”, sure however. 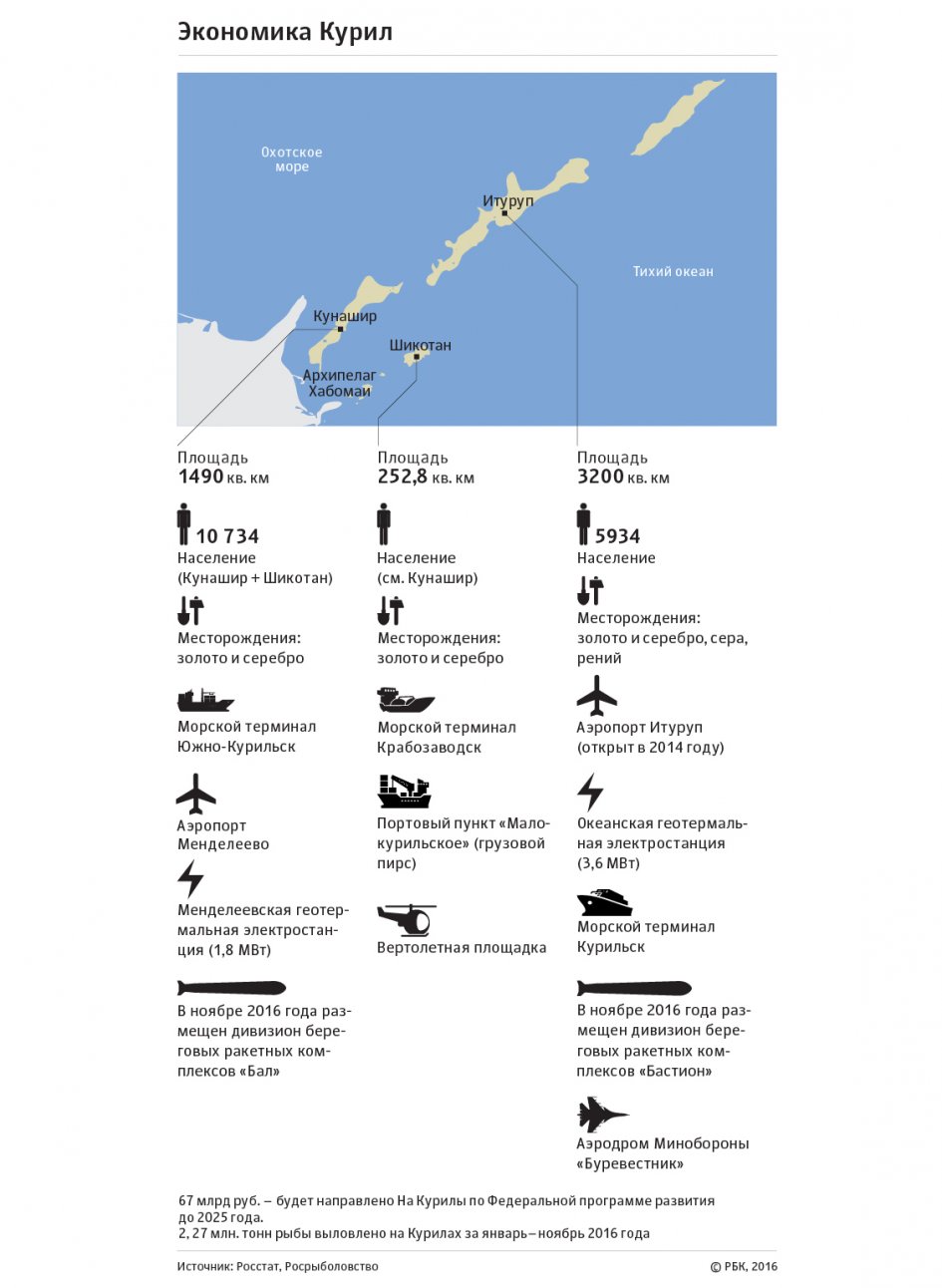 The Russian leader also said that the ministries of foreign Affairs is mandated to discuss how you would facilitate citizens visiting Japan the graves of relatives on the South Kuril Islands and to open access to currently closed areas.

After moving Islands of Russia left them 17 thousand people, reminds Reuters. Since April 1992 implemented a mutual visa-free travel of residents of the South Kuril Islands to Japan and Japanese citizens on the island. The visits are made without visas in the presence of travel documents.

To visit the Islands, Japanese citizens can only in the group, said the officer of the consular Department of the foreign Ministry. The relief mode can include the creation of additional temporary checkpoints, said in a statement following the visit.

The President of Russia also has charged to work a question on free movement between Sakhalin and Hokkaido. “About the specific mechanisms and the timing of the introduction of free mode while to speak prematurely” — said the official representative of the foreign Ministry Maria Zakharova.

Japan also announced a simplification of visa regime for some categories of Russians. Multiple entry visa for a short stay in Japan from the beginning of 2017 will be able to get businessmen, scientists and cultural figures. The validity of these visas has been extended from three to five years. In addition, when applying for short term visas to Russians no longer required letter from the guarantor if the trip is funded independently by them.