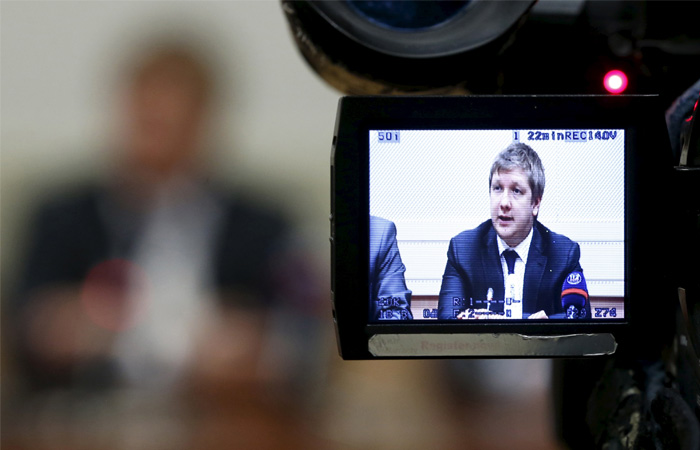 Moscow. 14 Dec. The head of Board NAK “Naftogaz Ukraine” Andriy KOBOLEV stated that if you lose in arbitration to “Gazprom” under the contract of purchase and sale of gas the sum of $38 billion, which the Russian company requires the condition of “take or pay”, will be unaffordable for “Naftogaz of Ukraine”.

At the same time, commenting on the situation in the air “24 channel”, KOBOLEV said that the government of Ukraine is not a guarantor of a commercial dispute between the NJSC and Gazprom as legal entities.

At the same time, he noted that optimistic in terms of a decision by the Tribunal in favour of NAC.

KOBOLEV previously reported that the cost of Ukraine’s GTS will be reduced to five times in case of full termination of transit of Russian gas to Europe. According to him, the implementation of such a scenario is possible in the case of the construction of the “Nord stream-2” and two branches of the “Turkish stream.” At this moment he estimated the cost of the gas transportation system (GTS) of the country of $30 billion.

“Naftogaz Ukraine” in transit claim requires transfer any of its rights and obligations under the transit contract “Ukrtransgaz” as the operator of the gas transportation system of the country in accordance with the requirements of the Third energy package, as well as to change the method of calculating the transit tariff in compliance with European standards and regulations energy and Antimonopoly legislation of Ukraine and the EU.

In August 2016, “Gazprom” reported that the revised amount of claims of “Naftogaz” amounted to over $14.23 billion – these requirements relate to a dispute over the contract of sale. Under the transit contract, Ukraine demands from the Russian Federation another $8.2 billion.

The Russian Corporation also filed a lawsuit in the Arbitration Institute of the Stockholm chamber of Commerce to “Naftogaz” – for unpaid gas. Due to requirements under the “take or pay” the amount of the claim was increased to $31,75 billion In”Naftogaz” does not exclude that the total amount of claims “Gazprom” contained in the contracts in 2009 and challenged in court the principle of “take or pay” up to 2020 could reach $60 billion.

Russia has already stated that it considers inappropriate withdrawal of the principle of “take or pay” gas contract with Ukraine to the Stockholm court of arbitration.