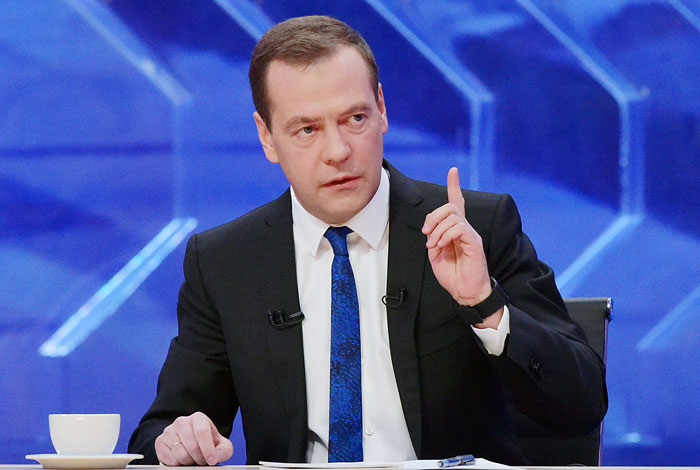 Moscow. 15 Dec. Prime Minister Dmitry Medvedev once again has summed up year in interview to the Russian TV channels. The discussions were attended by representatives of three Federal channels – the First, RTR, NTV, and RBC also invited “the Rain”. The main focus of the speech of the head of the Russian government are as follows.

Retired 43 million pensioners in the budget planned 7 trillion rubles. The following year it was decided to index pensions in the usual way, by more than 5%, ie more than inflation for the current year. All social spending is a priority of government, and Medvedev promised their full payment.

In 2017, the growth rates will not exceed the rate of inflation, i.e. 4%. The government sees the problems in housing and knows how to solve them. Energy efficiency is a concern for power distribution companies, not the state, but it will think how to help them: for example, subtract inflation at 3-4%.

By the end of the year we expect a decline in GDP of about 0.5%. Medvedev promises to catch up and overtake, “to grow more than the entire world.”

– “Detroit we don’t need”. The government continue to support automakers in the car industry in 2017 will allocate 62 billion rubles.

Food market grew by 3%, due to Russian counter-sanctions. The Prime Minister set the bar at 100% to achieve food security in the coming years.

Now low inflation, but rising prices, Medvedev did not refute, considering that he slowed down.

– Progressive tax scale in the coming years will not. The tax base of personal income tax increases – so the citizens agree with the existing flat rate. The Prime Minister himself – for the flat rate.

– With the rate of income tax while it is not clear.

– The health budget has increased: there are perinatal centers, frequent high-tech operations.

– What is an unprecedented increase in defense spending? It’s border security, the country’s defense, state defense order (jobs for workers), the growth of GDP.

– Russia receives from arms sales to the $17 billion the country to meet and support the demand for weapons.

– “Bashneft” was sold to “Rosneft”, because it suggested for Bashneft best price. A 19.5% stake in Rosneft sold it to Glencore and the Qatar Foundation, because they were willing to pay right now; the amount of the transaction amounted to approximately 10.5 billion euros.

– Decrease in selling prices 19.5% stake in Rosneft compared to the amount specified in the Directive of the government from November this year, due to the reduction of market quotations.

– The situation with Ulyukaev is a sad event that is beyond the understanding of the Prime Minister.

– An investigation is underway against the officials of the investigating authorities opened 500 cases for investigators and prosecutors.

– “The Show must not go on” – is echoed by Medvedev regarding the fact that the investigation should not turn into a show.

About sport and doping

– Medvedev demands to give a legally perfect definition of doping.

– The decision not to allow Paralympian to the Games was immoral.

To say that in Russia there is a state programme of doping – it’s funny, it’s not true, said the Prime Minister.

– The pros and the tramp, Rex Tillerson (who trump was going to appoint Secretary of state and who previously received Russia’s Order of Friendship) and Elon musk are in their pragmatic thinking and lack of innate anti-Russian stereotypes.