In Minsk on Wednesday, December 21, the last meeting of the contact group on Ukraine.

The participants agreed on the introduction of the “regime of silence” in the Donbass from midnight on 24 December, Kyiv time on New year and Christmas, said the special representative of the OSCE chair Martin Sajdik. Had also formed the plan of work in 2017, said to journalists the Ambassador of Russia at the talks in Minsk, Boris Gryzlov.

The parties managed to agree on the issue of exchange of prisoners. “At the moment, is actively working with lists exchanged”, — wrote in Facebook Victoria Talakin, press Secretary of the Plenipotentiary representative of the self-proclaimed Donetsk national Republic (DND) Denis Pushilin.

At the previous meeting in Minsk on 7 December, the Ukrainian side expressed readiness until the New year to organize an exchange of its troops in 42 228 troops of the self-proclaimed DND and LNR.

However, the negotiators stated that none of the political points of the Minsk agreements in 2016 failed to run. During the year the Verkhovna Rada adopted the law on Amnesty for participants of the conflict in the East, not change the Constitution, as required by the Minsk agreement. Not been agreed in the law on elections in the breakaway territories of Donetsk and Lugansk republics.

Head close to the Kremlin Center for political conjuncture Alexei Chesnakov believes that the quality promotion of the Minsk agreements is possible only under the condition that the Ukrainian side will make the real political action towards the Donbass.

“The potential of reciprocal steps on the part of republics has long been exhausted. Will not be political decisions in Kiev — there will be a peaceful settlement,” — said Chesnakov . He also noted that the fighting in the region “certainly” reduce the chances of developing a political compromise.

Ukrainian military on Wednesday took a new position in the area of Debaltsevo, said the Secretary of national security Council and defense Oleksandr Turchynov. New positions, he said, gave the military “an additional advantage over the enemy in this sector of the defense.” On Wednesday afternoon the fighting was in the vicinity of debaltseve, the fall of shells in the city were recorded, reported “RIA Novosti” in the local administration.

The aggravation of fighting in the area Debaltsevo, Svetlodarsk on the so-called bulge, began on Sunday, December 18. Svetlodarsk arc covers the sector of the front near debaltseve, Uglegorsk and Kalinovka. Responsibility of the parties to the conflict are traditionally laid on top of each other. According to the people’s militia self-proclaimed Luhansk national Republic, Ukrainian security forces tried to break through the defensive line, what triggered the collision. The Ukrainian side denies it. The aggravation of the situation, the official representative of the Ministry of defense of Ukraine Andriy Lysenko on Sunday due to the fact that the enemy carried out a massive artillery preparation for the attack of two strong points of the Ukrainian army in Lugansk region, located just North of debaltseve.

Sunday killed four militia, said the militia self-proclaimed LNR. From the Ukrainian side killed at least eight military. About the deaths of five soldiers of the defense Ministry of Ukraine reported on 19 December, one died the next day. On the death of two Lysenko said on Wednesday. Another Ukrainian soldier was captured during the fighting on the arc Svetlodarsk 18 Dec. 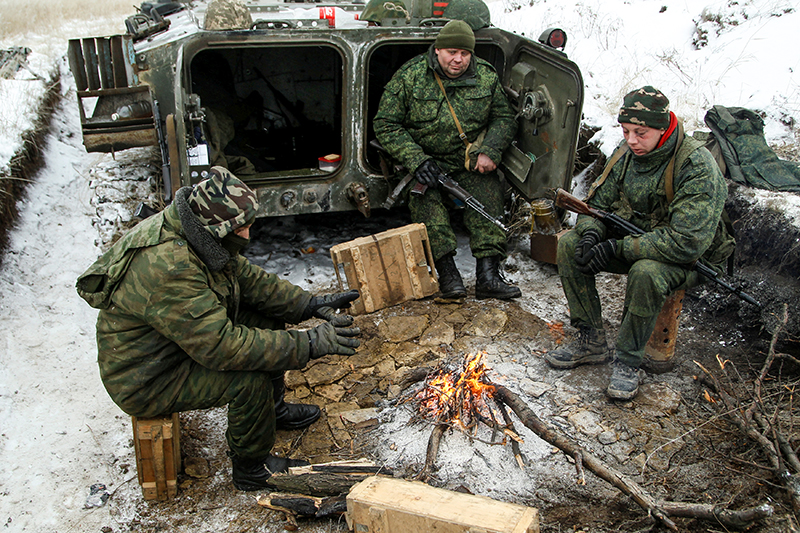 Soldiers of the Lugansk people’s Republic on the arc Svetlodarsk. 19 Dec 2016

In the Donbas in recent days do not stop fighting in many areas, said the former Minister of defence DND Igor Strelkov (Girkin). According to him, there is an exchange of artillery strikes Mariupol and on the outskirts of Donetsk, was also an attempt to break the Ukrainian forces on the arc Svetlodarsk 18-20 Dec. Fighting for this territory led the 54th mechanized brigade of the armed forces, which managed to oust the division of the second corps of the national police LNR. Both sides — Mat and LDNR officially denied that the initiative for the offensive under Debaltsevo belonged to them.

Strelkov believes what is happening in the arc Svetlodarsk of “intensive reconnaissance” of the Ukrainian military. He said that fierce fighting around the strong point of “height-220” (a disputed territory is about 1 square km), Ukrainian forces initially took the strong points of “fright”, “Star” and “Cross”.

During the fighting, use prohibited weapons Minsk agreement. The representative of the operational command of the self-proclaimed Donetsk national Republic Eduard Bacurin reported use of the Ukrainian party of artillery shells calibre 122 mm and 152 Intelligence DNI, in his words, saw the strengthening of the positions of Ukrainian security forces near the contact line heavy weapons, including tanks and howitzers. In accordance with the Minsk agreements, guns with caliber over 100 mm should be set aside.

The current aggravation is the bloodiest since June 2015, said at a briefing in Washington, state Department spokesman John Kirby. “What is happening can be compared to the level of the summer fighting for the same height. Without a command from Kiev such an attack could not be, — said the Shooters . It was the probing and reconnaissance, an attempt to improve the position and to see the reaction of the military forces of the LC and DNR — whether to fight, not flee.”

The escalation of tensions recorded and the specialists of the Special monitoring mission of the OSCE. From 18 to 19 December was 2900 explosions, the next night 1000, the majority of violations of ceasefire regime were recorded in the areas around Svetlodarsk, Gorlovka and Debaltsevo, said in the report of the mission on December 20.

The problem debaltseve and political pressure

Debaltseve came under the control of the self-proclaimed DND in February 2015 during the bloody fighting, during which the Ukrainian military were in the “pot”. In those days, was concluded the Minsk agreement. However, the President of Ukraine Petro Poroshenko and his representatives insist that the settlement should be placed under the control of Ukraine. “Under the Memorandum of 19 September (the date of the conclusion of the Minsk agreements in 2014. — ) on 12 February (the date of the conclusion of the representatives of the countries “Norman Quartet” in Minsk of the “package of measures to implement the Minsk agreements” in 2015. — ) this territory was controlled by Ukrainian military”, — he said after the meeting “channel four” in Berlin in October this year. The militia said that they do not intend to leave. “Given that the Ukrainian side will play up the theme of the return of debaltseve in the Minsk negotiations, it is possible that Kiev was trying to reinforce requirements through diplomatic channels, sliding the positions of the militia” — suggests the Shooters.

This is another violation of the Minsk agreements, but the escalation is limited, as the Ukrainian side does not want to cause large-scale response indicates Russian military expert Viktor murakhovski. Its aim is to maintain the mobilization of the mood in the country, suggests the specialist.

Political factors explains the aggravation of the Ukrainian political analyst Vadim Karasev. According to him, Kiev is signaling US about the persistent problem in the Donbass, as in recent years, Ukraine has gone from the American agenda. The DNI and the LC, according to Karasev, it is also beneficial to show that a freezing of the conflict will not.