Message from the President of the USSR to the people, who have all been waiting for started at 19 PM Moscow time and was shown live on the Central TV.

“Dear compatriots! Fellow citizens! Due to the current situation
education of the Commonwealth of Independent States, I cease
activity on a post of the President of the USSR. Take this decision
a matter of principle”, — said Gorbachev.

He stated that he supports the independence of Nations and for
the sovereignty of the republics, but it is believed that it is necessary to keep the Federal government.

“Events took a different path. The prevailing line on the dismemberment of the country and separation of state, with which I cannot agree. And after the Alma-ATA meeting and the decisions made my position on this matter has not changed. Moreover, I am convinced that decisions of such scale would have to be based on people’s will. However, I will do everything in my possibilities to make agreements that are signed there, have led to real accord in the society, facilitate exit from the crisis and the reform process”. The Appeal Of Mikhail Gorbachev. 25 Dec 1991

In his address, Gorbachev tried to summarize the path that the country has gone under his leadership since 1985. He noted the following points.

The transfer of the nuclear button

Immediately after the televised address, Gorbachev signed the decree about resignation of the Supreme commander of the Soviet Union and gave the right to the use of nuclear weapons to Russian President Boris Yeltsin.

Passed formally because Yeltsin himself to this ceremony was not. “I was told that the Russian President is dissatisfied with my performance, is outraged and refuses to come, as we agreed, at the appointed time. Offers to meet “in a neutral place,” wrote Gorbachev in his memoirs.

Immediately after this, the technical procedure for the transfer of the nuclear suitcase was the Minister of defense of the Soviet Union Yevgeny Shaposhnikov, who will perform the duties of the Supreme commander until December 30, 1991, when Minsk will host the next meeting of the heads of States of the CIS.

“Any other procedures wires of the President of the Union, as is customary in
civilized countries, was not. No President of a sovereign
of the States of the former Soviet republics, although most of them I was bound many years of close and friendly relations, has not found it possible not only to arrive on these days in Moscow, but didn’t call me.” Mikhail Gorbachev, “December 91”

Russia in the UN

25 day of December, Russia ceased to be socialist — the Parliament of the Republic decided that the official name becomes Russia (Russian Federation). The abbreviation RSFSR gone. before the vote, the head of the Supreme Council Ruslan Khasbulatov said that the appropriate changes should be made to the Constitution of the Republic, but offered to do it later.

On the same day the Soviet Union ceased to be a member of the UN, yielding its place to Russia. Ambassador to the UN, Yuli Vorontsov, gave the representative of the Secretary-General of the organization message from the President of Russia Boris Yeltsin, which stated that “the membership of the Soviet Union continues now the Russian Federation,” and that instead of the name “Soviet Union” should now use the phrase “the Russian Federation”.

One of the main issues in the relations with the UN was the size of the contributions which every year must pay the participating countries of the organization. The parties agreed that this issue can be revisited in the summer when it will be clear what will be the economic situation in the country.

At 19:38 Moscow time, an event occurred that is considered to be the end of the 79-year history of the Soviet Union. After just a few minutes after the treatment of Gorbachev from the flagpole over the Kremlin was lowered a red Soviet flag, and his place was taken by the Russian tricolor. 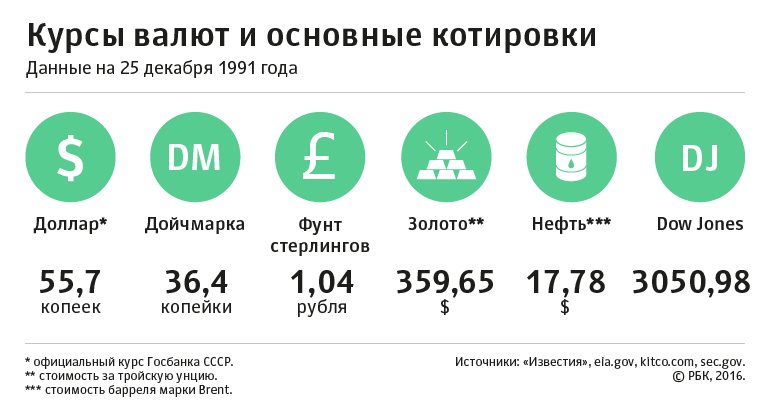