By 26 December 1991, the Soviet Union, in fact, existed only on paper. President Mikhail Gorbachev resigned and handed control of the “nuclear button” to Russian leader Boris Yeltsin. Part of the new Commonwealth of Independent States (CIS) includes 11 of the 15 former Soviet republics except Georgia and the Baltic countries. The Soviet Union de facto ceased to exist, the decision had to register it legally.

The latest ruling in the history of the Soviet Parliament had to take in a truncated composition: of the two chambers of the quorum is preserved only at the top — the Council of republics under the chairmanship Anuarbek Alimzhanov. 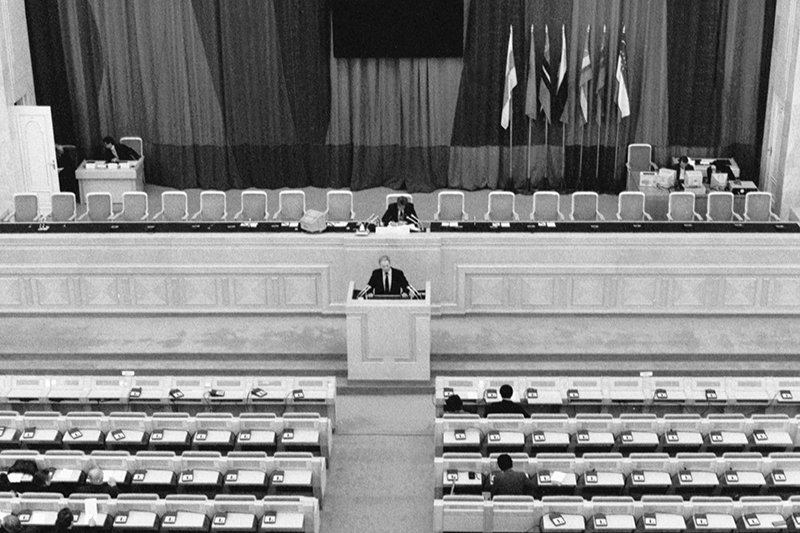 The last meeting of the Council of Republics of the Supreme Soviet, which adopted a Declaration on the dissolution of the Soviet Union Photo: Kuzmin Valentyn/Fotokhronika TASS

“Dear people’s deputies! As you can see, today the flag of the Soviet Union over the Kremlin launched. And last night you were all witnesses of how the President is the first President of this great country — resigned.

Don’t know how was held the first session of the Supreme Soviet of the USSR and what was the condition of the people, but it seems to me, then talked about great things: world revolution, social equality, socialism, the dream of going to communism. There’s probably been said a lot of good, kind, wonderful words about the future of this vast country.

However, it so happened that today I was a participant of the last meeting of the last session. And what was dreamed, what was discussed at the first session, frankly, not true. Apparently, it said that, building socialism, we are walking through a whole historical epoch. Alas, it turned out that in history to transcend the era it is impossible.” From the transcript of the speech Anuarbek Alimzhanov at the last session of the Supreme Soviet of the USSR.

The Council of the republics to this point remained to work only five delegations. However, at the last meeting was attended by representatives of the republics, which ceased to participate in the work of the Federal Parliament, including Russia, Belarus and Kazakhstan. 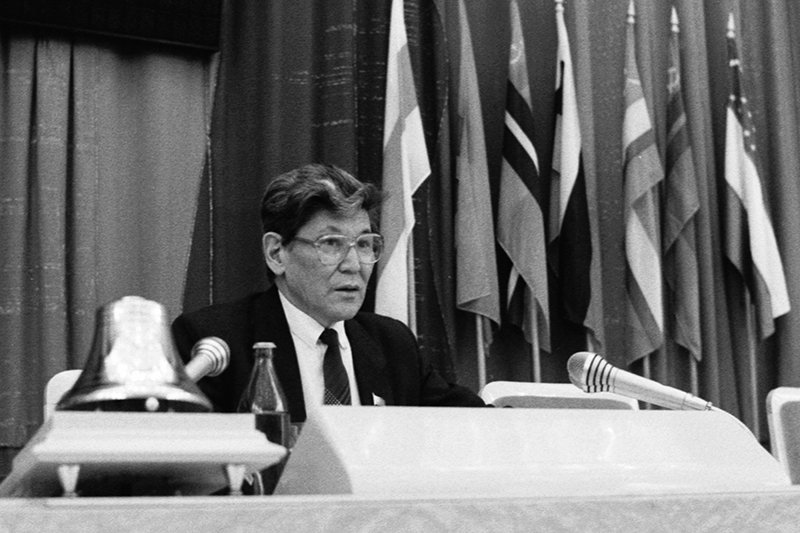 Chairman of the Board Anuarbek Alimzhanov during a speech at the meeting, which adopted a Declaration on the dissolution of the USSR

The Chairman suggested to consider what the quorum is, and then there was the voting and Declaration № 142-N, entitled “In connection with the establishment of the Commonwealth of Independent States” was adopted.

In the text there were several errors — the agreement on creation of the CIS was ratified in Russia, Uzbekistan and Kyrgyzstan.

However, to influence the legitimacy of the adopted document it is not, could the Federal Parliament just needed to accept the document, to formally terminate its existence.

Interestingly, this Declaration was not the last in the history of the Supreme Council. A little later, the deputies adopted the decision to release from their positions of judges of the Supreme court and the Supreme arbitration court of the USSR, as well as members of the Board of the Federal Prosecutor’s office. Their posts were abolished from January 2, 1992, and employees relied severance pay in the amount of three months salary. The story of the last remaining authority in the USSR was discontinued. 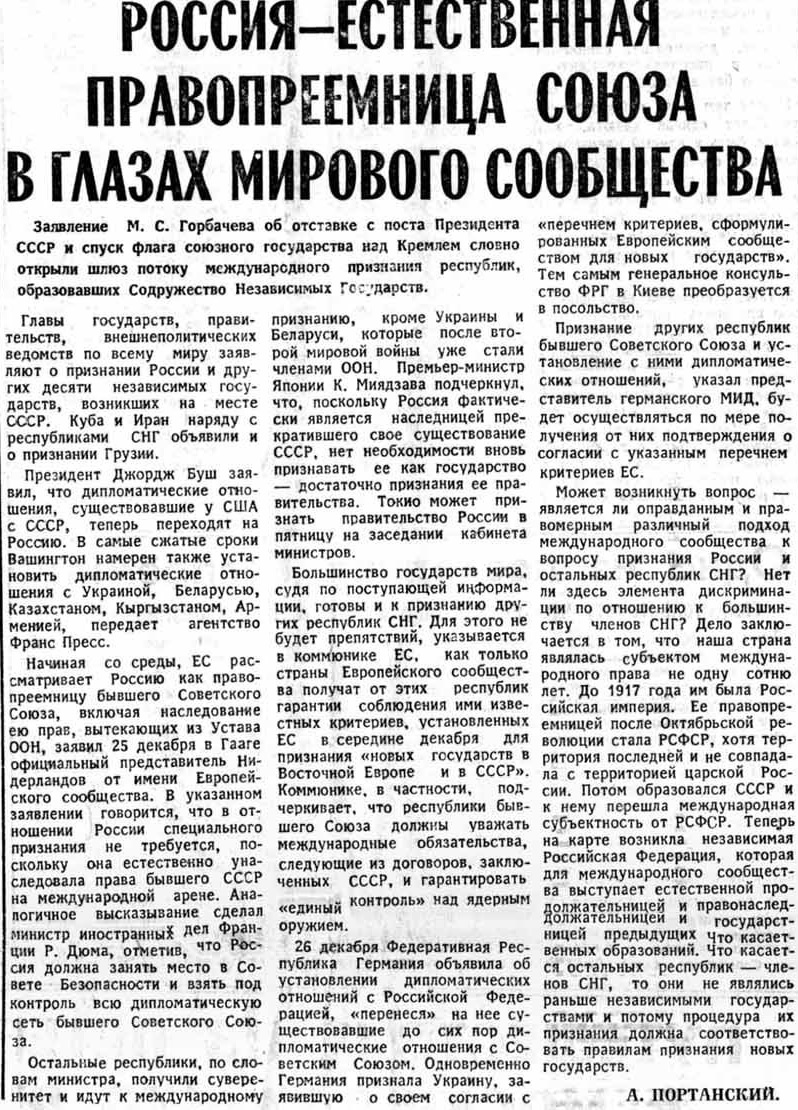 An article in the newspaper “Izvestiya” dated December 26, 1991

Gorbachev’s meeting with the journalists

Already in the status of a retired politician, Mikhail Gorbachev met with reporters. The meeting was held in the hotel “Oktyabrskaya” and lasted two hours. The former Soviet President spoke on the same themes that the last month: responsibility of politicians, on the need to continue reforms and that the Union needed to be saved.

“I was against it and now against it, to go with the scissors on the map of our country, in this huge community. To reallocate the powers, authorities, rights, Yes, but not to disperse. And from the point of view of specific tasks, tactical tasks in the field of Economics, social policy, Finance, believed that the Federal government with efficient mechanisms more necessary and justified than something strange. But the duty of every patriot is to help what has become a real process. Let it be the steps to agreement. It is necessary to choose, thinking about people, about life — real, today.” Mikhail Gorbachev at the meeting with journalists on 26 December 1991.

Most of the world politicians carried out Gorbachev’s warm words, saying that he managed to change the course of history, and his achievements at the head of the Soviet Union was revolutionary. 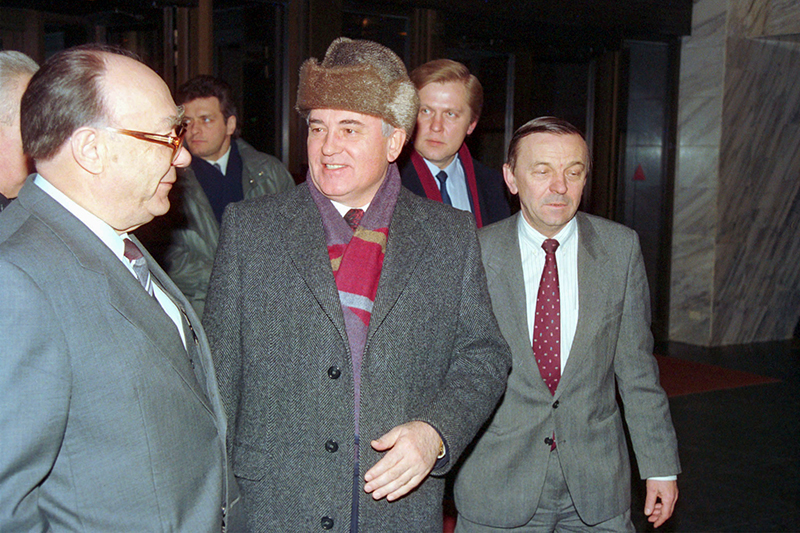 After the resignation of Mikhail Gorbachev, former President of the Soviet Union, met with Soviet and foreign journalists