For business rising prices is the main obstacle for doing business in Russia, said in a September ranking of the Davos forum. Inflation remains a major problem for Russian citizens, showed a December survey by the Levada center. However, in 2016, inflation for the first time in three years, has ceased to be in double digits. Price growth by year-end, according to the official forecast to slow to 5.8% and the Ministry of Finance expects that the figure is even lower — 5.5 percent, said December 23, the Minister of Finance Anton Siluanov. “This is a record low inflation — said at the annual big press conference President Vladimir Putin. — This gives every reason to believe that we can achieve the targets and in the near future to reach the levels 5% and then 4% inflation.”

In 2014, following an exchange of sanctions and counter-sanctions, and falling oil prices, the inflation rate soared to 11.4%, and by the end of last year reached 12.9 percent.

This year, the Central Bank and the Finance Ministry were United in setting ambitious targets, in 2017, to get inflation to 4% and hold it at the same level in the next two years. The achievement of this goal became the main theme of the vast majority of interventions of the Central Bank. At the same time, the head of the regulator Elvira Nabiullina rejected the claim of “obsession” on inflation. Bank seeks to slow down prices to the detriment of economic growth and understands that targeting alone will not help to increase GDP, she said. “We understand that there must be a coherent policy of fiscal consolidation, monetary policy and structural reforms”, — said Nabiullina at the Congress of the RSPP on December 19. 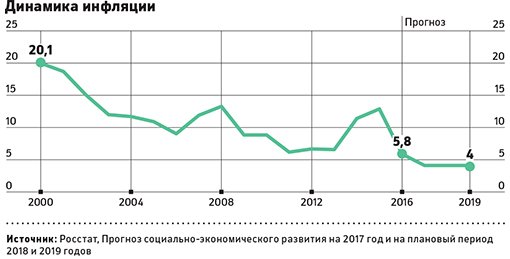 Russian officials again in 2016, announced the imminent return of the economy to growth, but it is not — and this is especially noticeable if to look at incomes. In real terms they are down for the third consecutive year. The most profound drop in 2016 was observed in August — according to specified data of Rosstat, in this month’s real income dropped by 8.5%. The income ceased to fall, but only in certain groups of the population, said in late November, first Deputy Prime Minister Igor Shuvalov. The overall trend remains negative, although the fall and is not as rapidly as in summer.

While wages are growing, both in nominal and in real terms, but from a fall in disposable income this does not help — in estimating the wages deducted compulsory payments (taxes, fees, utility payments), and they are growing in recent years.

The authorities plan to reach the growth of real incomes of the population in 2017, Siluanov said. Incomes of Russians will grow 0.2% in 2017, and in the next two years growth will accelerate to 0.5 and 0.8%, according to the official budget forecast. A more optimistic scenario of economic development “Basic+” which foresees revenue growth of 1.2, 1.8 and 2.2%. 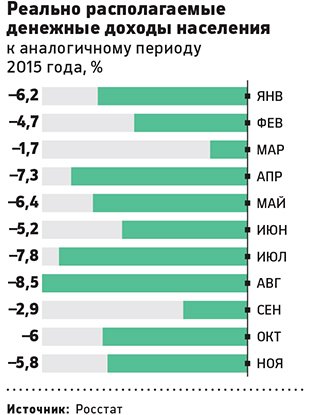 To save is not to consume

The state of consumer demand — the main factor of a fall or growth of the Russian GDP, pointed out analysts at URALSIB and Raiffeisenbank, and in 2016 the dynamics of consumption is quite consistent with the General trends in the economy. Retail trade turnover in 2016 has not grown in any month, the plot was only in its rate of fall, which in the three months of autumn for the first time since February slowed to less than 5%. Earlier consumer activity correlated with the dynamics of real wages, but now this trend has stopped, as people become more inclined to savings. Such a paradox — wages are rising, consumption is falling — was observed in 2009-2010, but then he wasn’t as sharp, the Director of the consolidated Department of macroeconomic forecasting of Ministry of economic development Kirill Tremasov. Even populations with low incomes, which are traditionally more inclined to spend money than to save money, reduce consumer spending, as more and more Russians live below the poverty line, wrote in his review chief economist at Alfa Bank Natalia Orlova. Retail trade turnover, it follows from the budget forecast, should begin to grow in 2017 — though only by 0.6%. In the next two years the growth rate is expected to increase by 1.1 and 1.8 percent.

The economic decline is accompanied by a decline in investment. Rosstat does not provide operational monthly statistics on investment in fixed capital, but even from the available information it is evident reduction. In the first quarter, they decreased by 4.8% compared to the same period last year, a further decline slowed in the first nine months it amounted to 2.3%. Businesses and citizens are hoarding money, will not putting them, complained of the ex-Minister of economic development Alexei Ulyukayev. However, this problem is not new, it was in the “fat years”. The authorities promised the simultaneous growth of the GDP, and investment — Ulyukayev predicted that investment activity will resume only in the second half of next year. And GDP will be “in the relatively small parameters of economic growth” at the beginning of the year, said in an interview “the First channel” in October, Prime Minister Dmitry Medvedev. The head of the Central Bank Elvira Nabiullina believes that the investment growth you need inflation to 4% or below. 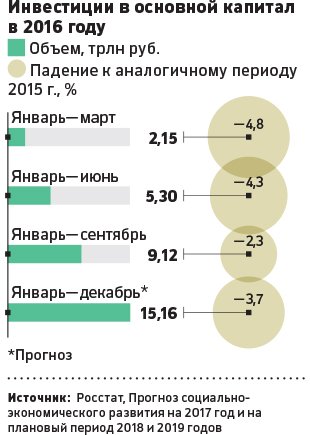 The economy has weathered the arrest of his Minister

One of the most significant events in the Russian economy and “acroeconomic” in 2016, was the arrest of the Minister responsible for its development, but for business it’s a shock he did not. About the detention of Alexei Ulyukayev, the Investigative Committee said on the night of 15 November. Official accused of receiving bribes in the amount of $2 million for the results a positive assessment, which allowed Rosneft to buy a stake in Bashneft. Subsequently, the speaker was placed under house arrest, President Vladimir Putin fired him because of the loss of trust, and the new Minister is 60-year-old officer was 34-year-old Deputy head of the Ministry of Finance Maxim Oreshkin, received the status of the youngest member of the government.

Putin called the situation with Ulyukaev a “sad fact”, for Medvedev it was “beyond comprehension”, and 18% of Russians, according to Levada center, considered the arrest of the Minister of one of the most important events of the year. The market claims to the Minister not excited. The MICEX index on the day following the arrest closed with a slight decline of four points, and the next day climbed above $ 14 Nov. 24 November, the index for the first time in history exceeded 2100 points, and on December 8 crossed the mark of 2,200 points. 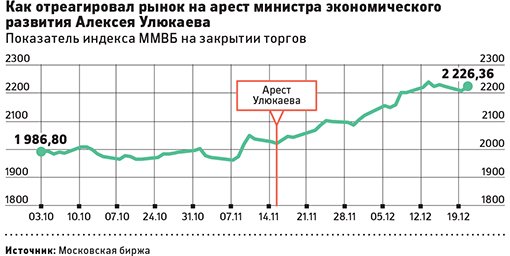 Create SP as a response to the stagnation

Stagnation did not stop to grow the number of individual entrepreneurs. In December 2013, there were 3.4 million SP, in 2016 they are already 3.6 million Is a convenient and straightforward tax regime, therefore, some businessmen who worked in the format of small companies, re-registered as EP says Vice-President of “Business Russia” Nikolay Ostarkov. In addition, the format of IP that people use to follow those entrepreneurs who previously worked on grey schemes and do not pay taxes, he said. This has been influenced by tax holidays for individual entrepreneurs, which have imposed many regions, preferential loans and the moratorium on planned inspections, adds the President of “OPORA Russia” Alexander Kalinin. On the other hand, some of the company’s relationship with its employees as with IP due to the difficult economic situation, but the proportion of such a forced measure in the growth of individual entrepreneurs does not exceed 10%, he said. 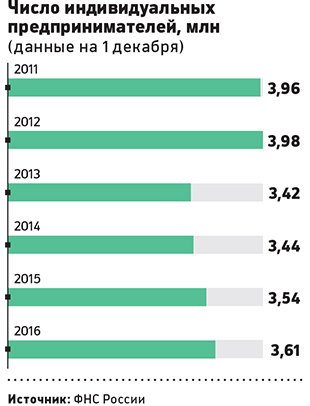 Russia’s budget helps to progress the overall economy and, in particular, to reduce inflation, keep unemployment low and provide low susceptibility of the economy to a frequently changing external factors, Siluanov said. The theme of the budget was also one of the main speeches of the officials of the financial-economic bloc. The talk going around fiscal consolidation — government spending next year will begin gradually to decline, and this policy will continue for at least three years. However, in real terms, as calculated, adjusted for inflation, they are down already from last year, that is, in General, the sequester will last at least five years.

Budget expenditures: in war and peace

Spending cuts designed to reduce a budget deficit occurs under conditions of depletion of reserves. The total volume of the national welfare Fund and Reserve Fund as of December 1, 2016, amounted to 6.7 trillion rubles, while a year earlier stood at 8.7 trillion rubles. While the Reserve Fund runs out in 2017, warned the Ministry of Finance. To Finance the deficit the authorities plan by increasing government loans and to replenish reserves calculated in 2020, when the new budget rule. If oil prices stay at least at $50 per barrel, the budget might get in 2017, an additional 1 trillion rubles, half of which can be directed to reserve funds to maintain their level, Siluanov said this month. 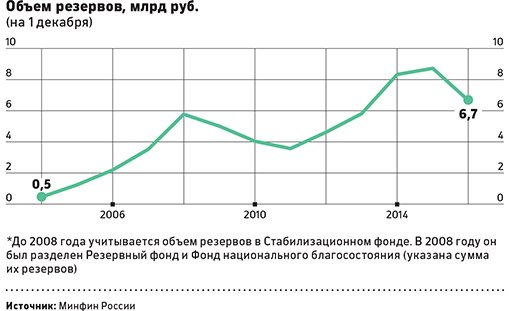 Concerns of industry is not justified

Business activity in Russia came to growth. The corresponding index (PMI) is calculated by Markit — if it is below 50 points, business activity is falling, if it is above the growing. PMI in the service sector increases from February, while the index of industry changed the path in the middle of the year: until may, he was falling every month, but since June has reached stable growth, and in November, it even reached a high of over 68 months.

The particular decline in industry was not, while in December 2014 it was expected and officials and analysts, said head of the laboratory of surveys of the Gaidar Institute Sergey Tsukhlo. However, in 2015, the government “misinformed” the industry is constant talk that the economy has crossed the bottom, he recalls. A sharp rebound did not happen, because of this, in early 2016, the industry experienced a disappointment, but by mid-year the rhetoric has changed, and officials, in fact, recognized the existence of a protracted crisis. This allowed the companies to more realistically assess their situation, understand that rapid change is not, and to adapt to it, believes Tsukhlo. 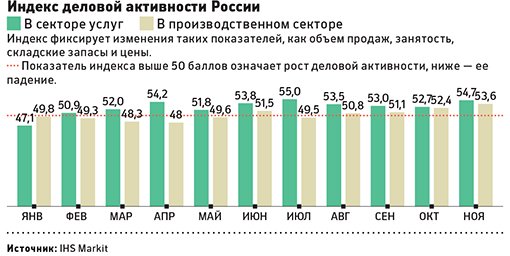 The mantra of growth

What is often said officials commenting on the situation in the economy? analyzed trapped in the media the statements of the members of the financial-economic bloc of the government and Deputy Prime Minister Olga Golodets, who oversees social unit. First and foremost, members of the Cabinet spoke about the budget, the second is about oil. The three leaders also included the word “privatization” (in December, a consortium of Glencore and sovereign wealth Fund of Qatar has acquired 19,5% of Rosneft).

In addition, officials paid attention to prices in their statements they, however, took only the fourth place. But, according to the Levada center, Russians consider the depreciation of money, the main event of the year. And in fifth place is the word “growth” — officials have repeatedly announced the imminent economic recovery and an increase, albeit slow, GDP. However, while this figure continues to decline, according to Rosstat (in January—September, GDP declined by 0.7% from the same period last year). The fall of the economy in 2016 spelled out in the budget forecast of 0.6%. Slow growth is planned in the next three years by 0.6, 1.7 and 2.1%, respectively. 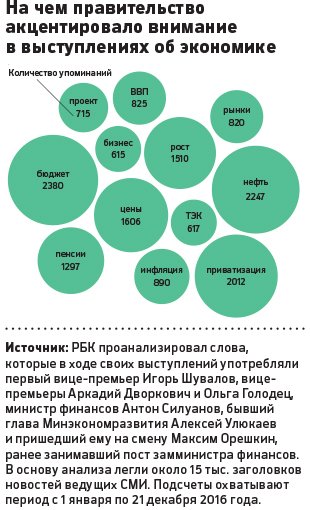 The citizens are waiting for challenges

Despite the announced economic recovery, many Russians still believe that the worst times are ahead. According to VTsIOM, in the first quarter of the year the figure was 52%, a record since 1997. And as of November a similar view is held by 47% of respondents. 22% of citizens believe that the worst is already behind us, even as many are of the opinion that the country is experiencing right now.