Thursday, 12 January, in Geneva began the main phase of the multilateral negotiations on the future of Cyprus. According to the organizers, the conference should be the final step in uniting the Greek and Turkish parts of the island. The current process of negotiations was launched in 2015 and is now in the final stage. The agreement in principle can be reached in the coming days. “The Geneva talks on the Cyprus issue and give both sides a unique chance to come to an agreement,” said participating in them, the Minister of foreign Affairs of great Britain, Boris Johnson. “Even if not to dramatize the situation, taking place in Geneva may be the last chance to organize life on the island the normal way,” said European Commission President Jean-Claude Juncker (quoted by New Europe).

Participate in the negotiations, the presidents of the Turkish and Greek parts of Cyprus Mustafa Akinci and Nicos Anastasiades and Jean-Claude Juncker, the UN Secretary General, antónio Guterres, which is his first trip since taking office on 1 January. Together with the Johnson participate in the negotiations of his colleague — Nikos Kotsias from Greece and Mevlut Cavusoglu of Turkey. Britain, Greece and Turkey are the guarantors of the balance of power on the island.

It is not excluded that the part of the guarantor States for the meeting will involve officials of a higher rank. According to The Guardian, a good sign can be considered and the consent of the Prime Minister of Turkey Binali Yildirim of to come to a conference (really, when will this visit is unclear): earlier, Ankara claimed that it is ready to operate at such a high level only in the case of “serious progress”. In a press-service of the Greek Prime Minister Alexis Tsipras told Reuters explained that the Prime Minister is ready to come to Geneva, “if there is a solution to the problem.”

How long will the conference are still unknown. According to The Guardian, none of the delegates have not booked return tickets. 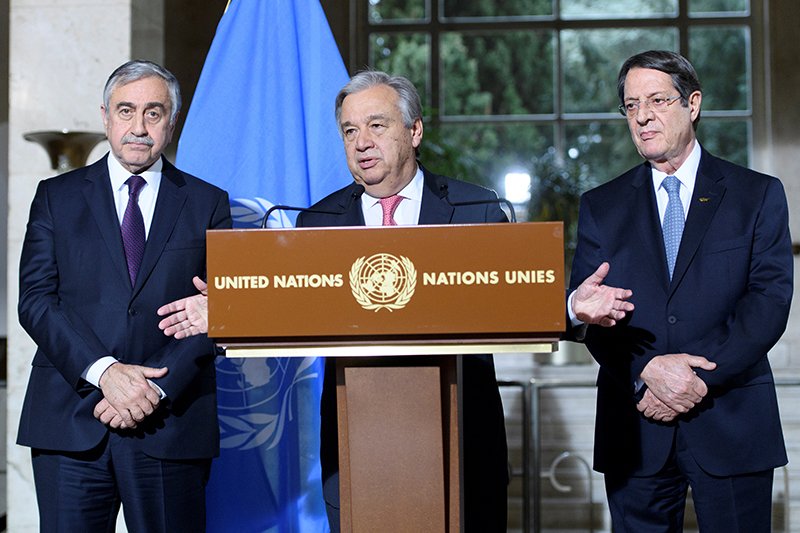 President a Turkish Cypriot Mustafa Akinci, the Secretary General of the UN Antonio Guterres and the President of the Greek part of Cyprus Nikos Anastasiadis (left to right) at the negotiations in Geneva

The Isle of discord

More than 40 years, the island is divided into two parts, although in reality the controlling party in the territory of four. This is the Republic of Cyprus, inhabited mainly by Greek, Turkish Republic of Northern Cyprus (TRNC), as well as the demarcation strip under UN control and two military bases, which have the status of British overseas territories.

From Geneva to Geneva

The problem of the division of Cyprus occurred immediately after the grant, in 1960, independence from Britain. Elected President of Cyprus Archbishop Makarios initially supported the Greek nationalists, who soon began to fight with him, seeking of annexation of the island to Greece. In parallel, Ankara tried to interfere in the Affairs of Nicosia, for fear of persecution of the Turkish minority.

In July 1974 the Greek government by the “black colonels” were able to overthrow Makarios and install on the island the power of irredentists, supporters of unification with Greece. After a week, Turkey started a military intervention on the island, citing fears for the lives of Turkish Cypriots.

The threat of the military-political crisis led to the ouster of Greece dictatorship “black colonels”. Meanwhile, Ankara has declared North Cyprus a state of the Turks, which was later called the TRNC. Of the States members of the United Nations only Turkey recognizes the independence of the TRNC. Northern Cyprus lives off subsidies from Ankara, the Turkish part is not working international company.

Negotiations to reunify the two parts of the island with varying degrees of intensity going since 1974 (their first round was held in Geneva a few days after the Turkish invasion). The last serious attempt to solve the problem occurred in 2004, when UN Secretary General Kofi Annan proposed to create a single Republic of the two autonomies of the Greco-Turkish Presidium headed. In a referendum the same year on the Annan plan, 75% of Greek Cypriots voted against the proposal: there is not indicated the need for the withdrawal of TRNC Turkish troops.

The British bases occupy about 3% of the whole territory of the island, or 254 square kilometres, of which only 60% of the land in these two areas is privately owned by the British and the Greek Cypriots. The remaining 40% owned by the UK Ministry of defence.

The issues of land and property were key in the negotiations, writes The Telegraph. We are talking about the restitution of the Turkish Cypriots in the South and Greek Cypriots in the North, and about change of borders between the Turkish and Greek parts. The British government has expressed readiness to transfer half of them now controlled by the Cypriot territory of the United Republic, if the agreement between the Northern and southern parts of the island will be achieved, says The Guardian.

On Wednesday it became known that the leaders of the Turkish and Greek parts of Cyprus have exchanged alleged plans to partition the territories in the future United Republic. If the plan of merger will be approved, in the summer of 2017, he will be put to a referendum in both parts of the island — like the 2004 vote on the Annan plan. The agreement on the referendum was reached in October. 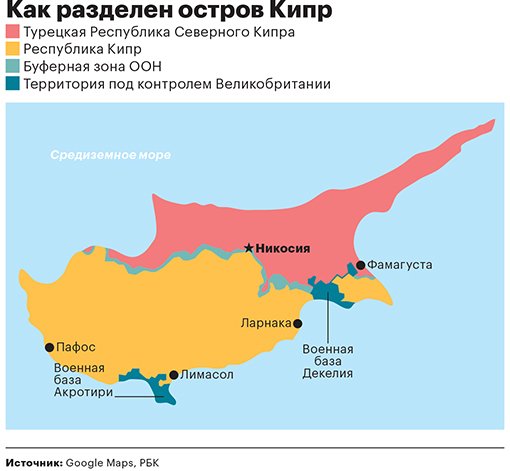 From the result of the talks in Geneva depends on the development of energy relations in the Eastern Mediterranean, writes the Jerusalem Post. To the South-East of the island, halfway to Israel is a major gas-bearing district. Part of it (the field “Aphrodite”) is located in the exclusive economic zone of the Republic of Cyprus, the other part (the field “Leviathan”) belongs to Israel.

As noted by the Jerusalem Post, for the sale of its gas to Turkey and Europe, Israel is planning to build a pipeline near the Cypriot shore, so tel Aviv is interested in the normalization of the political situation on the island. Thus, writes the edition, the pipeline is unprofitable to Moscow, which wants to keep its share of the European market and would at least redirect export Cypriot and Israeli gas to the West via Egypt, where Russia has a noticeable impact. For example, “Rosneft” in December involved in the development of the field of Zohr.

Energy plans neither Cyprus nor Israel are not a competitive threat to Russian projects, said the Deputy Director of the national energy security Fund Alexei Grivach. On the one hand, these projects are at an early stage of development: in “Aphrodite” is ready only one well, and in Israel, neither the government nor the investors has determined the plan for the withdrawal of gas to the market.

According to Grivach, Israel is more interested in saturating their own energy, rather than switching to exports. Plays a role and that the Israeli pipeline to Greece via Cyprus and Crete can displease Turkey, which has its own interests in the region. Finally, even in the case of the gas pipeline, the volume of supply will amount to 5-10 billion cubic meters per year — ten times less than the export to Europe of Russian gas. “Due to the growth of consumption in the EU, this volume may not affect the share of the Russian market, while we can talk about diversification of supplies,” — emphasizes Grivach.