Us lawmakers took the first step towards the abolition of Obamacare — health care reform held by President Barack Obama, with the support of the democratic Congress in 2010.

The US President-elect Donald trump during election campaign repeatedly promised that will repeal this reform and will offer American citizens alternative plan.

In less than a week before the departure of Barack Obama as President of USA both houses of Congress controlled by the Republican party, has approved the start of the abolition of Obamacare, but the details of the new project, which will replace the repealed law, Congress has yet to agree. The first version of the new law must be submitted to Congress by January 27.

It regulates the process of acquiring insurance policies on U.S. citizens and provides a number of measures designed to reduce the expenses budget part of health care, improving transparency of payments between insurance companies, hospitals and Federal government, and motivating physicians to avoid prescribing excessive number of costly medical procedures.

The law tightened rules for companies, employing more than 50 people, requiring them to compulsorily provide insurance plans for all employees.

He also ordered all Americanswho work for smaller businesses or not working at all, to buy insurance plans at their own expense.

Significant changes apply to the work of insurance companies. They were forbidden to lay a profit of more than 20% of the cost of insurance and to refuse customers in the sale of insurance plans on the basis of advanced age or state of health of the client. Another important point related to the resolution included in the insurance plan of the parents of children under the age of 26 years (previously only up to 18 years) who have not yet managed to acquire their own insurance.

Insurance companies sell medical insurance with different competitive conditions in the special state exchange (exchanges and States), where every US citizen can select the appropriate cost and terms of insurance plan.

Why was the need for reform?

By the time the major provisions of reform take effect at the end of 2013, insurance was not at the 39.6 million Americans (20.4 percent).

To increase the availability of health insurance under the law, a scheme of partial subsidizing of expenses on purchase of insurance for private persons (or companies that buy insurance for their employees).

Obamacare offered a departure from the practice of appointing “a single value” medical procedures when, for example, a hip replacement was estimated at a fixed amount regardless of how many tests and studies have been conducted. In these conditions, notes The Economist, the doctors do not particularly think about the value of individual manipulation and prescribed many unnecessary procedures. Under Obamacare health workers receive a financial reward for reducing the cost of treatment for patients and are subjected to penalties for poor care (for example, if the patient picked up the infection in the clinic).

This measure, according to the authors of the reform, should also in the future to significantly reduce the state costs of funding social insurance programs for people with low income and patients older than 65 years.

In addition, all new insurance plans must include measures for disease prevention that in the long run should also reduce the cost of medicine.

What will happen to those who fail to meet the statutory requirement to purchase insurance?

For companies and individuals who violate the law, provided for a monetary penalty.

Companies that don’t provide insurance to employees must pay $2 thousand per month for each employee without insurance. “Fine” citizens for refusing to purchase insurance, is calculated in two different ways — as a percentage of total family income or in absolute terms per person. US citizens who do not have insurance are required to pay annually or $695 per adult (and $347,5 per child) or 2.5% of family income — whichever amount is higher.

In 2012, the U.S. Supreme court ruled that the money required to pay the perpetrator — should be considered not as a penalty but as a tax.

What are results of reform?

However, from a financial point of view, the reform proved to be burdensome for the Federal government and for state budgets. According to the U.S. Department of health, from 2009 to 2016 total Federal budget spending on healthcare has increased by more than 30% ($295 billion), and States expenditure by 27% ($156 billion).

In addition, large financial losses because of Obamacare suffered an insurance company. The total number of bankrupt because of Obamacare the insurance companies by August 2016 reached 16, noted CNBC. So, for example, a large insurance company Aetna announced that it would stop selling its insurance plans in 11 States because of the financial losses under Obamacare. The company reported that for the second quarter of 2016 lost $200 million, and total more than $430 million from January 2014. In addition to Aetna, about his plans to stop work in a number of States also declared such large insurance companies like Blue Cross and Blue Shield, Humana and UnitedHealth Group, and others. The departure of major insurers has led to higher prices for insurance plans in several States.

Previously it was assumed that the costs of the insurance companies that they will inevitably suffer at the first stage of the realization of the reform in life because of the ban on denial of services due to the health of customers and a large number of new insurance cases, will be compensated for by subsidies from the budget and due to the purchases of insurance plans a large number of previously uninsured citizens. However, the expected number of insurance plans companies could not be reached.

The main reason for the failure of this idea is that the plans offered by the insurance company unattractive to patients and are generally more expensive than payment of a monetary penalty imposed by government for those who refuse to buy insurance, said the head of consulting company Health Policy and Strategy Associates Robert Lazewski.

They want the Americans cancel Obamacare?

A public opinion poll conducted by Gallup in September of 2016 showed that 51% of Americans do not support Obamacare. However, only 18% of the respondents claim that the law was beneficial to their families; 29% of respondents say that it did hurt them. 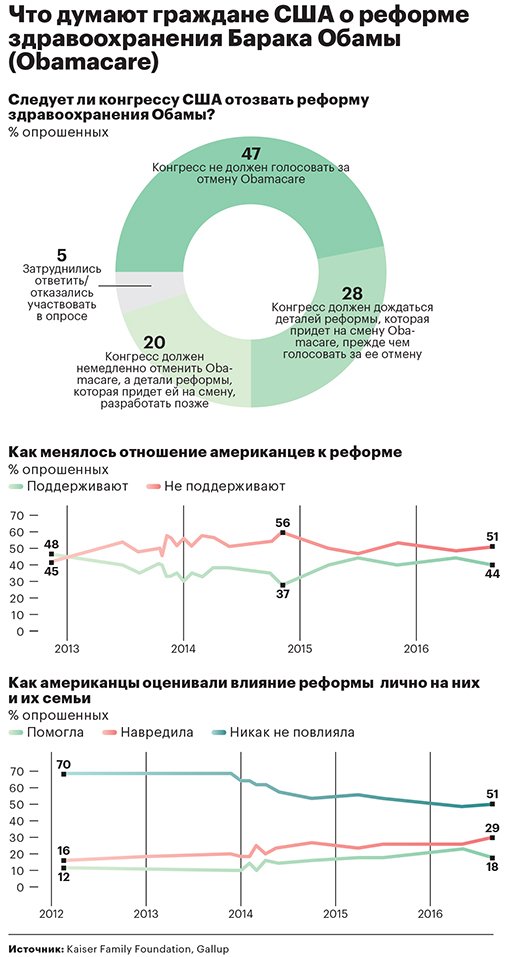 According to the “think tank”, specializing in the study of health issues, Kaiser Family Foundation, Americans with anxiety about the future of the health system of their country. 28% of US citizens believe that before you can withdraw medical reform Obama, you need to develop the details of the program, which it will replace, and 47% of respondents believe that Congress should not vote for the repeal of Obamacare. And only 20% of Americans believe that the repeal reform needs immediately, not waiting until the U.S. Congress will develop a new plan.

With the participation of Alena Mahakavi