The Russian banking sector has commenced implementation of systems of biometric identification of customers — by voice, face image and fingerprints, told representatives of several large Russian banks. Simultaneously, the Central Bank, the Ministry of communications and the Federal financial monitoring service has begun work on the creation of a unified biometric database, which will expand providing Russians with remote banking services. However, the full implementation of new technologies in Russia will take several years, experts say.

In particular, VTB24 by the end of January will start testing biometric identification within Internet banking. “We will offer users of mobile applications on the iOS platform to participate in a pilot project that will last 3 months. Its main objective is to check the readiness of customers to use new technology,” — said the head of the Department of remote banking service of VTB24 Elena Degteva. Users will be prompted when logging in to the application online of the Bank to provide your picture and a sample of your voice (make selfie and record voice using the microphone in the phone. —) — they will be identified. After it passes, all operations will be performed without additional confirmation, said Degteva.

VTB24 also preparing to launch a project voice of the customer identification, the caller at the call center. As announced in October last year, the Bank, the identity of the client is planned to confirm the previously recorded and provided to the Bank “reference” sample voices. According to senior Vice-President of VTB24 Natalia Smirnova, testing technology will be held until September and the scale of the run will largely depend on the results of “running”.

Similar technology is already working in Tinkoff Bank, said his spokesman. “In the future we plan to make wider use of voice recognition and to introduce facial recognition to identify customers,” he adds.

Deputy head of retail products, e-business and CRM of Bank VTB Alexander Solonin said that the Bank is currently working on implementing Touch ID technology (fingerprint scanner, used in several recent iPhone models). According to Corned beef, the scanner will be used in the mobile Bank for individuals. “The fingerprint will be used not only to log in to the application but also to confirm transactions”, — he explained.

This technology is already used in PSB and “home Loan”, said the representatives of these lending institutions. Authentication in the mobile Bank is tied to the fingerprint scanner in Apple phones. Sberbank has implemented a customer identification technology Touch ID in 2014.

Biometric customer identification system based on face recognition is also used in some Russian banks. In 2015 it will be implemented Leto Bank (Post Bank), said the representative of the credit institution. Biometrics new customers Mail Bank compared with the existing client base, as well as sluchautsya database of fraudsters, he says. System used to combat internal and external fraud in the lending and authorization of employees of the Bank. “She quickly paid for itself, and its use has enabled the Bank to save about 100 million rubles,” — said the representative of the Bank.

In 2016, the savings Bank implemented a series of pilot projects involving the use of biometric technology in different service channels and use cases, said the representative of the Bank. The Bank has also accredited the company VisionLabs, Comlogic, ProSoft, Biometrics and Fujitsu Technology Solutions as providers of recognition systems.

Negotiations with potential suppliers of systems of biometric identification of clients leads Binbank, head of innovation development center of the Bank Pavel Chebotarev.

Several biometric technologies is currently testing the Raiffeisenbank, told the head of Department for integrated risk management of the Bank Sergey Mushroom.

The inclusion of biometrics in the internal processes in the customer service industry is actively studying ROSBANK. “We launched a major project on the inclusion of biometric data in our operating system. This was preceded by a number of pilot projects, which gave good result in reducing the number of fraud at the stage of analysis of credit applications”, — said the Director for change management of ROSBANK Elena Bronnikova.

The Central Bank is preparing to biometrics

The Bank of Russia, meanwhile, has started the next phase of work on a single database of biometric data study of the security issues and the legal Foundation for the remote identification of customers, said the press service of the regulator. The pilot “run-in” biometric identification system, which will be attended by several retail banks, a scheduled Bank of Russia for 2017.

The project was developed by the Bank together with the Ministry of communications and Rosfinmonitoring. As previously mentioned , its implementation will allow to abandon the physical presence of the customer when opening an account in the new Bank. “You can come to one Bank at either end of the country, confirm the account [“Services”], and then to move to Moscow, and, if necessary, to remotely open a Bank account in the future to submit an application for the loan,” — said on the forum Finopolis 2016 in October, the Chairman of the Central Bank Olga Skorobogatova.

The system will work. After face-to-face client identification in the Bank in his profile on “public Services” will have a corresponding mark. If the customer decides to take advantage of remote services of another Bank, this Bank received from the user authorization to access its personal data in the “public Services”, will be able to identify a person; such identification will be tantamount to the presentation of a passport.

The specific terms and participants of the pilot project has not yet been determined, it follows from the review of the Central Bank provided .

The pilot project will take 12 months, said Alexander Khanin, CEO of VisionLabs, the company-software developer for face recognition. Customers of participating banks can register their faces (a picture for entering a photo in the reference database), so that these images can be used for remote authentication. Thanks to her, clients will have access to current accounts, the opening deposits, loans, transfers and payments, lists Hanin. 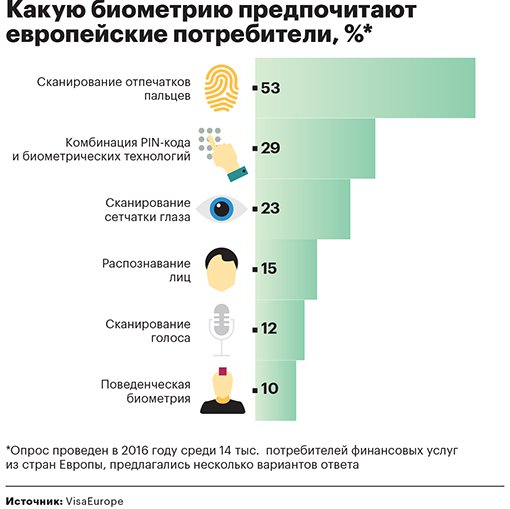 The future in the faces

Despite the interest of banks and financial authorities to biometrics, widespread implementation in 2017 will not be, said the source . In Russia, this method of customer identification may be widely disseminated in 3-5 years, says the head of the office for the protection of online and mobile banking, “Kaspersky Lab” Alexander Ermakovich. “We should not forget about the problem of privacy — not all users are willing to share with the Bank data such as a fingerprint or an iris scan,” he adds.

According to the Ermakovich, today biometric authentication methods cannot be called absolutely safe. “The technology is new, not all developers know how to use it. Attackers, in turn, begin to look for vulnerabilities in it before the introduction of mass products”, — the expert warns.

On the complete replacement of biometrics and other identification methods is not yet mentioned, agrees member of the management Board Mail Bank Pavel Gurin. However, he believes that the current methods of identification can be enhanced biometric. “For example, familiar with identify the client couple “login — password” will soon be history. But for transactions with higher limits or more risky as a “booster effect confidence” can be used for biometric identification,” says Gurin.