Donald trump, the incoming President of the United States January 20, breaks many stereotypes of the American presidency. Trump, apparently, will be the first leader of the United States, for which social network (mainly Twitter) is the predominant method of communication with the public. From the date of election of the President trump wrote 354 tweets — an average of five messages a day. In their tweets (as in conventional performances), he does not hesitate to praise or criticize a particular company, thus directly affecting their quotes.

“The US President is the most powerful man on the planet. Every word has a value that you agree with him or not,” writes Bloomberg columnist Barry Ritholtz. Financial players have realized that any tweet new US President can move quotes from individual companies or entire markets. To the day of the inauguration of the trump FINTECH London-Trading firm.co.uk has launched an app that monitors Twitter @realDonaldTrump and generates trading signals based on references in it companies. “Direct your attention to the perpetual Twitter of the person who is about to become President. In these 140 characters are valuable information that can move markets and change the perception of key corporate indicators,” urges Ritholtz.

During the presidential campaign and after the election, trump mentioned in his Twitter 19 companies, estimated by The Hill. For example, in February 2016, trump urged “to boycott all Apple products” until the company will help the intelligence agencies to crack iPhone the suspect in the attack in California. In December, he criticized Boeing and Lockheed Martin for “out of control” costs for the new presidential plane Air Force One and fighter aircraft of the new generation F-35 (shares immediately fell). By contrast, in early January 2017, trump praised Ford and Fiat Chrysler for the decision not to move production to Mexico, and then told about the “great meeting” with Alibaba founder Jack MA (they discussed the creation of 1 million jobs in the United States). Alibaba shares soared by 1%. 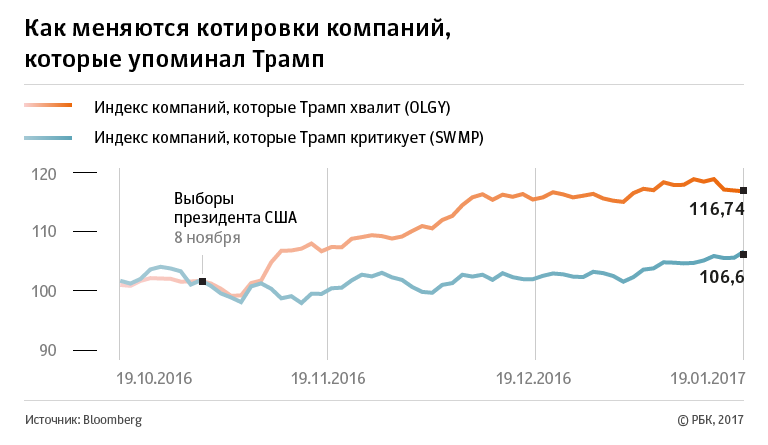 Bloomberg decided to help investors and formed two indexes, one collected by the company, of which trump has voted favorably or whose top managers he called in his team (as, for example, the head of ExxonMobil Rex Tillerson), the second — companies that have been criticized elected President. “Good” portfolio consists of companies Colony Capital, CoreCivic, Exxon Mobil, Facebook, Ford Motor, Goldman Sachs Group, JPMorgan Chase, PayPal, Sprint Corp., SoftBank and United Technologies.

The “bad” portfolio composed of shares Amazon.Com, Boeing, General Motors, Kellogg, Lockheed Martin, Macy’s, New York Times Co., PepsiCo, Rexnord, Tesla Motors, Time Warner, T-Mobile US, Toyota Motor Corp., Twitter Inc. and Constellation Brands. Some of these companies was not mentioned by trump in a negative way, but, obviously, can suffer for his views and statements. For example, a manufacturer of electric vehicles Tesla Motors Elon musk — trump expresses support for the oil and coal industry and believes climate change is “fake”.

A simple strategy long position on the first index and the second short — already would have brought the investor a noticeable income notes, Ritholtz. Index of companies — the “favorites” trump from 9 November to 19 January rose by 14.7%, while the index of companies affected by his words, rose only 5.3%, follows from the data Bloomberg terminal, is analyzed .