Where they plan to build a wall

On the border with Mexico. The length of the border — 3145 miles. Today the barrier, which began to build with bill Clinton to combat drug trafficking, constitute 1078 km trump plans to build another 1600 km.

How protected the border and from whom

According to the 2010 in the protection of the border with Mexico involved more than 20 thousand border patrol service since 2004 their number has doubled. On the border has 57 check point through which pass daily (in both directions) of around one million people.

The fence on the border is not continuous by design, some areas are only sensors and surveillance cameras. Its height throughout different.

On 25 January, the President of the United States Donald trump has signed a decree to strengthen border security and tighten immigration policy. According to the press Secretary of the head of state Sean Spicer, the first decree provides for the construction of a “major physical barrier on the border with the United States.”

In an interview with ABC News, trump said that the construction of the wall on the us-Mexican border will start “within several months”. In his speech to employees of the Ministry of internal security, he stated that he signed the decrees in this area “will save thousands of lives, save millions of jobs and billions of dollars.”

Beginning today, the United States of America gets back control of its borders. Full speech from today @DHSgov: https://t.co/CXn2u87Vv6 pic.twitter.com/48iZam5Fai

How much is the wall and who will pay for it

In the decree the sources of funding of the project is not specified. Agencies are instructed to prepare within 180 days all the calculations and conduct the necessary research. Speaker of the house of representatives Paul Ryan after the announcement, trump said that Congress can provide funding for the construction of the wall, having considered the question of the allocation of funds within the next two months. He stressed that the Parliament will cooperate with trump on the issue of financing the construction, as I agree with the need to ensure border security.

By trump estimates the cost of the construction of a wall on the border in the amount of $10 to $12 billion, although the first time he talked about it during the election debates, the sum mentioned was $4 billion According to experts, the cost can be up to $25 billion.

Journalists of the TV channel CNBC has estimated that the construction of the wall according to the plan, trump will cost the US government $15 billion to $25 billion And maintenance at $2.1 billion per year. The same amount were called The Washington Post. 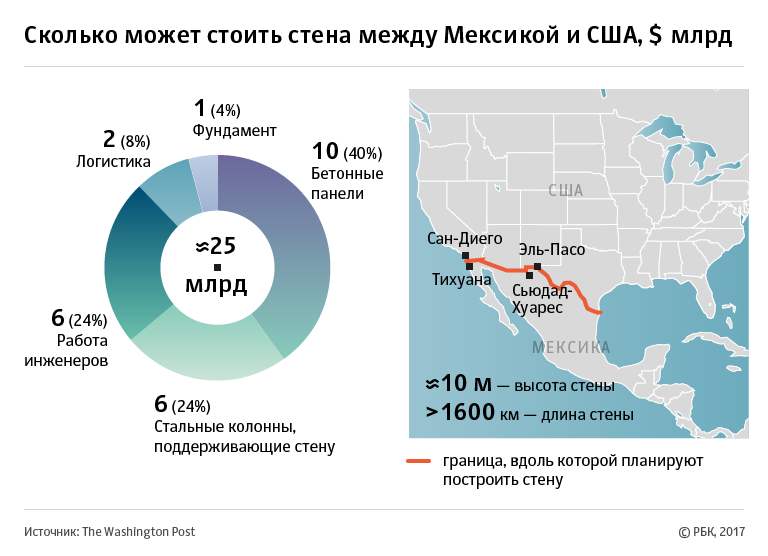 In a recent interview, trump noted that first, the US will build a wall, and then will require of Mexico the payment. Mexican President Enrique peña Nieto soon after the decree of the trump in his address to the nation said that his country does not intend to pay for the construction. Earlier in Washington announced the visit of the Mexican leader in the United States on January 31, however, according to media reports, peña Nieto is thinking on canceling his visit to Washington.

What can interfere with Trump to build a wall

A large part of the walls now takes place in places where otherwise it is very easy to cross, — on the plain to the West of El Paso, Texas. Cost of the construction represents the area on the border actually runs along the river Rio Grande. Environmentalists believe that the construction of the wall in this area will result in changes to the river and its shallowing.

According to the conclusion of law school, the University of Texas, the resumption of construction will lead to a large number of claims and litigation between landowners and the government.