“The advance step by step”

Moscow “categorically disagree” with the assessments of the OSCE about the involvement of militias to ceasefire violations in the Donbass, the offensive leads Kiev, said the press Secretary of the President of Russia Dmitry Peskov told reporters, commenting on the OSCE report, which was called “Russian-separatist forces” to restore the truce. According to him, “we are talking about provocative actions by the armed forces of Ukraine and individual groups”.

“Actually, we’ve heard you and some of the statements of the representatives of the Ministry of defense of Ukraine, which States that we are talking about the progress meter after meter forward from the armed forces of Ukraine, that is, de facto, confirmed the offensive. This action, which undermined the regime of the Minsk agreements. And now it’s important it all strongly to make an appeal, first to the proponents of offensive action, and it is to Kiev, to stop these provocations,” — said Peskov told reporters.

Earlier, Deputy defense Minister of Ukraine Igor Pavlovsky said that the Ukrainian army “step by step” moves forward in the Donbas after the assault militia of Avdeevki.

Fighting in Avdeevka between Ukrainian forces and the self-proclaimed DND on Wednesday afternoon to discuss the trilateral contact group in Minsk. This was announced by the representative of ex-President Leonid Kuchma of Ukraine Darka olifer in Facebook. According to her, the Ukrainian side has already discussed the situation with representatives of the OSCE military representatives of Ukraine and Russia in the Joint center for coordination and control (SCCC).

To conduct a video conference of the Minsk group had failed for lack of representatives of the breakaway republics and Russia. For the urgent convening of the contact group “any format” eve insisted the President of Ukraine Petro Poroshenko.

The situation in Avdeevka

As of Wednesday afternoon said the head of the Donetsk military and civil administration Pavlo zhebrivskyi, last night in the town was much quieter previous. He stressed that the city continue to fire with controlled DND site “from “Grad”, tanks and guns,” but the intensity of attacks compared with yesterday fell. In a press-service of Donetsk administration announced agreement on a cease-fire to start the repair work on restoration of power supply Avdeevka. “Our maintenance crews have already left for break power lines. With stormy okkupirovannoy areas also drove a team of elektromonter” — leads the administration of her head Zhebrivskyi.

Ukrainian Deputy Minister of defense Pavlovsky also confirmed the decrease in the intensity of the attacks, adding that the city is still shelling from artillery and small arms.

The fighting began at Avdeevka January 29 — the city under Ukrainian control is located to the North of Donetsk. The military crisis was preceded by a blockade of the railway communication across the line of demarcation 25 January, which gave veterans of the antiterrorist operation (ATO), protesting against smuggling between the republics and Ukraine.

The result of the most serious attacks in 2014 in the city was damaged line, which almost stopped the work of Avdeevsky coke-chemical plant (AKHZ) and Donetsk filtration station. Avdiivka coke plant included in Metinvest group of businessman Rinat Akhmetov, one of Europe’s largest producer of coke products for the steel industry and enterprises. The head of the plant stressed that if production stops, to start again is no longer possible, and this will lead to a humanitarian catastrophe in the town that will lose their heating (in the last days in the area were 20 degrees of frost). The city is deprived of electricity and water.

In connection with the aggravation of the situation and the threat of a humanitarian disaster in the city declared a state of emergency. According to the Ministry of regional development, construction and housing of Ukraine, Avdeevka for evacuation prepared 80 buses and two trains. The state service for emergency situations of Ukraine is ready to evacuate 12 million people from 30 th Avdeevka in the surrounding areas.

As reported by an eyewitness, of the Town, today the city authorities and volunteers organized the evacuation of local residents, primarily children in Slavyansk and Mariupol, Donetsk region. The interviewee said that sounds of firing is still audible, and to talk about the offensive of the regime of silence is impossible. 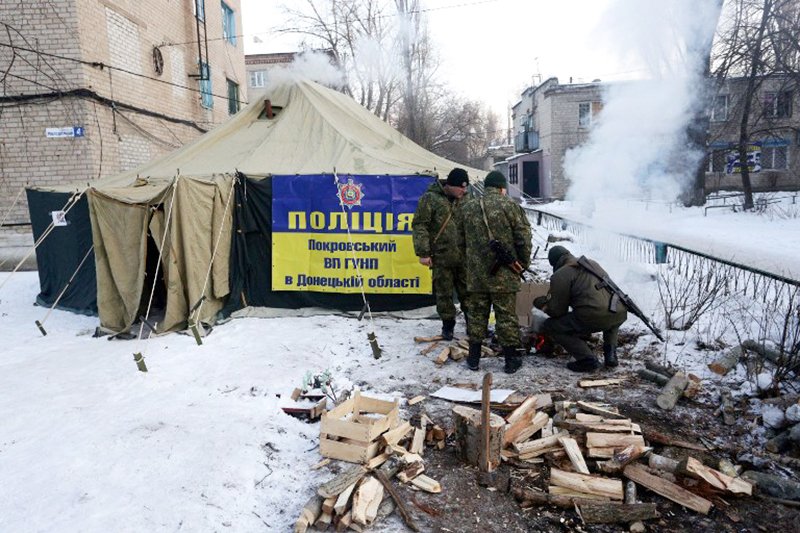 In the escalation of the conflict in the area Avdeevka each other has accused both sides — the Ukrainian military and representatives of the self-proclaimed DND. According to sources, “Ukrainian truth” the intensification of hostilities under the plant may be associated with the DNR trying to regain control of passing in this area of the route Donetsk — Gorlovka. For DNI, it is strategic because both cities are controlled by the forces of the unrecognized Republic, but now a stretch of highway near Avdeevka is controlled by the Ukrainian armed forces.

As stated by a soldier of the DND Alexander Zhuchkovsky, for the forces of the breakaway Republic, it is important to suppress the artillery, that shot under the control of the militia Donetsk and Makeyevka from the residential areas of the Town.

A group of deputies headed by Chairman of the Verkhovna Rada of Ukraine Andrey Parubiy called on the parliaments of several countries to force Russia to stop the destabilization of the Donbass. A number of Ukrainian MPs again raised the issue of the introduction of martial law.

At the same time, the heads of the parliaments of unrecognized republics of the Donbass Denis Putilin and Vladimir Degtyarenko appealed to the leaders of “Norman Quartet” with a call to force President Poroshenko to end the economic blockade of Donbass and to stop the attacks. Power DND accused the Ukrainian troops of shelling residential areas of Donetsk and surrounding towns.