The US President Donald trump said in his Twitter that he intends to explore “stupid” admission agreement USA refugees from Australia.

The Washington Post reported on Wednesday, citing its sources that this decision is the result of unsuccessful telephone conversation with Prime Minister of Australia Malcolm Turnbull, which took place on January 28. In addition to talking with Turnbull on the same day, trump had phone talks with the leaders of four other countries: Prime Minister Shinzo Abe, German Chancellor Angela Merkel, Russian President Vladimir Putin and French President Francois Hollande.

Conversation with Prime Minister of Australia the trump called “the worst” for the day, the newspaper reported. According to The Washington Post, trump flipped out after the interlocutor reminded him of the need to comply with the terms of the agreement, which in November signed with Australia ex-US President Barack Obama.

Australia has a strict immigration policy since 2013 and does not accept illegal migrants who reach the country by sea. Migration service monitors their movements and transports to the Islands of Nauru and Manus in special refugee camps. Both Islands do not belong to Australia: Nauru — the dwarf Kingdom, located on the eponymous coral island, and the island of Manus is part of the state of Papua New Guinea.

International human rights organizations have repeatedly criticized the extremely difficult conditions in these camps, reporting on numerous cases of human rights violations. In October 2016, Amnesty International has accused Canberra that the Australian government has transformed the distribution centers to the “open air prison”.

The agreement on the admission of refugees was signed in November 2016 between President Barack Obama and Australian Prime Minister Malcolm Turnbull. Under the terms of the agreement, the US pledged to receive refugees from a detention centre established by Australia on the Islands of Nauru and Manus.

Similar negotiations about the movement of refugees in Canberra led with the governments of Canada, New Zealand and Malaysia, said the Australian edition of ABC.

To oversee the transfer of refugees should the UN Commission for refugees, and the right to participate in the program will have only those who were in detention centres at the time of the announcement of the agreement.The Washington Post said that about 400 of 1254 people who are in refugee camps, may qualify for asylum in the United States.

Refugees at least three countries — Iran, Iraq and Somalia — fall under the decree of trump, temporarily prohibiting entry to the territory of the United States to citizens of Iran, Iraq, Libya, Somalia, Sudan and Yemen. In addition, the same decree in United States on 120 days restricted entry to all refugees and indefinitely for refugees from Syria. 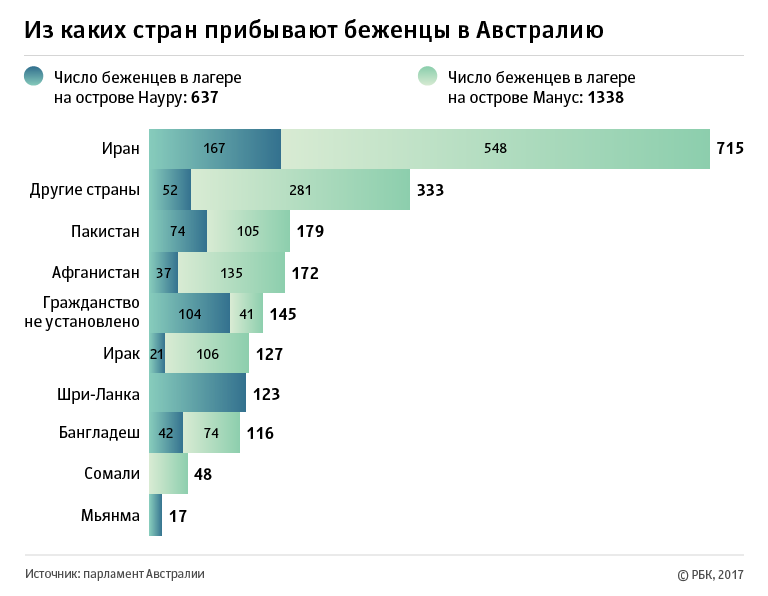 The Washington Post reports that trump called the agreement on the resettlement of refugees from the Islands of Manus and Nauru in the United States “the worst time” and accused Australia of trying to export “new Boston terrorists.”

Sam Turnbull refused to comment on the conversation with trump. “Such conversations are conducted directly, openly and privately. If you have seen reports about them, I’m not going to have something to add to them”, — he told reporters in Melbourne.

In addition to the Prime Minister of Australia less than two weeks of his presidency, Donald trump managed to show its intolerance to the President of Mexico and heir to the British throne Prince of Wales Charles.

Immediately after his inauguration, trump signed a decree on the construction of a wall on the border with Mexico. In his public speeches during the election campaign and after his inauguration, trump has repeatedly stated that to pay for the construction of this wall must also the southern neighbor of the United States. Mexican President Enrique peña Nieto, in turn, said that Mexico is not going to pay for the wall, and even canceled his visit to the US scheduled for January 31. Later, the presidents of both countries announced that they would discuss this sensitive issue in private.

The Associated Press, citing a transcript of a telephone conversation between the two leaders announced that trump has threatened Nieto to send American troops to Mexico to fight drug traffickers, but the White house and Mexico’s foreign Ministry this message is denied.

With Prince Charles, Donald trump did not agree on the assessment of climate change. The British newspaper the Sunday Times, citing a source in the government of great Britain announced that a state visit trump in the UK, scheduled for 2017, may be disrupted due to disagreements in the White house and the Prince of Wales on this issue. Trump has repeatedly criticized and promised to cancel signed by the United States in April 2016 the Paris agreement to combat climate change, and Prince Charles is a known supporter of the theory about the impact of human activities on climate change. Trump said he didn’t want to meet the Prince during his visit to Britain, due to the fact that I disagree with him on this issue.