Line with the attorney General runs from 17 June last year. The process of studying complaints against e-mail monitoring the head of the Supervisory authority. The Prosecutor General’s office provided statistics on complaints since June 17 last year to 3 November 2016. All on the line for this period has received 557 complaints.

Of these, 202 treatment related to raiding and other illegal actions against property of business entities. 143 times businessmen complained about the unjustified criminal prosecution, detention and other preventive measures.

123 times prosecutors complained about the violation of procedure of provision of public services, placing orders for public needs. 60 registered cases concern the violation of the procedure for conducting inspections. 29% of the businessmen said about the adoption of unjustified measures of administrative coercion.

The greatest number of messages addressed to the Prosecutor General of the Russian Federation of businessmen from Moscow, Krasnodar Krai and St. Petersburg.

The head of the state office of public Prosecutor on interaction with mass-media Alexander Kurennoy said that the complaints received in the Department on supervision of observance of the rights of entrepreneurs. The term of the audit on communication is seven working days, but may be extended to one month, and in exceptional cases to 60 days.

According to departmental statistics, from the beginning in explanation appeals to the Prosecutor General office has made 13 submissions, of which two satisfied and 11 are under consideration.

Earlier in January, at the meeting dedicated to the 295th anniversary of the Prosecutor General, Chaika said the return of business 40 billion rubles for the efforts of the Department. According to the public Prosecutor, in 2016, the supervisors have identified and eliminated 4.7 million violations of citizens ‘ rights, but only for prosecutorial acts repaid the debts on wages in the amount of 20 billion rubles.

Chaika mentioned the compensation to the budget of 6 billion rubles on the claims of prosecutors in the sphere of economy and the return of “hundreds” of illegally alienated property assets in municipal and state ownership. 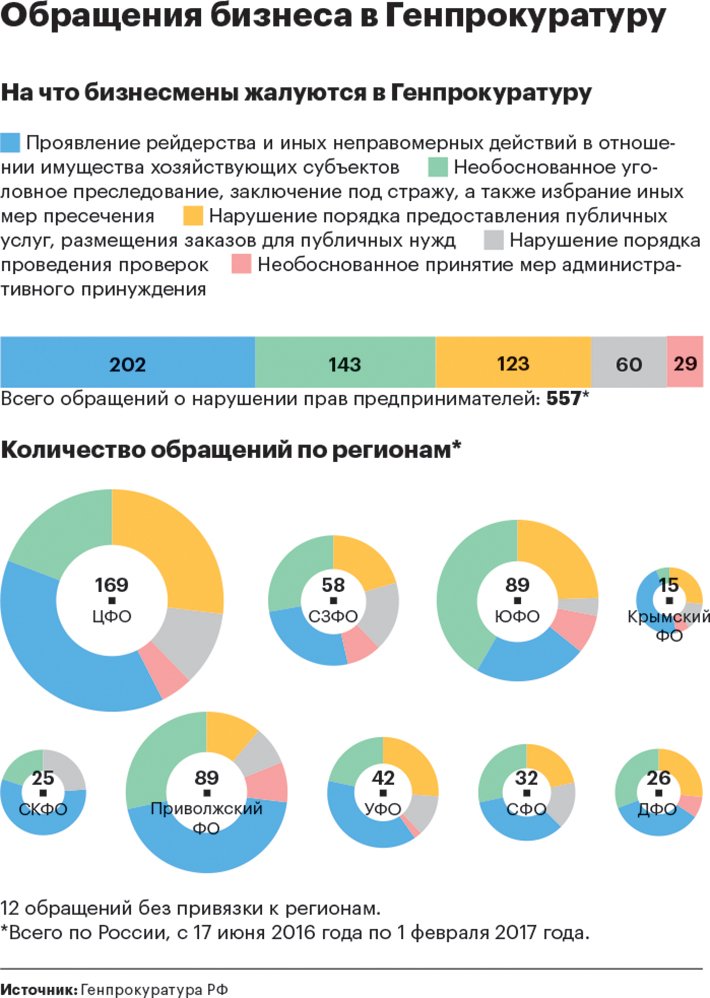