acquainted with the contents of the lawsuit to alpha Bank, which on 8 February in the Moscow Arbitration court filed a temporary administration of the Bank “Peresvet”. In this lawsuit, the Bank, which now essentially controls the Central Bank, is trying to challenge the legitimacy of enforcement by Alfa-Bank in the fall of 2016 concluded in February 2015 forward contract for the purchase of securities. In the lawsuit, “Peresvet” asks the court to declare the decision of Alfa-Bank on the involuntary termination of forward transaction is illegal. A hearing on the lawsuit is scheduled for March 15.

As previously reported, the paper was bought on credit funds of Alfa-Bank in the interests of “Peresvet”, which later had to repurchase them on its balance sheet, thereby returning the alpha Bank loan. Ensure it was made of paper and guarantee deposits “Peresvet” in Alfa-Bank. The number acquired in the interests of “overexposure” of the securities includes bonds, gtlk, the Bank and “Opening”, as well as Eurobonds of LUKOIL and Evraz. Also was purchased promissory notes of several construction companies (“Relight-invest”, “Articlemetro”, “Pilot Consulting”, SWISSBEL, “Stroyform”). The cost of the acquired Alfa-Bank securities at the time of introduction of temporary administration in the “Peresvet” was estimated to be worth about 9 billion rubles, and a significant proportion of the portfolio accounted for the promissory notes. Guarantee for performance of obligations under the forward was two deposits, which “Peresvet” posted in Alfa-Bank. The amount of margin on bonds and Eurobonds amounted to slightly more than 800 million rubles., and on bills “Peresvet” made as security for 4.8 billion roubles, the aggregate of 5.6 billion rubles.

The day before the introduction of the interim administration of Alfa-Bank demanded from “overexposure” to fulfill the forward contract, appointing the date of the transaction on 20 October 2016. However, the “Peresvet” has not fulfilled its obligations, explaining that at that time the Bank already had a card file of outstanding claims of other creditors and the fulfillment of the terms of the forward contract would violate their interests. On 21 October, the Bank of Russia introduced the “Peresvet” interim administration and declared a moratorium on satisfaction of creditors ‘ claims. In turn, alpha Bank has charged “Peresvet” who were with him on Deposit, and sold part of the securities portfolio. Remaining after the sale of securities (1 billion roubles), Alfa Bank returned a “closest distance”. 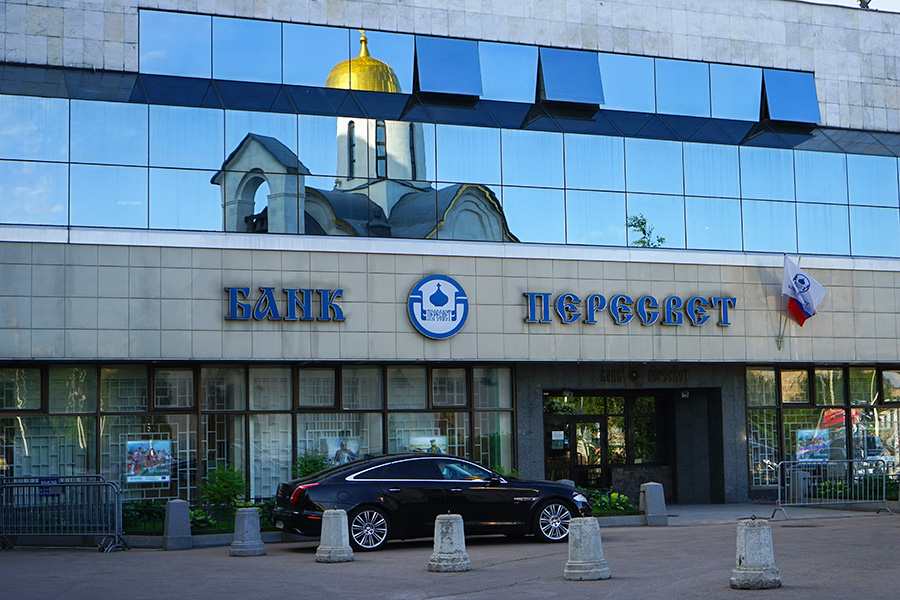 As follows from the claim that the interim administration “Peresvet” believes that the forced sale of the securities (according to a source close to one of the parties to the transaction, promissory notes were revalued to 1% of their nominal value, to sell them on the market Alfa Bank failed) below their market value, the Bank suffered damage in the amount of 4.71 billion RUB. in addition, as indicated in the statement of claim, forcibly fulfilling a forward contract, alpha Bank was aware of the appointment in Peresvet temporary administration and moratorium. Action of Alfa-Bank, according to representatives of the “Peresvet”, and contrary to the terms of the moratorium and the law “On bankruptcy”, according to which the introduction of a moratorium, the Bank creditor may not impose fines or to impose financial sanctions against the debtor has not performed its obligations. As a result of this assessment of the situation, the interim administration “Peresvet” in addition to compensation received loss from the sale of securities (4.7 billion rubles) demands to return him and even charged a Deposit (RUB 5.6 billion). The Bank also intends to recover from alpha-Bank interest for the use of its funds in the amount of 171 million RUB together all these requirements, Alfa Bank just make up the claim amount to 10.5 billion rubles.

Alfa-Bank declined to comment, saying he was not ready to discuss the claim of “overexposure” to the beginning of the trial. However, as said the official representative of the Bank, the transaction was conducted on market terms and complies with all current legislation. The Bank of Russia said they would not comment on the existing credit institution.

Given that so far the actions of the counterparties of the Bank under moratorium on satisfaction of creditors ‘ claims was not disputed, the lawyers interviewed ambiguous about the chances of “overexposure” to win in this dispute. “Violation of the moratorium, which aims to ensure the safety of future bankruptcy estate and to prevent the deterioration of the financial condition of the Bank”, — said the partner of the legal company Orient Partners Ilya Fedotov. “However, to prove in court that due to the sale of securities Peresvet has suffered a loss, it will be difficult, since it technically bills of credit were property of Alfa Bank. The “overexposure” was the obligation to redeem the paper, so the actions of Alfa-Bank has actually led to a decrease in Bank liabilities, but not to the loss of assets”, — the partner of lawyer Bureau A2 Mikhail Alexandrov. The situation with charged a Deposit, in his opinion, it’s easier. “The stay in the bankruptcy of banks extends to the debtor’s assets. Under this definition, and subject to the deposits that are hosted in other organizations. Therefore, the “Peresvet” could prove in court the fact of illegal repossession of their property,” the lawyer explained.

However, even if the grounds of the violation of the Central Bank introduced moratorium “closest distance” will not be able to challenge the actions of Alfa-Bank, the Central Bank can try to do it again if his rehabilitation does not happen, and after Bank license revocation will go into bankruptcy. “The law “On bankruptcy”, in particular, the possibility of the liquidator to challenge the transaction, which resulted in the Bank suffered losses. In particular, this concerns the so-called suspicious transactions, when the conditions differ from the market for the worse for the debtor side,” said Fedotov.

This dispute is important not only for the participants but for the entire market, adds the Treasurer of the Bank from the top 10. According to him, depending on his permission in question may be the use in Russia of the liquidation procedure, netting (netting of obligations under the counter transactions in case of bankruptcy of one or both parties to the transaction), for the introduction of which the market fought over ten years. “It was introduced, in particular, to unfair participants of the market could not challenge execution of REPO transactions or transactions with derivative financial instruments. The trial about the legality of forced execution of Alfa-Bank forward contracts with the “Peresvet” can have a negative impact on trust to each other and participants of the derivatives market and REPO” — fears the banker.