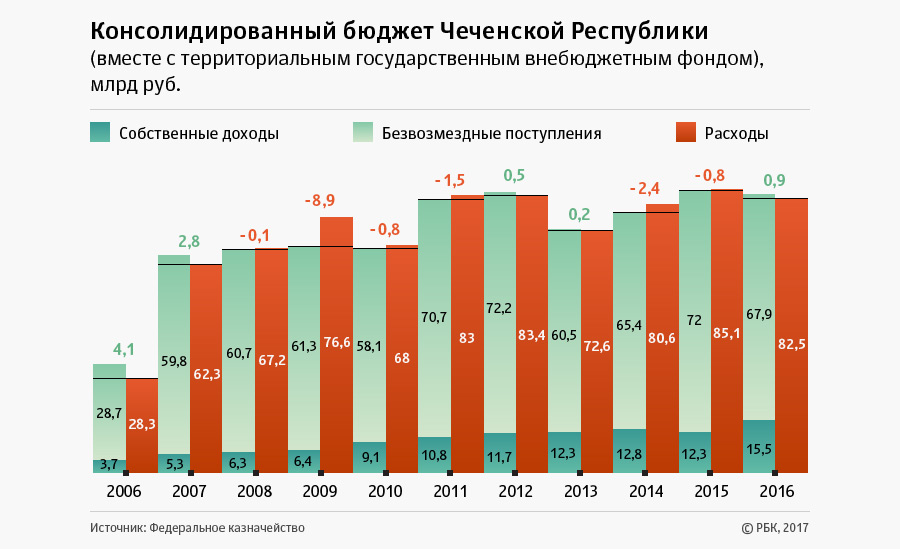 In November 2016, during the procedure of approval of the Federal budget, Ramzan Kadyrov, has spoken out against the proposals of the Ministry of Finance to cut the budget of the Chechen Republic. “If and further will continue the practice of budget cuts, the Republic will not be able to develop, we will not be able to fulfill their social obligations”, — Kadyrov said at the meeting, where the leadership of the Republic discussed issues of formation of the Chechen budget by 2017. In the end, the government decided that in 2017 Chechnya will receive almost as much, and in 2016 — RUR 40.4 bn. 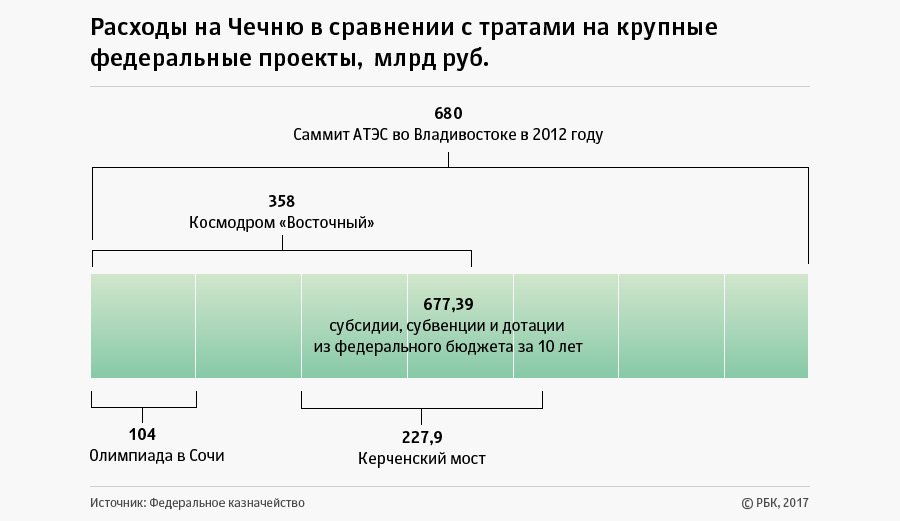 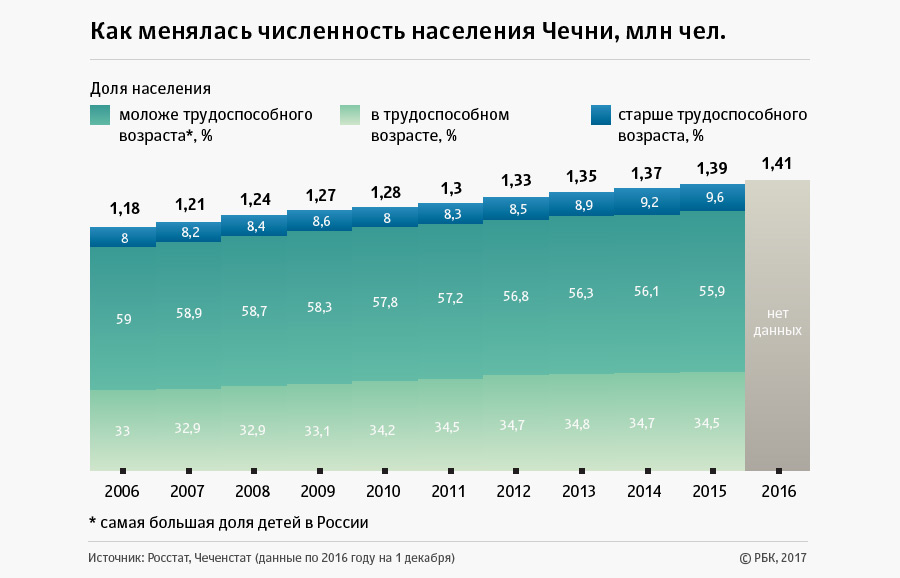 The Kadyrov’s 10 children. 4 Oct 2016 was held in Grozny fighting tournament Grand Prix Akhmat 2016, which took part including three sons of the head of Chechnya-Akhmad, nine-year-old Zelimkhan and eight-year-old Adam. Children’s participation in the tournament has criticized the President of the Union of the mixed single combats of MMA of Russia Fedor Emelyanenko and the President of the International Association of the mixed single combats (WMMAA) Vadim Finkelstein. The children’s Ombudsman of Chechnya Khamzat Khirakhmatov said that violations of children’s fighting has not been revealed. The Ministry of sports of Russia promised to investigate the matter.

For 8 years — from 2008 to the beginning of 2016 — Chechnya, according to Rosstat and Chechentara, left about 150 thousand people. Peak exit occurred in 2011-2013. The following two years, the number of travelers stayed at the same level, but from Chechnya are still more leaving than coming. In addition, over the past two years increased the number of people leaving abroad, while the number of departures in Russia declined. 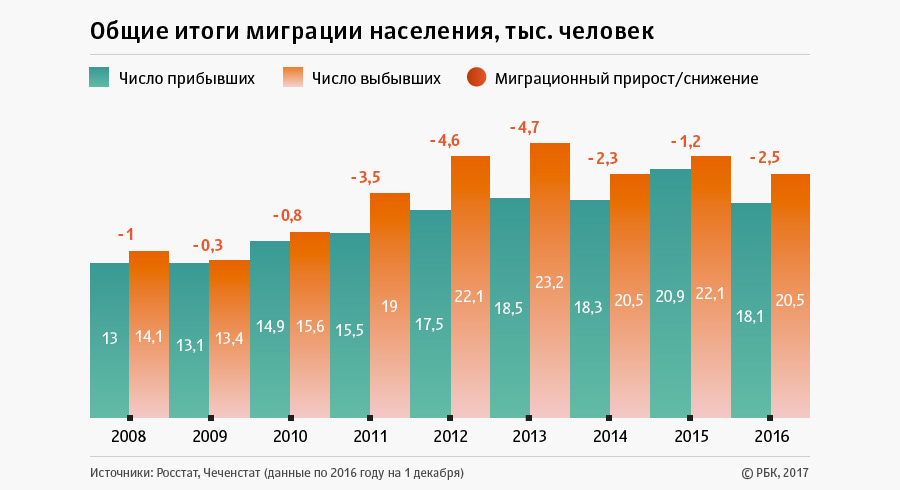 In Chechnya, it registers a very few crimes. In 2016, the Prosecutor General’s office reported about registration of the 3.7 million crimes — less only seven sparsely populated regions of Russia. The Republic occupies the 78th place in terms of criminality.

At the same time the number of registered crimes per capita Chechnya is in last place in Russia in 2016, the Prosecutor General’s office received information of 2.67 crimes per 1,000 people. For comparison, in Moscow this indicator is equal to 14.1, and the region-“the champion” on this indicator was of Tyva, where 1,000 people had 34,58 crimes.

In April 2016 a resident of the village of Kenkhi Ramazan Zalaldinov sent a video message to President Putin. In it, he complained about the delay of salaries of local teachers, and showed extensive damage in the village. He said that the village of Kenkhi is in a dilapidated condition after the war and floods. Zalaldinov claimed that complaints to the local authorities don’t lead anywhere.

In early may, the “Caucasian knot” reported that in Kenkhi came Kadyrov. The edition with reference to eyewitnesses wrote that he instructed for three months to repair roads and tower systems, conduct gas and to build mosques in the area.

The newspaper noted that in Kenkhi to Kadyrov tried to speak a few people are ready to confirm the words Zalaldinov, but was not allowed to meet, and then talked to them a senior police officer sharoyskogo district. May 12 the Dagestan edition “Chernovik” reported the burning of the house Zalaldinov. Kadyrov is the fact that arson denied, stating that thus “Zalaldinov this campaign is trying to open a door to Europe.”

Unemployment rate by the end of 2016 Chechnya came in second place, losing only to Ingushetia. The last time the first place in Russia (15,7%, 99,5 thousand) Chechnya was at the end of 2014. 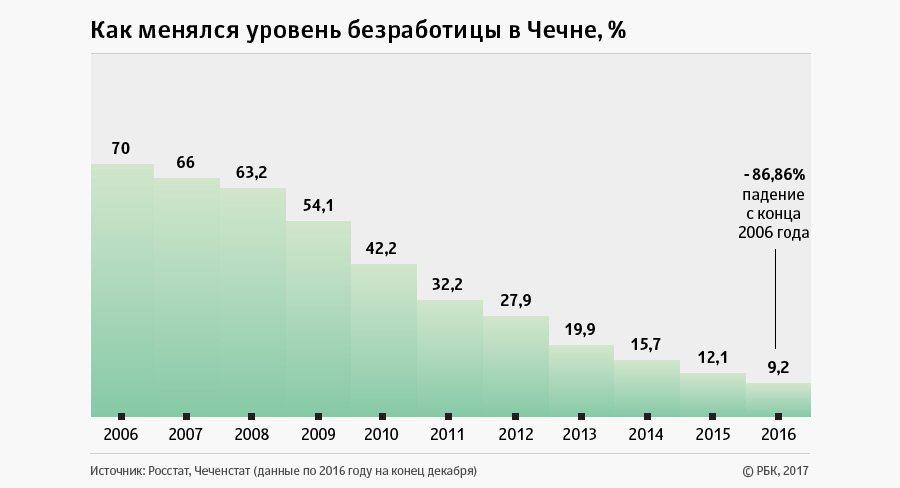 Kadyrov is an active user of social networks. His account in Instagram has become a platform for debate and political decisions. Now Kadyrov has nearly 2.5 million subscribers. For this indicator, the head of Chechnya is second only to Prime Minister Dmitry Medvedev (2.6 million), but insignificantly.