Still, the Treasury was not a party to the foreign exchange market. The question of granting it this status is now being discussed in the financial-economic bloc of the government, said several panelists. It is assumed that it will perform the function of agent of the Ministry of Finance for foreign exchange transactions in the budgetary rules for the replenishment of the Reserve Fund, replacing in this role the Central Bank.

According to sources , in the early years stages of transfer of trading functions from the Central Bank to the Treasury was spelled out in the corresponding “road map” of the latter. This document envisages a period of transition, which will create the necessary regulatory framework, IT-infrastructure, well-functioning trading operations within the Treasury. As noted by one of the panellists, the process of transfer of trading functions the Treasury may take about six months.

The operation of the Ministry of Finance currency interventions on the domestic market started in February this year, under the transitional provisions of the budget rules. When the excess of oil prices above the budgeted $40 per barrel, the Ministry of Finance buys foreign currency in the amount of the windfall, and if they fall below this mark currency markets. Physically the purchase of foreign currency realized by the Central Bank. She later transferred to the accounts of the Federal Treasury.

The target for inflation

Market participants believe that a key goal discussed replacing the Central Bank Treasury as a Treasury agent on its currency interventions of the Central Bank to distance themselves from these operations. “The desire of the Central Bank is quite clear: because the course on inflation targeting involves free floating of the ruble,” — says chief economist of “Renaissance Capital” in Russia and the CIS Oleg Kuzmin. Agrees with him and the head of the dealing center, head of foreign exchange and money market Metallinvestbank Sergey Romanchuk. “In my opinion, this step aimed at distancing the Bank from these purchases, as participation in them has a negative psychological effect,” he says. An important component of inflation targeting is the confidence of the regulator in the management of inflation, said the analyst. 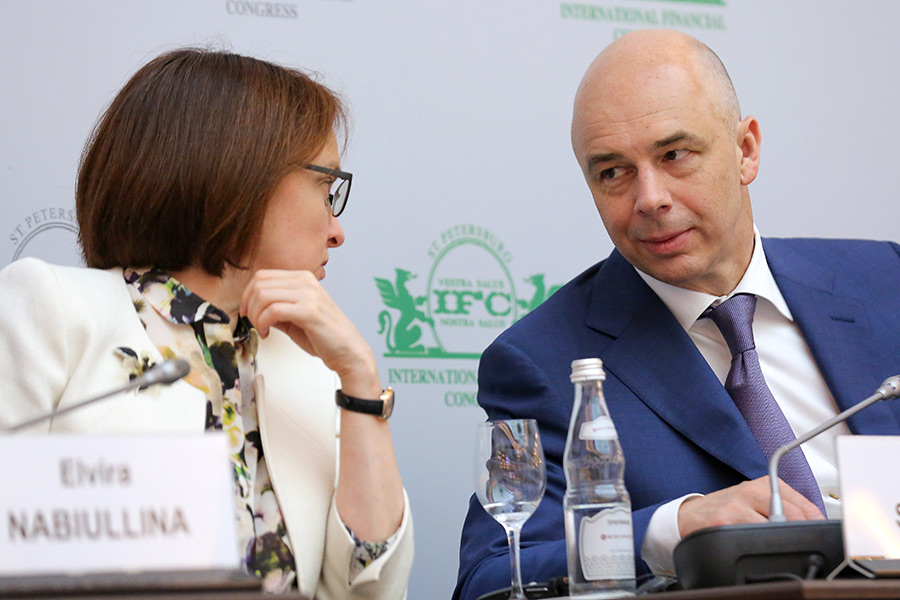 The Bank also has repeatedly stressed that it is only the agent of the Ministry of Finance according operations. In February, Central Bank head Elvira Nabiullina noted that the foreign exchange operations “should not be viewed as currency intervention to influence the nominal exchange rate of the ruble.” “It is not their purpose, and we believe this and we will continue to follow the policy of floating exchange rate,” Nabiullina explained (quoted by “Interfax”).

In the medium term, the Central Bank has reason to distance himself from the influence on the exchange rate. According to analysts, in the future, interventions will have more impact on the course. “We are already in April-may will see the dollar in the amount of RUB 63-64, if the oil is at current levels because the current account balance will be reduced and interventions will accumulate” — says the analyst of Raiffeisenbank Denis Poryvai.

The question is not technical

Market participants have different assessments of risks of the proposed innovations, but all are inclined to think that much will depend on how accurately the practice will operate the Treasury in its new state.

Greatest doubts about the feasibility of reform of the interviewed experts expressed the chief economist of the company “PF Capital” Evgenie Nadorshin. “First, in contrast to the Central Bank the Treasury has no experience and knowledge of such operations, and the sloppy approach is fraught with higher volatility of the ruble. Secondly, when operations in the foreign exchange market is carried out at two departments (of the Central Bank, and Treasury — Ministry of Finance), these actions are more difficult to balance,” he says. “In the worst case we cannot exclude conflict of interest at the Ministry of Finance between the stability of the ruble and the purpose of replenishment of the budget in which interests of a weaker ruble, which is, however, best not all subjects of economy”, — concluded the Nadorshin. The fact that the Central Bank independent from the Ministry of Finance and Treasury, which it is proposed to transfer the right to intervention controlled by the Ministry.

The existence of a risk of some increase in ruble volatility in the transmission of intervention from the Central Bank to the Treasury specifies and Oleg Kuzmin. “Cessation interventions may borrow from the Treasury for a few hours more time just due to the fact that the Ministry of Finance and the Central Bank will need to coordinate the positions and the lag in the event of a serious shock in the foreign exchange market may be important,” he says.

Director for analysis of financial markets and macroeconomics “Alfa-Capital” Vladimir Bragin sees not only disadvantages but also advantages. He agreed to the risks of the conflict of interests of the Ministry of Finance, but considers that, if the Treasury will intervene wisely, this risk can be offset. Among the pros he calls what when buying foreign currency Treasury does not occur the issuance of rubles. “Therefore, the participation of the Central Bank in this process is optional,” says Bragin. In General, he believes this idea is quite reasonable.

With careful approach, if limited to a mirror transfer of the current scheme of foreign exchange transactions increase the volatility of the ruble can be avoided: the change agent of the Ministry of Finance must exert short term influence on the course, points out Sergey Romanchuk. The main risk he sees that are extremely sensitive to inside the market may reach a new player. “It is important to exclude the possibility of leakage of information, insight, operational errors,” — said Romanchuk.