The Ukrainian oligarch Dmitry Firtash earned status on mediation in Russian gas supplies to Ukraine, may be extradited from Austria to the USA, where he is accused of corruption-related crimes. This unexpected decision issued today, the Vienna court. After the verdict, the businessman was about to leave the courthouse, but was taken into custody on another matter: he is suspected of money laundering in Spain.

For Dmitry Firtash today’s meeting of the Supreme land court of Vienna has resulted in a dramatic change. He arrived at the courthouse along with his wife Lada, was in a good mood, smiling and joking with reporters. A few hours later he was again threatened with extradition to the US on criminal charges 2013. But he was detained on another matter: in the end of 2016, the Spanish authorities put Firtash on the international wanted list on suspicion of money laundering.

The Vienna court considered the appeal of the Austrian Prosecutor’s office on behalf of the US authorities on the decision of a lower court to refuse extradition of Firtash. The businessman was arrested in Austria in March 2014 on request of the FBI. In April 2015, the Austrian lower court saw a possible “political motivation” in the U.S. on the extradition of Firtash. The arrest of an influential Ukrainian businessman, who was considered Pro-Russian, occurred a few weeks after the revolution in Kiev and the overthrow of Viktor Yanukovych, and the judge considered that the purpose of detention was “not to give Firtash to prevent the political interests of the United States”, “remove it from the Ukrainian policy”.

Canceling the previous verdict, judge Leo Lineic-Ivanski on Tuesday, February 21, explained that Austria is linked by a bilateral extradition agreement with the United States and should participate in international cooperation to combat cross-border corruption. The court thereby makes a judgment about the guilt or innocence Firtash, said Lineic-Ivanski, but leaves for another country (USA) right to determine the guilty or innocent suspect.

Firtash was previously asked the Austrian constitutional court to recognize the extradition agreement with the United States unconstitutional, but in August 2016 the court refused. In these three years, Firtash is in Austria, in fact, the status can not travel abroad, fearing that in any country, including his native Ukraine, he may detain and send to US. 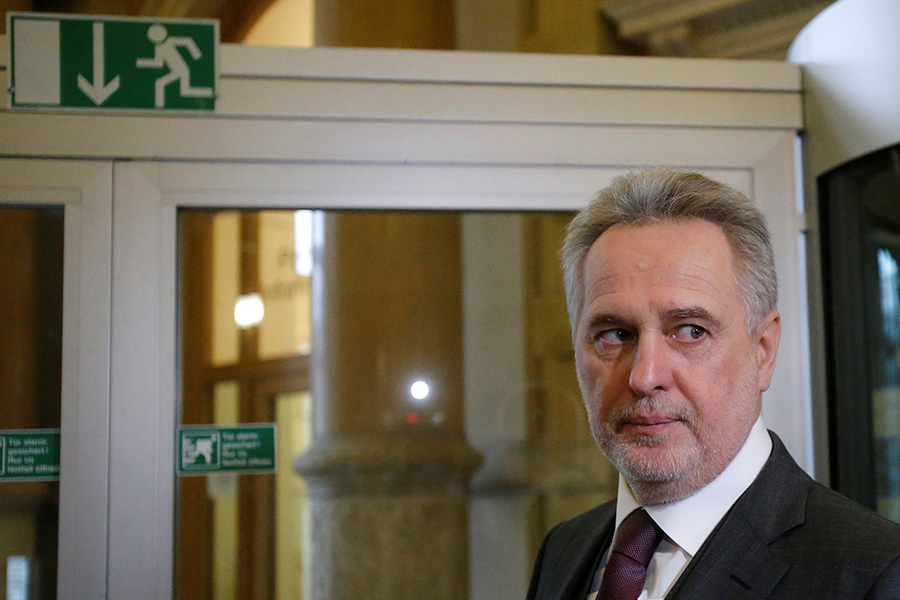 Today’s decision is not subject to appeal. The final decision to extradite Firtash in the USA must now take personally the Minister of justice of Austria, Brandstetter, reports the Austrian newspaper Kurier with reference to the Chairman of the judicial Board of Livnica-Ivanski.

The Austrian representative of Firtash Daniel Kapp redirected questions to the lawyers of the businessman, the law firm B&S Böhmdorfer Schender Rechtsanwälte has not responded to the request. The press service of the Ministry of justice of Austria also did not answer.

When Firtash, accompanied by relatives and lawyers were about to leave the courthouse, he was unexpectedly detained. As explained to journalists the representative of the Vienna Prosecutor’s office, the arrest is not formally associated with the decision to extradite to the US and based on the request of the Spanish authorities. In November 2016, the court of Barcelona has issued a European warrant for the arrest of Firtash wrote Spanish newspaper El Pais, a businessman accused of “close ties with organized crime and the laundering of €10 million, presumably of criminal origin”.

According to Spanish media reports, Firtash could be involved in the money laundering scheme through real estate investment in Spain (in the same case, the Spanish police in July 2016 arrested Ukrainian Stepan Chernovetsky, son of the infamous ex-mayor of Kiev Leonid Chernovetsky).

The Prosecutor’s office of Vienna by the evening of Tuesday failed to clarify, as a Spanish warrant for Firtash’s arrest will affect the decision-making procedure for his extradition to the United States.

What Firtash is accused in the United States?

The indictment against Firtash in the United States was drafted in 2013 but only made public in April 2014, two weeks after the annexation of Crimea to Russia. According to the investigation, since 2006, “criminal group” headed by Firtash paid at least $18.5 million in bribes to obtain licenses for the extraction of titanium raw materials in the Indian state of Andhra Pradesh. Titan had planned to deliver American aircraft Corporation Boeing (the deal ultimately did not take place). Although we are talking about the Indian project of a Ukrainian citizen, the United States used the Law against corrupt practices abroad (FCPA), which has extraterritorial effect. For its application to the American authorities, it is sufficient to have at least some connection with the jurisdiction of the United States.

In this case, according to the charges, Firtash and his alleged accomplices used the American banks for the implementation of corrupt remittances. Negotiations were involved a U.S. Corporation, and “criminal activity” committed including the United States. For example, the indictment specifically provides that members of the conspiracy used the Internet accounts and email stored on servers in the United States, and conducted telephone conversations in American cellular networks.

Austrian lawyer Firtash Dieter Bohmdorfer before the verdict on Tuesday reiterated that the United States in this case is driven by the political interests of Firtash allegedly was the victim of a us strategy to minimize Russian influence in Ukraine. 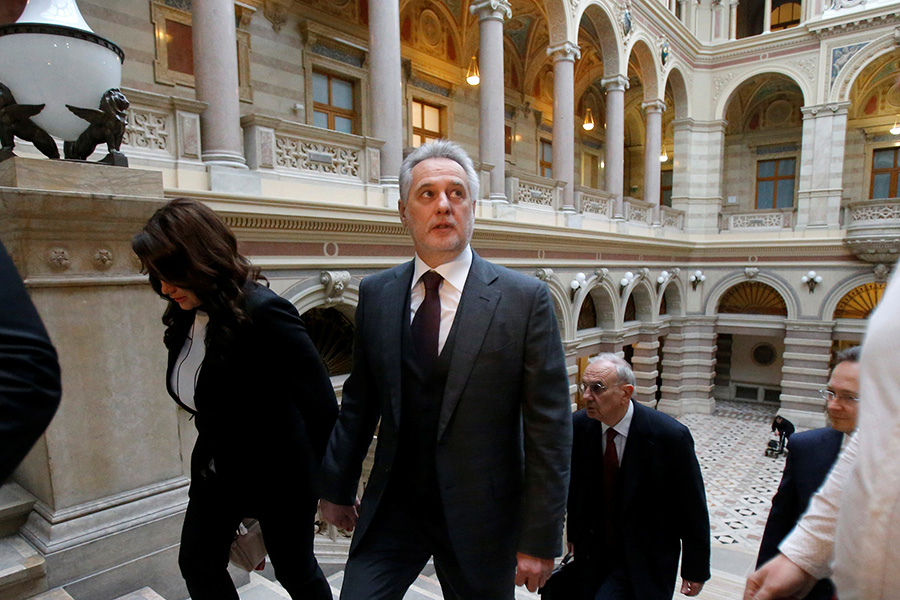 From the beginning, when Firtash was arrested in Austria, the American media put forward the version that the oligarch would want the American authorities as a potential informer, owns some “secrets” of the Kremlin. This speculation was based on the fact that for several years the Swiss trader RosUkrEnergo, which is jointly owned by Firtash and Gazprom, the Russian gas sold to Ukraine.

In November 2014, Reuters published an investigation which argued that in 2011-2014 “Gazprom” has sold to structures of Firtash more than 20 billion cubic meters of gas at below-market prices, while Gazprombank shortly after coming to power in Ukraine, Yanukovych, Firtash, which then supported, began to issue the company Firtash loans and by March 2011 they opened a credit line worth up to $11 billion. the Bank then told Reuters that the sum of the selected loans were at times less than $11 billion; on Tuesday, the press service of Gazprombank did not respond to a request .

According to estimates, which led to Reuters, Gazprom could be short of $2 billion due to sales of the company Firtash gas cheaper than bought “Naftogaz of Ukraine”. The representative of “Gazprom” on Tuesday declined to comment.

Press Secretary of the President of Russia Dmitry Peskov said that the decision of the court on Firtash in the Kremlin “found out”. In 2014, Sands told Reuters that Vladimir Putin has met Firtash but their acquaintance can not be called friends. Peskov also said that Gazprom supplied gas to Ukraine at lower prices, because it was requested by Yanukovych, Firtash and intermediation corresponded to the requests of the Ukrainian government.

Firtash himself claims that he never talked with Putin personally on the subject of Ukrainian gas deals. “I saw him, of course, but we’ve never met,” — said Firtash BloombergBusinessweek magazine in February 2017.

In March 2014, Firtash was released from custody on bail of €125 million Loan for this he gave a Russian billionaire, the owner of developer company Coalco Vasily Anisimov, who confirmed this to news Agency Reuters, but was called “purely business transaction”.

As Firtash is associated with Donald trump?

The American media is associated with Firtash, former Chairman of the election campaign Donald trump Paul Manafort, who resigned in August 2016, after the appearance of the questions to his activities in Ukraine. Working as a political consultant, Manafort helped Yanukovych in 2010 to win the presidential election, lobbied the interests of the Party of regions abroad, according to the New York Times, received for his services $13 million.

Former Prime Minister Yulia Tymoshenko in a lawsuit filed in the United States in 2011, talked about a joint project Firtash and Manafort in new York city (hotel and Mall), which, according to her statement, was meant for money laundering, including the concealment of the proceeds of the gas transactions in Ukraine. Subsequently, the U.S. Supreme court refused to hear the claim, arguing that the case is not in its jurisdiction.

Firtash and Manafort told Bloomberg that the project in new York was considered, but no agreements have been made and no money was invested.

With the participation of Polina Khimshiashvili George Makarenko, Marina Bozhko