Crimea and Sevastopol, where last September for the first time held elections to the state Duma, was among the regions with the most dysfunctional political situation for 2016. This is stated in the report of the experts Committee of civil initiatives (THD) Alexei Kudrin. The authors of the report is a Professor of Economics Nikolai Petrov, the HSE Professor Alexei Titkov, as well as political scientist Alexander Kynev.

In the study regions was estimated by the level of political competition (number of parties in addition to the “United Russia” actively supporting in the elections), the number of public protests and the level of socio-economic risks. The Crimea and Sevastopol got to the list of regions that are”losers”. According to the authors of the study, both subjects are at risk due to several factors: poor socio-economic situation, poor policy design and a large number of public protests. For the first time experts have tested these regions, taking into account all risk factors, said Petrov.

The Minister of internal policy of the Crimea Dmitry Polonsky said that the Republic is “the most stable and peaceful region in Russia with a completely clear, understandable system of government.” “The Crimean government has a tremendous level of trust from the population. And this is confirmed by numerous opinion polls,” he assured. Press Secretary of the Governor of Sevastopol Grigory Builov at the time of preparation of the material was not able to comment.

Except Crimea and Sevastopol disadvantaged experts called Yamalo-Nenets, Chukotka, Khanty-Mansi and Nenets Autonomous district and Jewish Autonomous district and Saint Petersburg. The most prosperous among the regions recognized as Adygea, Altai, Bashkortostan, Buryatia, Dagestan. In General the political situation has stabilized “below average” in comparison with the year 2015, experts have concluded.

In early 2016 the top ranks in the ranking of CHY last year it was occupied regions of the Central Federal district — Belgorod, Bryansk, Vladimir and Voronezh region. The biggest problems with the political situation then, according to experts, was in the Chukotka Autonomous district, Jewish Autonomous region, on Sakhalin and in Magadan.

The deterioration of the situation

According to experts, in 2016 the political situation in the regions as a whole have deteriorated. For example, decreased political competition: the average effective number of parties in the Duma elections and in the legislative assemblies of the regions for the year fell from 3.16 to 3.06. The level of protection of the rights of the parliamentary opposition (we are talking about the proportion of representatives of political parties except the “United Russia” positions of speaker, Vice-speakers and chairmen of committees of regional parliaments) fell from 14.1 to 11.3%. Assessment of local government decreased on average from 3.18 to 3.09 points on a scale.

In addition, regions become more protests compared to 2015. This, according to the report, may be associated with the Duma campaign in the first half of 2016, which provoked protests in many regions.

A large part of last year’s protests linked to elections in second place — the protests against transportation problems and actions triggered by violations of labor rights. The agenda of protests per year has changed significantly: in 2015, they are mainly connected with the decisions of the city authorities, the environment and social safeguards.

Substantially, compared to 2015 year — on-year increase in the number of protests related to humanitarian topics — freedom and censorship on the Internet (in conjunction with the discussion and adoption of the “Spring package”), domestic violence, ill-treatment of animals. 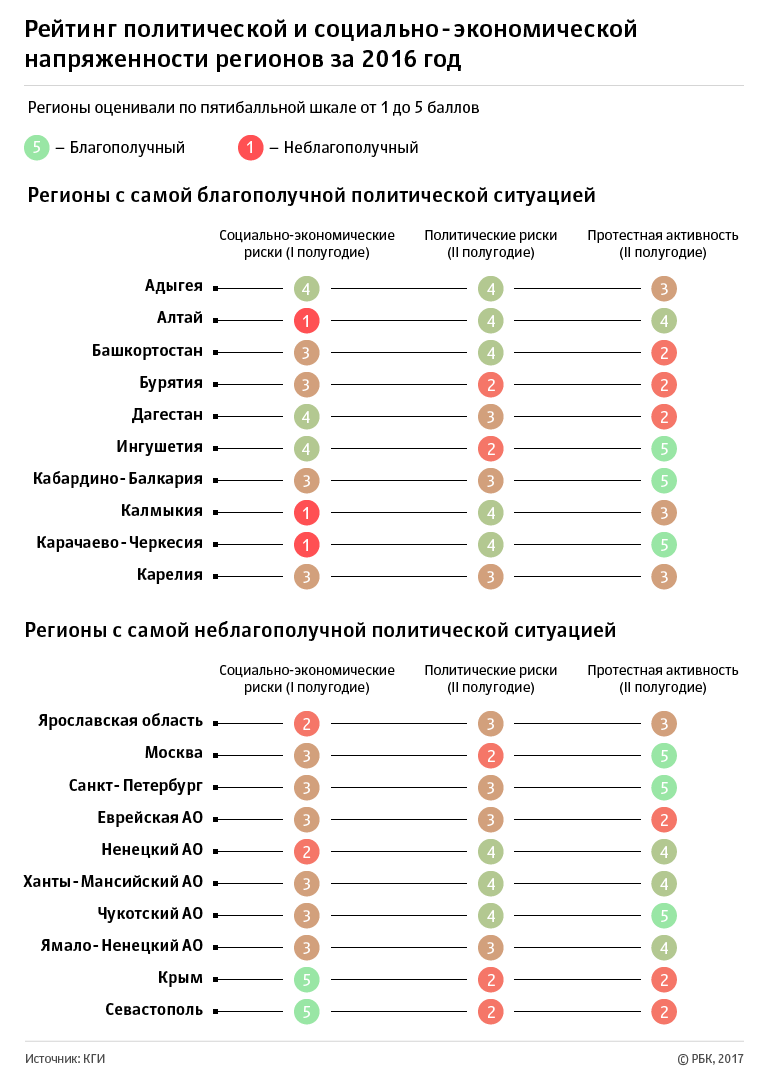 According to Petrov, the regions divided in the table of possible adverse political changes in the near future. “Crimea and Sevastopol are greatly suffering from growing pains, he explained. — There is, to some extent, there was quite a large replacement in the upper echelons, in one case due to elections in the Duma, another — because of the change of the Governor, therefore, administrative stability, they got the lowest score”. To expect that in the near future the situation in these regions change for the better, according to experts, it is not necessary.

Who is to blame

General deterioration of the political situation in the regions associated with the failed decisions of local authorities, experts say. The authors of the report speak negatively about the actions of the Federal authorities: in their view, in 2016, “the actions of the Centre in respect of the regions can be described as focused more on short-term and reactive in nature”.

Among these actions, high-profile arrests of the governors (we are talking about a criminal case against the Governor of Kirov region Nikita Belykh and the head of Komi Vyacheslav Gaizer). Among other problems, according to the OIG, the elimination of the Crimean Federal district and the replacement of the envoys in the North-West, North-Caucasian and Siberian Federal districts. All this, according to experts, could not affect the stability of the political system in the regions.

The political situation can be improved only one way — strengthening local self-government, said Petrov. “The risks that we evaluate, keeping in mind the current political situation, repeated efforts, when the country will shift from the status quo to the development, he added. — Therefore, the need to give regions to solve independently the problems they face”.

The expert suggested that the first step to this reform in some regions could be a return of elections of the mayor. “The election of governors is also necessary to return, and I think we are fast enough this will pass when we see that the appointment of people from the Center just because they are loyal, does not work” — said the expert.

Political analyst Nikolai Mironov believes that the main problem of regions of more — corrupt and connectivity to local power clans. “Therefore, the appointment of governors-“the Vikings”, all the people from the Federal government that are not associated with the [local] elites, must be the solution to their regional problems, is the right initiative,” he said .