The transfer of territory

3 Mar the head of the main operations Directorate of the Russian General staff Sergey rudskoy confirmed that a day earlier, “the Democratic forces of Syria” (SDF) combat units, consisting of Syrian Kurds and supporters of the moderate opposition, placed under the control of the government army of President Bashar al-Assad part of the liberated them from Islamic state terrorists (a terrorist organization banned in Russia), the territory West of the city Manuja, on the line of contact with the Turkish army.

“In accordance with the agreements reached with the participation of the command of the Russian forces in Syria, since March 3, to the territory occupied by Kurdish self-defense groups entered the armed forces of Syria,” said rudskoy (quoted by TASS). The first reports on the transfer of territory occurred on 2 March in the TV channel Al Jazeera. However, that day was denied by the Minister of foreign Affairs of Turkey Mevlut Cavusoglu. “The last days published such information, there are different news, speculation, which is untrue,” said the diplomat, commenting on the transfer of the Kurds to Syrians (quoted by TASS).

However, on 2 March, the military Council of the city of Manbij, which is controlled by SDF, confirmed the fact of transfer of the territories. “Force SDF agreed with Russia on the transfer of control of the units of the Syrian border troops of the territories and settlements to the West of Manuja on the frontline with the forces of the “Shield of the Euphrates” (the operation of the Turkish army. — ), — said in a statement. — This decision was taken in order to protect the civilian population Manuja and the surrounding area from Turkish aggression and occupation.” According to a statement by the SDF government troops tasked to protect the demarcation line between Kurdish forces and the “Free Syrian army” (FSA, one of the largest armed groups formed by the officers — deserters from the army cap. — ) supported by Turkey in the framework of the operation “shield of the Euphrates”.

The Turkish army last year, together with the FSA is conducting in the North of Syria operation “shield of the Euphrates”. The main declared goal of the operation — to ensure the safety of the Turkish border and clean up the border area in the North of the country from the militants and the Kurdish military units. Syrian authorities agreed to undertake a Turkey operation is not allowed.

“The Alliance between the Kurds and Pro-government forces is quite logical, — said the representative of the party of the Syrian Kurds “Democratic Union” Abdessalam Ali. The Kurds, unlike the Syrian opposition in the face of the Higher Committee on negotiations in Riyadh, not against the Syrian regime or Assad and do not seek to seize power in the country.” The goal of the Kurds — to seek the protection of the rights of the various components of Syrian society and minorities in the framework of the new Constitution, he said. The transfer of the territories shows that the Assad regime, despite all the problems associated with the creation of a Kurdish autonomy, interacts quite well with the Kurds, said Konstantin Truevtsev, senior researcher at the Centre for Arab and Islamic studies, Institute of Oriental studies. 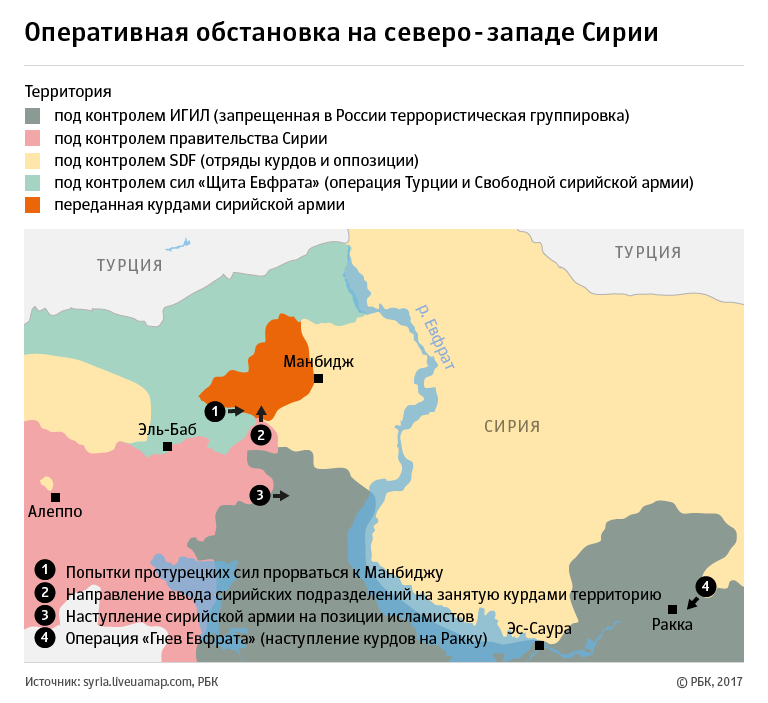 To protect the Kurds

Aside Manuja Turkish military moved once recaptured IG the city of al-Bab, which triggered clashes between them and Kurdish troops. Losing over the last few days some villages, the evening of March 2 Kurdish forces recaptured all lost ground. Witnesses reported that the Turkish army uses in the battle with the Kurds tanks “Leopard”.

The onset of Pro-Turkish forces on the position of the Kurds was the result of a deliberate policy of Ankara to create a “security zone” with a length of about 90 km along the southern border of Turkey. After in late February, the Syrian army completely cut off the Turks and their allies the road to Raqqa (“capital” is), Ankara has concentrated its efforts on the cleansing of the Kurds from territory in the West Bank of the Euphrates, with its center in the city Manbij, where going to organize their “safety zone” for the refugees. “Turkey is creating a buffer 90-kilometer zone. Ankara is trying to regain its presence there. Once Manbij will be taken, Turkey will stop its operations in Syria,” he promised, speaking on 27 February in Moscow, the adviser of the Turkish President Ilnur Cevik. Minister Cavusoglu also called “clear Manbij from the Kurdish self-defense forces”.

At the same time, Kurdish forces SDF are offensive in Raqqa from several directions in the framework of operation “Wrath of the Euphrates”. As Turkish “shield of the Euphrates”, it is supported by the United States. Now the operation is in the third phase insulation Raqqa by closing the road to Deir ez-Zor, deep into the controlled Islamists territories.

The hostile actions of Turkey put the Kurds on the brink of war on two fronts: the main forces of the Kurds are now involved in the operation to liberate Raqqa to fight against Islamic state terrorists on the one hand and to oppose the advance of the SAA and Turkish military on the other — is extremely difficult, said the representative of the party of the Syrian Kurds “Democratic Union” Abdessalam Ali. He recalled that between Russia and Turkey there is agreement on the prevention of clashes between the army loyal to Assad, and the forces of the “Shield of the Euphrates”, but if it will work to avoid them — is unknown, says Ali.

Long time operation of Turkey in Syria was beneficial for Moscow and Damascus, as the powerful “Shield of the Euphrates” fought with extremists in the North of the country and drew off part of the rebels from Aleppo, thereby facilitating the task of government forces and the Russian space forces for winning the city tells of Truevtsev. However, he is sure that Russia and Syria will not allow the Turks to recapture the territory the Kurds. Turkey in the face of opposition will have to abandon plans for the development of the offensive, the expert believes. Especially since, according to him, Ankara has managed to partially implement his plan to create a “security zone” in Northern Syria: in the area previously busy city Dzharablus was returned 50 thousand Syrian refugees stranded on Turkish territory, with plans to place 3.5 million refugees.

The talks will resume March 20

During the fourth round of inter-Syrian negotiations in Geneva, the participants of the meeting did not come to concrete agreements on political settlement in the country. The conference was attended by the delegation of official Damascus, the Syrian political opposition of the three platforms (Moscow, Cairo, Riyadh), as well as representatives of the armed opposition. Direct talks between the warring parties did not take place, bilateral consultations took place with the mediation of the UN.

Discussions, which began on 23 February, was devoted to procedural matters according to agreed work plan and format for upcoming meetings, which will discuss the future Constitution of Syria, the formation of a transitional government and holding elections. A new round of talks is scheduled for March 20.