Monday, March 6, held its first public hearings in the International court of justice (ICJ) on the claims of the Ukrainian authorities to the Russian government. The public part of the process in the Hague will conclude on Thursday, March 9. On 6 and 8 March, the judges will hear the representatives of Ukraine and 7 and may 9 — the Russian delegation.

What is he accused Russia

The claim of the Ukrainian party filed 16 Jan 2017. It was prepared by the Ministry of justice and Ministry of foreign Affairs. According to the notice of the International court of justice, Ukraine accuses Russia of violating two international conventions, the United Nations — to counter the financing of terrorism and on the elimination of all forms of racial discrimination.

Kiev believes that Russia violated a total of six of the 28 articles of the Convention on the financing of terrorism. Russia, according to the plaintiffs, providing material support to “terrorists” of the unrecognized Donetsk and Lugansk people’s republics, harboring their representatives on their territory, as well as directly or indirectly responsible for a number of terrorist acts on the territory of Ukraine (the crash of Boeing-777 flight MH17 in July 2014, the shelling of civilians in Volnovakha, and Kramatorsk, Mariupol, an explosion during a rally in Kharkiv).

Substantiating allegations of violations of the discrimination, plaintiff claims that the Russian authorities organized “persecution of non-Russian ethnic groups of the occupied Crimea”, in: the Tatars and Ukrainians. This is manifested, according to Kiev, in the banning of the Mejlis of the Crimean Tatar people, the suppression of Crimean Tatar and Ukrainian press, intimidation and abduction of activists. 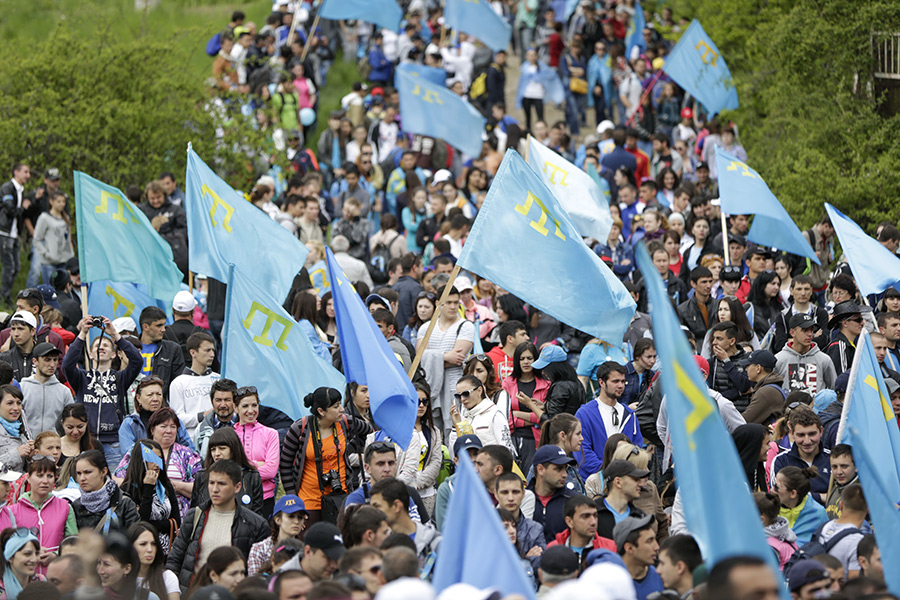 The plaintiff demands to oblige to stop this “persecution”, to restore the rights of Parliament, to investigate acts of violence against minorities, and to indemnify the victims of “the politics of cultural Stripping by discriminating” in the Crimea.

Kiev also wants the court by results of consideration of the case urged Russia to abandon any support of the separatists of Donbass, to take out all aimed there weapons to help the Ukrainian Prosecutor’s office in the investigation of the actions of “terrorists” and to fully indemnify against the consequences of terrorist attacks.

In addition, Kyiv demands to begin criminal prosecution of the Minister of defence of Russia Sergey Shoigu and leaders of the Duma opposition Gennady Zyuganov, Vladimir Zhirinovsky and Sergey Mironov as the likely sponsors of terrorism.

The Ukrainian side also asks the court during the pendency of the case to take against Russia “interim measures” — to introduce a judicial ban on the same actions against Kiev and submits a claim, that is, to forbid Russia to support the DNI and LC, to restore the Ukrainian control over the border, to abandon the oppression of the Tatars and Ukrainians in Crimea.

Russia denies all charges. “The Russian Federation has always strongly condemned any manifestations of terrorism and actively fights against it,” — said in a statement the foreign Ministry issued after the submission by Ukraine of the claim. The foreign Ministry also drew attention to the fact that Ukraine has not presented evidence that there are circumstances under the Convention; besides, the Kiev authorities are in talks with representatives of the DND and LNR, which it accuses of terrorism.

Moscow on the process is a group of experts headed by the Director of the legal Department of the Ministry of foreign Affairs Mr. Roman A. Kolodkin. In 2008-2010, he represented Russia in the ICJ on the “process of genocide of the Georgian people” after the conflict in South Ossetia. In 2010, the court refused to consider the claim of the Georgian authorities on the merits, as Russia proved that Tbilisi did not observe the procedure of pre-trial negotiations.

On Monday, representatives of the Ukrainian side drew the court’s attention to the need for the rapid introduction of “provisional measures”. Deputy Minister of foreign Affairs of Ukraine Olena zerkal, who headed the delegation from Kiev in the Hague, said: “in the face of threats faced by the Ukrainians, asking the court to make a decision on the application of provisional precautionary measures.” A lawyer from Yale University’s Harold Koh, who also represented the interests of Ukraine, stressed the need for “temporary measures”, as there is a risk of a repeat of the events against which the claim is made.

The imposition of time limits — it is normal practice for the international court of justice. It is similar to the measures of claim, to seek here the attempt of Kiev to quickly satisfy part of the claim is not necessary, said the lawyer, associate Professor, MGIMO Ilya Rachkov. According to Rachkov, the court shall issue a ruling on provisional measures usually within a few months, and sometimes even weeks or days after receipt of such petition from the plaintiff.

The beginning of the court hearings is not a guarantee that the process will reach a verdict on the merits because the parties may raise the issue of jurisdiction of the court. The consideration of this question, according to key words, takes about two years, and if the court decides that the dispute is not within its competence, the process is terminated and the temporary measures are removed.

If the court decides to continue the process, then the injunction remains until the decision on the merits. Continuing the process until the final decision also takes at least two years, said Rachkov. If the defendant is found guilty, the ICJ may take one of three decisions: restitution (returning to the situation prior to the violation), compensation (paying damages) or satisfaction (an apology and promises that the situation will not be repeated). As noted by Crustaceans, the international court usually leans toward the restitution, but not in all cases a return to the status quo possible. For example, in the case of Ukraine, this could mean the cancellation of the results of the Crimean referendum. “If Ukraine wins the case, the ICJ has no levers of enforcement decisions — stressed Crustaceans. — However, Kiev can complain to the UN security Council, which has the tools of pressure, with the voice of Russia in the discussion of this question will not be counted”.

What is the international court of justice

The international court of justice ICJ, the principal judicial organ of the UN located in the Hague. The court was established in June 1945. It replaced the Permanent court of international justice of the League of Nations. The court does not conduct its own investigation, provide evidence of the parties to the dispute. In the proceedings and decision of ICJ is guided by international conventions and treaties, international custom, General principles of law judicial decisions and doctrines of the most qualified experts on international law.

In the case of agreement between the parties to the dispute, the court may authorize the matter of “justice”, not limiting itself to existing rules of international law.

The case is in average of four years. Court decisions are not appealable but can be reviewed on the basis of newly discovered circumstances. In case of refusal of execution of a judgment of one party the other may file a complaint to the UN security Council.