Closer to the threat

Monday, March 6, the U.S. army beginning in South Korea are deploying missile defense THAAD. The first two units were delivered to the U.S. Osan air base near Seoul.

The plan for placing missile defense systems on the Korean Peninsula was approved three years ago, during the presidency of Barack Obama. The project start coincided with the testing of ballistic missiles by North Korea. On the night of 6 March, the Ministry of defense of South Korea recorded a launch of four missiles from a site in the North-West of the DPRK. Flying the entire Korean Peninsula to the East, they fell in the sea of Japan, and three of them — in the exclusive economic zone of Japan. Previous rocket tests Pyongyang conducted a month ago — just in time for the visit of the Japanese Prime Minister Shinzo Abe to the United States.

The statement said North Korean state Agency KCNA, the country conducted an exercise for launching ballistic missiles, “Hwaseong”, which was supervised personally by the head of state, Kim Jong-UN. As emphasized by the Agency, it was a response to annual military exercises the U.S. and South Korea, as well as statements by the President of the United States Donald trump about increasing the Pentagon’s budget and the need to strengthen the nuclear forces of America.

In turn, the statement said the Pacific command of the US army (USPACOM), nuclear and missile programs of the DPRK pose a threat to international security and violate many resolutions of the UN security Council. “In these circumstances, the deployment of the THAAD strengthens multi-tiered missile defense system and a defense Alliance between Washington and Seoul against the threat of the DPRK”, — explained in the message.

According to the commander of USPACOM, Admiral Harry Harris, given in the statement, Pyongyang’s actions “only confirm the appropriateness of decisions last year on the delivery of THAAD in South Korea.”

That Seoul is interested in THAAD and asked the US specifications, it became known in October 2013. Six months later, the Pentagon announced that is studying the potential installation of THAAD in South Korea. Finally, in July of 2016, Washington and Seoul agreed on the deployment of THAAD in the country “solely to counter nuclear and missile threats of North Korea”.

Base Osan is located 100 km from the inter-Korean border, and now the deployed systems are the most close to the DPRK of all American THAAD in the Pacific region (the United States has placed them on its territory Hawaii, GUAM, and Wake island).

What is THAAD system

Anti-missile complex THAAD is designed for high-altitude interception of ballistic missiles of average range. It works on the principle of “kinetic interception”, that is destroys the enemy missile purely mechanical action. The concept of THAAD began to be developed in 1987, since 1992, worked on a project for Lockheed, the serial production is established in 2008.

The radius of the missile itself is relatively small — about 200 km, i.e., THAAD hits the target on its decline; the maximum height of the missile launch is 150 km away. the accommodation consists of a radar, able to detect the launch of ballistic missiles at a distance up to 2 thousand km.

“Close the ring around Russia”

Regional allies of the United States welcomed the placement of missile defense systems in South Korea. “Specific details of the deployment of THAAD discussed between the US and South Korea. But in any case, the development of cooperation between the two countries contributes to peace and stability in the region. Our country supports it”, — stated in the message of the defense Ministry of Japan (quoted by TASS). 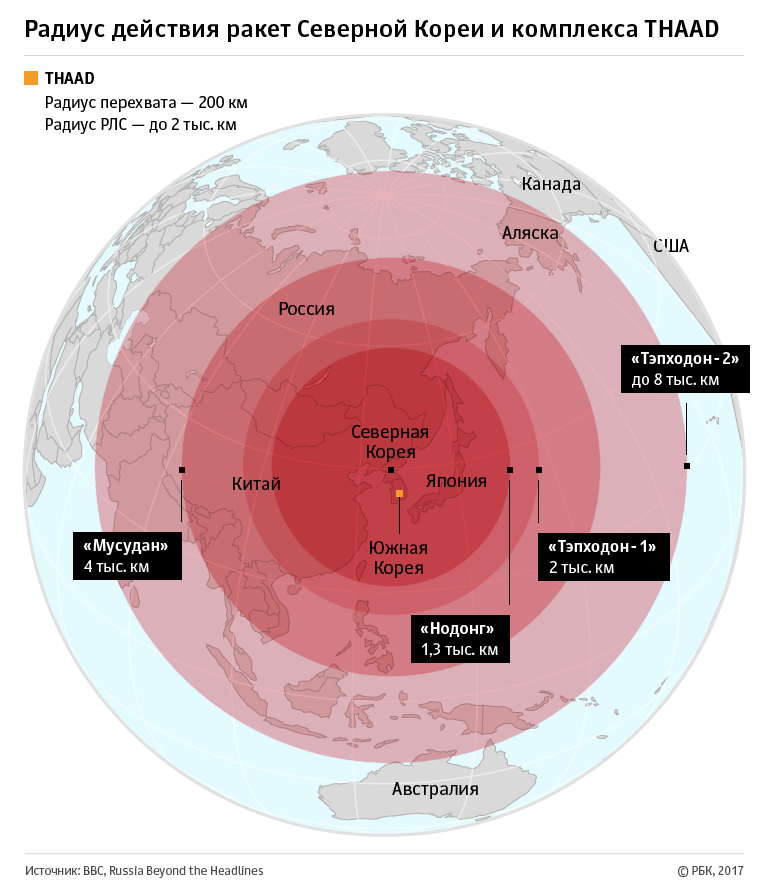 The press service of acting President of South Korea Hwang Geena Agency “Yonhap” reported that the head of state held a 20-minute phone conversation with Donald trump, in which they discussed the possibility of further strengthening cooperation between the two countries in the face of provocation of the DPRK. However, the parliamentary opposition Korea denounced the deployment of THAAD, calling it “unilateral and hasty decision.”

Most dramatically on the actions of the US responded to Beijing. At a daily briefing, foreign Ministry spokesman China Geng Shuang expressed “strong protest” against the deployment of THAAD and noted that Beijing “will take the necessary measures to protect national security”, and the possible consequences will fall on the shoulders of Washington and Seoul.

According to the government of South Korea, China has introduced a series of restrictive economic measures against Seoul. Last week the state media of China has called for a boycott of South Korean Corporation Lotte after the company’s decision to transfer its land for the deployment of THAAD.

These measures are intended to exert pressure on Seoul, although unlikely at this stage, it is possible to return the decision to place PRO ago, said head of the Centre of Russian strategy in Asia of the Institute of Economics Georgy Toloraya.

In Moscow also condemned the actions of the United States. The Russian foreign Ministry warned that the deployment of THAAD is fraught with tensions in the region. “This concerns not only with Pyongyang, but also a painful reaction of Beijing. All this leads to aggravation of the situation, and we certainly will take that into account in military planning”, — said the Director of the Department for nonproliferation and arms control of the foreign Ministry Mikhail Ulyanov.

The Chairman of the Federation Council Committee on defense and security Viktor Ozerov said that the deployment of American missile defense systems in South Korea — a violation of the military balance, recorded in the Russian-American Contract on reduction of offensive arms (SNV-3). According to the Senator, the steps the United States gives Moscow the right to withdraw from the contract. “The General staff will analyze, draw conclusions and present leadership of the country proposals for retaliation — said Ozerov. — Under the guise of the North Korean threat if they want to close the ring around Russia, then at least to impose it from the West and the East” (quoted by “RIA Novosti”).

In the state Duma the placement of THAAD journalists said the Chairman of the Committee on international Affairs Leonid Slutsky. He also believes that the steps of Washington to undermine the political and military balance in the region and indirectly aimed against Russia. “The only solution to the nuclear problem of the Korean Peninsula is the continuation of political and diplomatic efforts to bring the DPRK to the negotiating table, — said Slutsky. — However, the placement of US missile defense in South Korea clearly goes beyond the objectives of the deterrence of Pyongyang” (quoted by “Interfax”).

Protested for the company

A direct threat to Russia’s deployment of U.S. missile defense systems on the Korean Peninsula shall not be, though indirect or otherwise present, interviewed experts believe. Moscow’s dissatisfaction is due to the confidence of the Russian military in that the installation of THAAD in South Korea is part of the plan to establish the Asia Pacific missile defense system, complementary to the European, says George Toloraya from the wounds.

“The deployment of us missile defense is aimed at the strategic encirclement of China and Russia, and thus, these countries will have to take retaliatory measures”, — said Toloraya.

In fact, THAAD cannot intercept Russian missiles and nuclear weapon carriers; for Moscow, it is a matter of principle, whereas for Beijing is a real threat, said leading researcher, Institute of Far Eastern studies, Vasily Kashin.

A significant part of the Chinese nuclear potential is represented by a ballistic medium-range missiles that THAAD can intercept, Kashin explained: “In fact, the whole northeastern China will be viewed as a radar station of this complex because its range is about 2 thousand km.” In Beijing believe that the radar will threaten the Chinese nuclear deterrent capabilities of the United States — the already rather limited, says Colora.

On the other hand, much depends on the ultimate goal of deployment of missiles. Although the steps of Washington outraged the PRC, the real balance of forces in the region should not wait, said leading researcher of the Institute of Far East Russian Academy of Sciences Konstantin Asmolov. “Technically, the placement of THAAD is due to the North Korean map, but it’s actually American ABOUT the cover not even the objects of South Korea, and the objects of the American military infrastructure,” he said.

The representative of the Ministry of culture and tourism of South Korea said that on Thursday, March 2, Chinese officials gathered in Beijing representatives of tourism companies and advised them from 15 March to stop the sale of tours to South Korea. At least one Chinese travel company Tuniu, has already stopped the sale of tours, according to CNN. The economy of South Korea this will be a serious blow. Of the 17 million tourists who visited South Korea last year, 8 million were Chinese, estimated by CNN. Investors concerned about the escalation of the conflict and possible losses in the tourism sector. On Friday, March 3, shares of the largest South Korean duty-free retailers fell: Hotel Shilla — 15% Shinsegae — 5%.

Chinese foreign Ministry denies that the government has issued any instructions regarding restriction of trade with South Korea.

However, the South Korean government is considering the introduction of emergency economic measures, which should counteract the actions of Beijing. According to official statements, the Ministry of Commerce of the southern Korea intends to grant loans of 1 billion Korean won ($872,000) for small companies affected by the sanctions of China.

Bloomberg reported that the decreased number of Chinese tourists visiting located in South Korea music Museum The Play K-Pop. The official representative of the Museum told Bloomberg that the Museum is visited daily by about six or seven Chinese groups, and this week “is hardly at least one tour bus with Chinese tourists.”