The Decision Of Kiev

On March 15 the national security Council and defense of Ukraine completely stopped the transport rail and road connections with the uncontrolled Kiev territory of Donetsk and Lugansk regions. The Council meeting was attended by the President of Ukraine Petro Poroshenko, who supported the decision of the NSDC. The Minister of internal Affairs Arsen Avakov at the meeting noted that the transport blockade will not affect the personal vehicles of the Ukrainians, wishing to get on the uncontrolled territory, as well as humanitarian goods. “Sausage in the bags for the family” the interior Minister promised not to touch, stressing that it is only on the supply of any manufactured goods. However, even a passenger bus under the self-proclaimed DNR and LNR territory, will be subject to “special checks”, said the Advisor to the Minister Zoryan Shkiryak.

Poroshenko said that Ukraine was forced to impose the blockade in response to Russia’s actions, which recognized the documents of the so-called DND and LNR, and later there was a seizure of the Ukrainian enterprises, working in the legal field of Ukraine. “After the capture of these companies we can not have any trade relations with these “confiscated” by the companies. We will not allow any of their activities”, — said Poroshenko. In his opinion, these actions should be the basis for strengthening international sanctions against it. The blockade, he said, may be withdrawn when the company returned to the control of the Ukrainian owners. The decision on introduction of external management at the Ukrainian enterprises from March 1, took the head of the breakaway DND and LNR. Its decision they explained by the fact that previously Ukrainian radicals blocked rail traffic and delivery of goods from enterprises of the Ukraine became impossible. Russian officials have repeatedly stressed that Moscow has nothing to do with the decision of the heads of DND and LNR.

A source close to the leadership of one of the factions of the Ukrainian Parliament, said that official support of the national security Council — the solution to very formal. “Once an individual volunteer battalions and members of the introduced in February, the blockade, in the presidential administration actually closed her eyes, and the Ministry of defense of Ukraine gave a secret order not to interfere with the desire of the military to take a “vacation” and go to block the Donbass”, — he said.

Poroshenko at the meeting admitted that “our blockade will cost Ukraine a lot of money”. The account he promised to put not only self-proclaimed “Republicans”, but the party “Samopomich”, “Batkivschyna” and the other instigators and promoters of the blockade.

The price for Kiev

Ukraine’s losses in the trade balance will not exceed 5% of foreign exchange earnings, or about $150-170 million per month, said an analyst at Ukrainian investment company Concorde Capital Oleksandr Parashchiy. One of the interlocutors in the Ukrainian export market, said that in the year because of the blockade Ukraine will lose more than $3 billion For comparison: the fourth tranche of the IMF loan to Ukraine is $1 billion.

Prolonged continuation of the current situation with the blockade of railway lines in the Donbass will lead to the final rupture of chains of production and supply of finished products, said on 2 March, the head of the National Bank of Ukraine (NBU) Valeria Gontareva. Consequences of the continuation of the blockade of Donbass she called the decline of steel production, coke, electricity and other products.

“According to the most pessimistic scenario, the continuation of the blockade until the end of the year may slow economic growth [of Ukraine] is 1.3%, i.e. up to 1.5% in the current year”, — said Gontareva.

The radicals began to block roads in the beginning of the year, but the authorities did not interfere with them, for fear of retaliation, explained earlier, the Ukrainian experts. Upholding the decision of the blockade on Wednesday, Poroshenko came out of the situation a winner: it has strengthened its position and removed the internal political tension, says Ukrainian political analyst Vadim Karasev. On the acceptance by President of decisions influenced by the President, the national security Council Alexander Turchynov, the Minister Arsen Avakov. They showed the President that he cannot alone control the radicals, however, supporting the blockade, it intensified, I agree, another Ukrainian expert — Anatoly Artisyuk.

The main victim in this story yet — businessman Rinat Akhmetov. March 15, the SCM group (which includes DTEK and Metinvest) has announced a complete loss of control over their assets on the territory of the DNI and LC. As emphasized in the company SKM group has repeatedly stated that it considers it absolutely unacceptable requirement to re-register their enterprises and pay taxes to the self-proclaimed DND and LNR.

Akhmetov was not ready for such a development, said earlier the head of one of the enterprises of SCM group. According to the interlocutor of the edition, until the last moment there was hope that President Petro Poroshenko to resolve the situation with the trade blockade by the soldiers of the Ukrainian volunteer units and remove it. “For three years our businesses on the tubing string despite all the difficulties worked solely under the Ukrainian legislation, remaining a liaison between the controlled and uncontrolled territories of Ukraine”, — reads the statement of SCM.

Statement SKM — confirmation that the crisis caused the business Akhmetov powerful blow, his Empire in the Donbas came to an end, says expert Anatoly Artisyuk. Deprived of assets on the territories of the LC and the DNI, he is losing influence in Kiev, in the Donbass and Moscow, indicates Artisyuk. The influence of the Foundation decreased significantly, although he still has business in Ukraine, says Karasev. Before the decision on the introduction of external control and blockade remained “joint world” Akhmetov continued to profit from working in the Donbass enterprises, the workers in them were paid, Moscow had no problem with providing people in Donbass, says Ukrainian analyst Mikhail Pogrebinsky. As will now unfold the situation in the Donbass, according to him, is difficult to predict. We should not exclude that in the end all will be found the solution Akhmetov, Kiev, the self-proclaimed Republic and Moscow, drew attention Karasev.

What is lost Akhmetov

On the territories of the DNI and LC Rinat Akhmetov owned 47 enterprises. Key assets over which Akhmetov lost control, is a coal mine “Sverdlovantratsit”, “Rovenkianthracite” and “Komsomolets of Donbass” in 2016, the mine produced 9 million tons of coal is one-third of the total production of DTEK. “DTEK Vostokenergo” LLC owns three power plants with a total capacity of 4.2 GW: Zuevskaya, Kurakhovskaya in the Donetsk region and Luganskaya TPP. 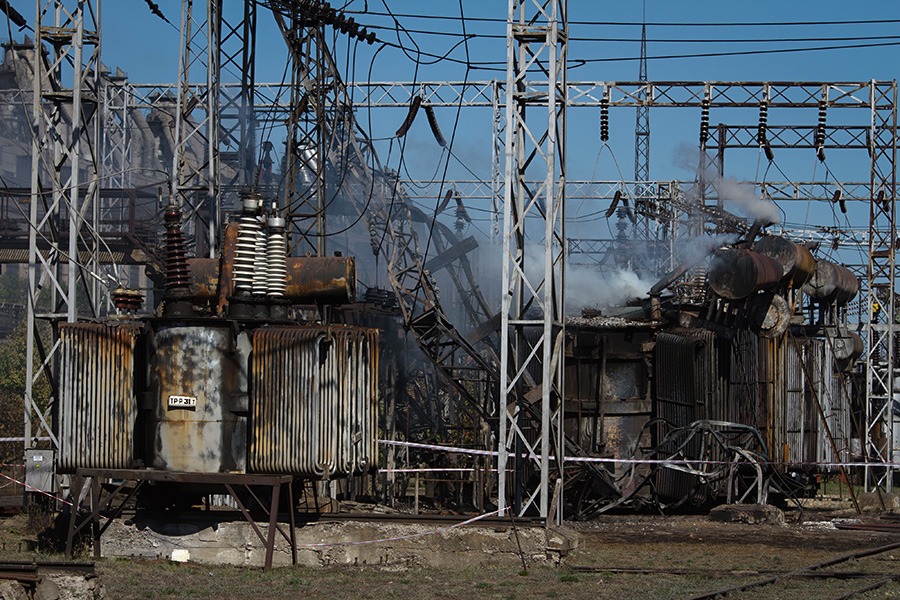 To evaluate this business difficult, as the holding company is non-public, say analysts “the Renaissance the Capital” and Societe Generale. In 2015 Forbes magazine estimated the state of Rinat Akhmetov $6.7 billion, and in 2016, $2.3 billion In the first half of 2016, revenue of the company amounted to $2.2 billion But the company suffered losses for the last three years, wrote to the Ukrainian Forbes. The holding also an impressive debt at the end of the year — more than $2.5 billion.

In a difficult credit history company has got due to the dependence on foreign currency loans: 60% of the debt was denominated in dollars, 20% in Euro, wrote Forbes. Should DTEK and the Ukrainian energy market of 1.4 billion hryvnia, but in 2016, the Ukrainian courts have retrocele the debt. Took over the management of the assets Akhmetov, new heads, most likely, will continue to supply coal to Ukrainian territory, the Director of the energy development Fund Sergey Pikin. You have two options: either will lift the blockade or mine will sell coal to Russia, speaking virtually traders, and then the coal would be resold to Ukraine, however, is more expensive, says the expert.

The main demand in Ukraine, agrees the senior analyst of “dragon Capital” Denis Sakwa. It is unlikely the new owners will earn a lot in the mines: coal production costs are quite high, concludes the analyst.

Donbass and Minsk agreement on the gap

The NSDC decision was made on the day of the next meeting of the contact group on Ukraine in Minsk. Both the Russian and the Ukrainian side at the meeting, they accused each other virtually in a complete breakdown in the negotiating process. The authorities in Kiev were “radical of the radicals themselves,” he told reporters Russia’s envoy to the group of Boris Gryzlov. “Against this background, there are fewer people able to believe that the Kiev authorities are seriously ready to implement the Minsk agreements”, — he said.

The decree of the President of Russia on the recognition of documents issued by the illegitimate authorities of certain regions of Donetsk and Lugansk regions, “raider seizure of state and private ownership of the uncontrolled part of Donbass” clearly readable by the world community and Ukraine as a violation of the Minsk agreements and leads to their breakdown,” he said in a Facebook press Secretary of the Ukrainian representative Leonid Kuchma Darka olifer.

According to the source close to diplomatic circles, none of the parties will not be solved by leaving the negotiating group. “But the situation is in “the clinch”, and a gap may occur at any time,” he says.

Mr. Poroshenko’s decision, the statement of Akhmetov’s companies show that concerns about the Donbass go to Russia, I am sure Ukrainian political analyst Vadim Karasev: Poroshenko skillfully took advantage of the situation, under the pretext of taking companies decided that actually absolve Kiev of any responsibility for the implementation of the Minsk agreements. Since the conclusion of the agreements in September 2014, it was clear that Ukraine can not meet them on their terms, but the first to declare that Kiev could not, otherwise I would have removed the sanctions against Russia, but Moscow made a mistake by agreeing to the recognition of passports and not opposing the nationalization of enterprises, Karasev explains.

Close to the Kremlin, political analyst Alexei Chesnakov believes that Ukraine is doing everything to tighten the Minsk talks. “Now Poroshenko can say whatever you want. The time lost. Further economic and political integration of Donbass and Russia becomes inevitable. Even if Kiev changes its mind and lift the blockade,” — said Chesnakov .

With the participation of Vladimir Dergacheva, Svetlana Burmistrova, Philip Aleksenko