“Innovation with a faster pace of socio-economic development that have shaped new standards of living of the population and created the best in the Russian business environment, where the main value is the man” and “all the efforts of the authorities aimed at improving the quality of life, create the best conditions for comprehensive and harmonious development of personality”. This utopian image of Crimea outlined in the Strategy for socio-economic development of the region up to 2030, which the local government adopted at the beginning of this year. The authors define it as the strategy of “Three victories” in the fight for human capital, for innovation and for the investor.

But for now, three years after the annexation of Crimea and Sevastopol to Russia, the standard of living on the Peninsula remains below the national average, infrastructure and equipment are worn out, investment in fixed capital is more than 40% consist of budgetary funds and local businessmen complain of inaccessibility of credits. “The youngest region of Russia” is facing a demographic threat: the population is aging and without migration is decreasing due to high mortality. Western sanctions, the end which is not visible yet isolated the region from external trade and foreign investment, and Ukraine imposed a transport and energy blockade of the Crimea and cut off from the Dnieper fresh water, which until 2014, was provided for 87% of the local needs. All this actually transformed Crimea into “island” from an economic point of view, noted in the analytical report 2015 (.pdf) Russian Fund “national energy security”.

The euphoria has passed, but people are happy

March 16, 2014 almost 97% of Crimeans participated in the referendum voted for joining Russia. Three years later, despite socio-economic difficulties, the vast majority of residents of Crimea and Sevastopol, in General, satisfied with the situation in the region, show the data of Fund “Public opinion” (FOM). In November 2016, 78% of the population of the Republic of Crimea and 74% of Sevastopol was satisfied with the situation in the region (although in December 2015, there were 86 and 80%, respectively), and 69% of Crimean residents (63% of Sevastopol) said that the situation is improving. 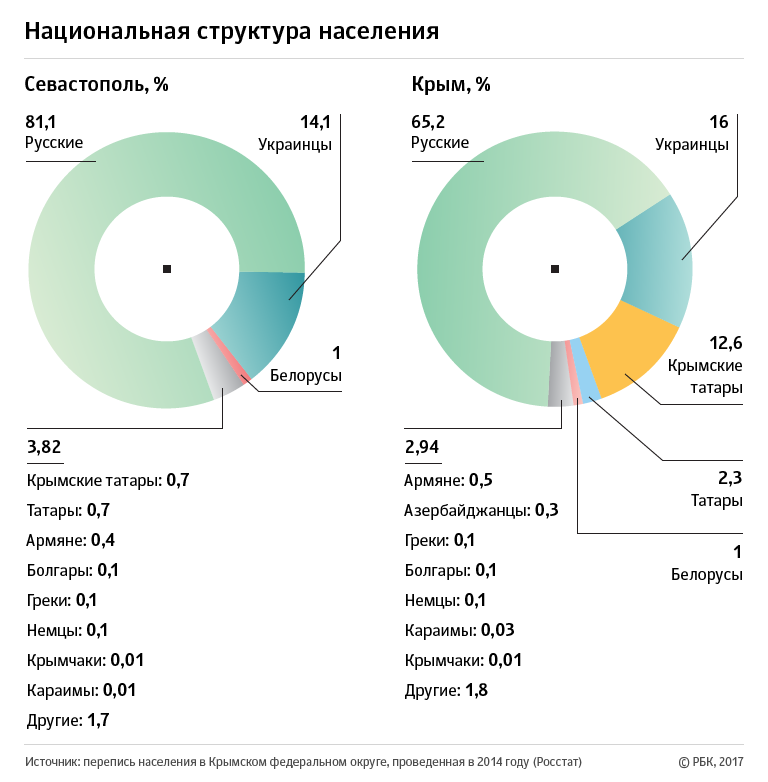 If you believe the sociologists Thomas, Crimean residents most concerned about is not rising prices, unemployment or low wages and traffic problems and traffic jams. In conversation with the correspondent of the locals complained about the high prices in stores, but the income of the Crimeans is growing at a fast pace, and inflation after 26% in 2015 (then the highest level among Russian regions) at the end of last year has slowed to 7%. For comparison, the per capita income in the country increased in 2016 by 21% compared to the previous year, to 19 thousand rubles. (preliminary Cristata).

Nevertheless, the increased incomes of the population in Crimea remains almost two times below the national average, if you focus on the latest available data from Rosstat for the year 2015. It is no coincidence that in the Crimea during the communication with the local pensioners have sounded the famous phrase of the Prime Minister Dmitry Medvedev: “Just no money now <…> You stay here, you all the best, good mood and health.” After that, in August 2016, President Vladimir Putin chastised the leaders of the Crimea and Sevastopol, that their priority is “constantly, systematically work to increase the incomes of Crimea and Sevastopol”.

If in comparison with other Russian regions of the Crimea can be estimated by objective statistical indicators as lagging, then the other, more politically sensitive question “was it better to live in the Crimea after joining Russia?” an impartial answer is no. The standard of living in Crimea “before” and “after” difficult to compare — even if revenues grow, it is impossible to tell what it means from the point of view of the consumer basket, indicates the Professor of the Department of Finance Higher school of Economics (HSE), Ivan Rodionov. Ukrainian economic indicators are not converted to the Russian data for analysis no, says the Director of the regional program of Independent Institute for social policy Natalya Zubarevich. According to statistics the economy of the Crimea is growing, but with it rising rates of Dagestan and Chechnya, which calls into question the accuracy of the data, she says.

lax tried to answer this question, assessing the purchasing power of average nominal wages in the Crimea in the Ukraine (2013) and after joining of the Russian Federation (2014-2016). 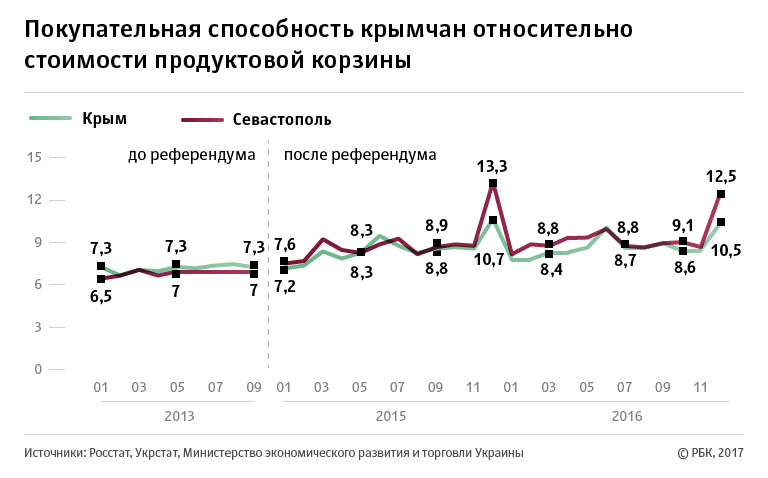 Comparable rates of Ukrainian statistics and Rosstat data found only on a narrow range of basic food products (21 product, see infographic). Weight products for that simple set was taken from the consumer basket for the subjects of the Russian Federation, approved by the government. As the purchasing power of the “Ukrainian” and “Russian” salaries in the Crimea was determined as the ratio of average wages to the cost of the same basket (a dimensionless index), the currency conversion was not required. It turned out that from this point of view, the Crimean people have become richer compared to the Ukrainian times: in 2013 the average salary you could buy a 7,0–7,5 such grocery “baskets” (to 7,1 in Sevastopol), in 2016, you could buy 9-10.

“Crimea began to live better” from the point of view of budget revenues and expenditures, said the Minister of Finance of the Republic Irina Kiviko that works in the tax and budget authorities of the Crimea from the 1990-ies. “What we inherited [from the Ukrainian], was in poor condition, nothing repaired since 1960-1970-ies, the money is not invested,” she says. — What we are doing these three years — massively re-equipping [logistics base], repair updated”.

Retail without the feds

In 2014, when the collapse of the old supply chain, on the Peninsula were notable shortages of provision of goods, but now the situation is normal. So, despite the sanctions, in the Crimea there is no shortage of consumer electronics. For example, smartphone shipments to the Peninsula legally go from Krasnodar, says a leading analyst of Mobile Research Group Eldar Murtazin.

Nevertheless, the Federal network in Crimea is to go no risk. Of all respondents retailers only Shoe Zenden is ready to develop in the Crimea, she now has two shops in Simferopol and plans to open another in Yalta. Light industry in the region are poorly represented, and shoes Zenden refers to the low price segment and fit in the financial possibilities of the Crimean people, said the representative of the company. There are in Simferopol and shop at Auchan. Three years ago the group decided to transfer it to the management of the Russian division to “retain 250 jobs and provide the population with products of first necessity”, said the representative of the retailer, however, to expand its presence on the Peninsula, the company does not intend to.

No plans to expand into Crimea “Dixie” — the press service of the retailer motivated by the fact that the region is not close to distribution centers. On the complexity of the logistics complain source to another retail chain, which is not going to work in the Crimea: to transport goods by plane is too expensive, and the ferry goes intermittently. In the end, large retailers are not able to fully guarantee the filling of the inventory of their stores, and this is too big a risk for the image, the source explained . Due to reputational risks, the representative of another major retail chain asked me to do not mention the name of the company in the context of the Crimea.

The maintenance or aggravation of the process of “depopulation”, the decline in life expectancy, increase of sickness among the population — this demographic threat are listed in the development Strategy of the Crimea until 2030. In addition, it is now of working age is the highest possible proportion of local residents — in the future it will be reduced in connection with the retirement of numerous age groups and joining the small working age generation, the document says.

Head of the laboratory for studies of demography and migration Ranepa Alla Mackenzie said that Crimea in this sense is similar to other regions of the southern Federal district and the whole Russia. Fertility decreases slightly, because now bears a reduced generation of mothers who themselves were born in the early 1990s. with the intensity of childbirth is all normal, deviations in mortality no, she says. “In 2016 in the Crimea was born 23 thousand people (96% of the level-2015), died almost 29 thousand In Sevastopol was born 5.5 thousand people (98,9%) died 5.8 million Is a normal figure. I don’t think that after 2014 the demographic trends in Crimea have changed globally,” said Mackenzie.

Crime on paper is reduced 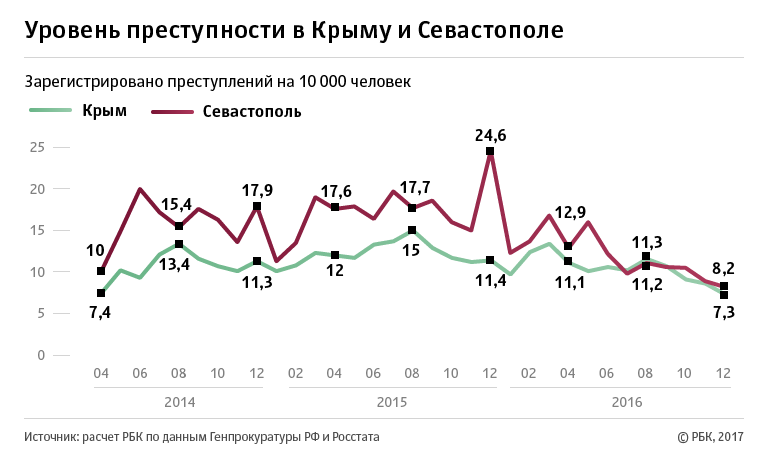 As calculated on the basis of data of Rosstat and the Prosecutor General, the crime rate in the Republic of Crimea in 2016 made up of 124.5 crimes per 10 thousand people, in Sevastopol — 137 per 10 thousand people. The indicators below the median (141). According to official data, in 2016 the crime fell sharply compared to the year 2015. Three years after returning to Russia for the crime of the Crimea began in July and August 2015, and the coolest month is December 2016.

For three years in the Crimea and Sevastopol was recorded 21 a terrorist act, over 5.2 thousand crimes related to drug trafficking, and 406 murders and attempted murders.

Leading researcher of Institute of problems of law enforcement Kirill Titaev said that the work of Russian law enforcement in Crimea began to improve only towards the end of 2014. To understand the trend of the development of the situation with crime will be another three to four years. In addition, in the resort areas recorded crime is always less than real because vacationers rarely go to the police.

Ukrainian police had the same shortcomings as the Russian police, but were poorer and fewer in number, says Titaev. Bureaucratic pressure was lower, but the statistics of registered crimes was also quite conventionally associated with the real situation. “After the actual occurrence of the Crimea in structure of Russia in this region more intensively working organs of the FSB and the centers of “e” of the Ministry of interior, for whom the disclosure of terrorist crimes is an indicator of their effectiveness,” says Titaev.

Three years later, the inhabitants of the Crimea appreciate joining Russia unequivocally positive, summarizes the research project Manager VTsIOM Mikhail Mamonov. “The referendum was conducted under highly emotional slogan “Return home”. When I return home, ready to ignore the negative aspects,” explains Mamonov. The main reasons for dissatisfaction continue to be rising prices, roads, bureaucracy, the health care system. However, residents note the progress in comparison with Ukrainian period and compare the situation in Crimea with what is happening in Ukraine, including the Donbass. Crimean Tatars in General are more critical, but fundamental differences in the mindsets with other national groups (Russians and Ukrainians) no, says the expert.

Polls show that life in Crimea is hard, but patience and optimistic expectations of the population is high, says a leading analyst Thomas Gregory Kertman. The positive dynamics of the residents see in the growth of pensions, building roads, teaching in Russian language. There is dissatisfaction with the municipal authority, which is not enough updated. “In Sevastopol, in the middle of last year there was a strong frustration and dissatisfaction, which is left after the resignation of Governor Sergey menyaylo,” notes Cartman.

About how to live in the Crimea, local businesses, three years after joining the Peninsula to Russia, read the material on March 17