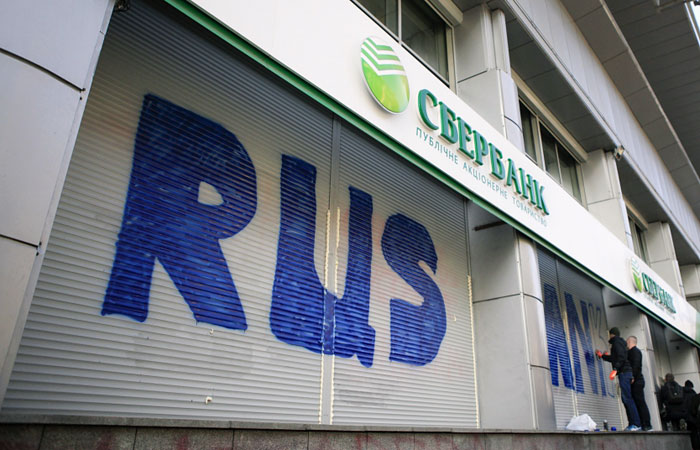 Moscow. March 16. The President of Ukraine Petro Poroshenko enacted the decision of the Council of national security and defense sanctions to the five banks with Russian capital, said on Thursday the press-service of the head of state.

“Sanctions for a period of one year will be applied to public joint-stock company (OAO) “Sberbank”, PJSC “Vs Bank”, PJSC “joint-stock commercial industrial-investment Bank”, PJSC “VTB Bank”, PJSC “BM Bank” in the prohibition to withdraw capital listed legal entities outside Ukraine in favor of individuals associated with them”, – stated in the message. According to information of the national security Council took this decision on 15 March, taking into account proposals of the national Bank of Ukraine.

The President instructed the government and the national Bank to ensure the implementation and monitoring of the effectiveness of sanctions, as well as urgent to take measures to prohibition of placement of funds of state enterprises, institutions, organizations and economic structures, in the authorized capitals of which there are corporate law of the state banks mentioned in the decision of the Council.

“Ukraine’s foreign Ministry should inform the competent authorities of the European Union, USA and other countries to impose sanctions and raise before them the question of applying the same restrictive measures in respect of the relevant legal entities”, – stated in the message. Control over the implementation of this decision rests with the Secretary of the NSDC Oleksandr Turchynov. The decree comes into force from the date of its publication.

The Russian Central Bank earlier Thursday said that the financial sustainability of Russian banks will not suffer even under the most negative scenario of development of events in Ukraine.

March 16 2017ВТБ will continue to work on Ukrainestat read more

“The Bank of Russia conducts with banks having assets in Ukraine, the work on modeling negative scenario, including the scenario of a full impairment of this investment. According to estimates made taking into account the small volume of these investments in the balance of the Russian banking groups and is already established under impairment reserves of even the most negative scenario will not have a material impact on their financial stability,” – said the press service of the Central Bank.

On the eve of the national Bank of Ukraine has proposed to introduce in respect of the Ukrainian subsidiaries of Russian banks in the form of prevent capital flight outside Ukraine, including in the parent organizations. “It also prohibits payments of dividends, interest, return of interbank loans, funds from correspondent accounts and subordinated debt. Also proposed to prohibit the distribution of profits and distribution of capital,” – said the first Deputy head of the NBU Jacob Smoliy.

Smoliy said that we are talking about five banks – Prominvestbank, VTB Bank, BM Bank, savings Bank, Vs Bank. As said the Deputy head of the NBU Ekaterina Rozhkova, the proposed sanctions will not apply to other banks that have Russian capital, in particular, Alfa Bank. “We are talking about banks that are owned by the Russian state. “Alpha” does not apply to this group” – said the forbidden NBU.

One of the main reasons for the discussion of sanctions was the decree of the President of Russia Vladimir Putin “On the recognition in Russia of the documents and registration plates of vehicles issued to citizens of Ukraine and stateless persons permanently residing on the territories of separate districts of Donetsk and Lugansk regions of Ukraine”. According to the decree, the Russian banks have to take the passports of DNR and LC.