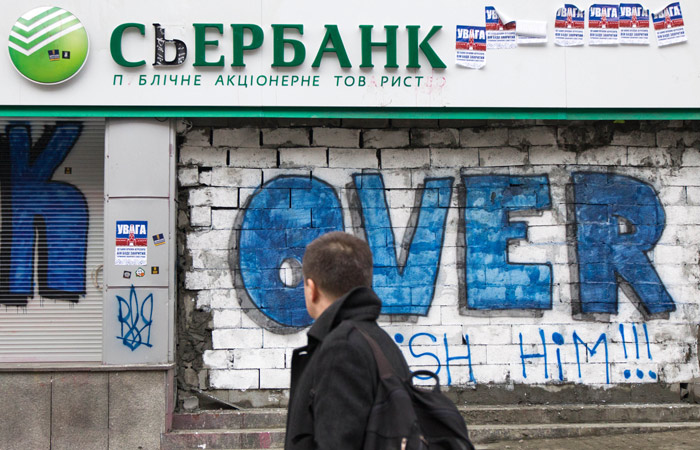 Moscow. March 15. The national Bank of Ukraine pursuant to the decision of the Council of national security and defense Council (NSDC) offers him to enter against the Ukrainian “daughters” of the banks with state capital of the Russian Federation sanctions in the form of prevent capital flight outside Ukraine.

“The use of such sanctions would prohibit any financial transactions in favor of the parent banks: interbank loans, deposits, subordinated debt, purchase of securities, placement of funds on correspondent accounts and other similar transactions”, – said the first Deputy head of the NBU Jacob Smoliy at a briefing on Wednesday.

“It also prohibits payments of dividends, interest, return of interbank loans, funds from correspondent accounts and subordinated debt. Also proposed to prohibit the distribution of profits and distribution of capital,” he added.

The Deputy head of the NBU Ekaterina Rozhkova said that sanctions are not offered in connection with the decree of the President of Russia Vladimir Putin of the documents of the self-proclaimed DND and LNR and their accounting by Russian banks and with the aim of preserving financial stability and the full implementation of the Ukrainian banks with Russian state capital obligations to clients.

According to Rozhkova, Ukrainian banks with Russian state capital operating within the framework of prudential norms, are capitalized, and no complaints about them from the point of view of the supervision requirements. “They are working normally, serving all its customers. The proposed sanctions will not affect the clients – legal entities and individuals operating in the territory of Ukraine,” – said Rozhkov.

President Vladimir Putin in February 2017 signed a decree “On the recognition in Russia of the documents and registration plates of vehicles issued to citizens of Ukraine and stateless persons permanently residing on the territories of separate districts of Donetsk and Lugansk regions of Ukraine”.