On Saturday, March 18, at MSU held the “Spring festival”, dedicated to the three year anniversary of the annexation of Crimea. According to GU MVD in Moscow, and was attended by 150 thousand people. Previously, the TV channel “Rain” reported that the organization of the meeting of the Moscow government spent 22 million rubles.

Not the event was attended by President Vladimir Putin, while in 2014 and 2015 he’s in the same shares that are then passed on Vasilevsky descent, participated. Communist party leader Gennady Zyuganov also for the first time in 2014 at the rally did not appear due to the fact that decided not to “play with power”. The leaders of the “United Russia” “Fair Russia” LDPR and Zyuganov’s example was not followed.

The festive event was attended by Denis Maydanov, singer Valeria, the group “Factory”, “lube”, “Degrees” and other Russian pop stars. Leaders of three parties – United Russia, just Russia and the liberal democratic party – speeches. The event ended with a mass singing of the Russian national anthem and fireworks.

The organizers of the extras for the rally-concert appointed its members meet at 15:00 near the metro station “University”. “Gathering in the metro, the benchmark will be a white sign with a large letter “M”, to meet will personally,” warned the organizer Andrei wishing to participate in the ad, which appeared in the open group “Vkontakte” “Crowd.ru” on March 15, three days before the festival.

In the announcement it was reported that in three hours the participants will receive 400 rubles “on the right hand after the event”. You will need to “pass the organized convoy to the venue of the festival, a little stand and home,” mentioned in the ad. At the time of writing the announcement on the set of extras has been removed (screenshot ads have).

Future participants in the metro really was met by the organizers with the promised sign large letter “M”. All who expressed a desire to come to the rally and earn, lined up in a separate convoy at the lobby of metro station “University”. 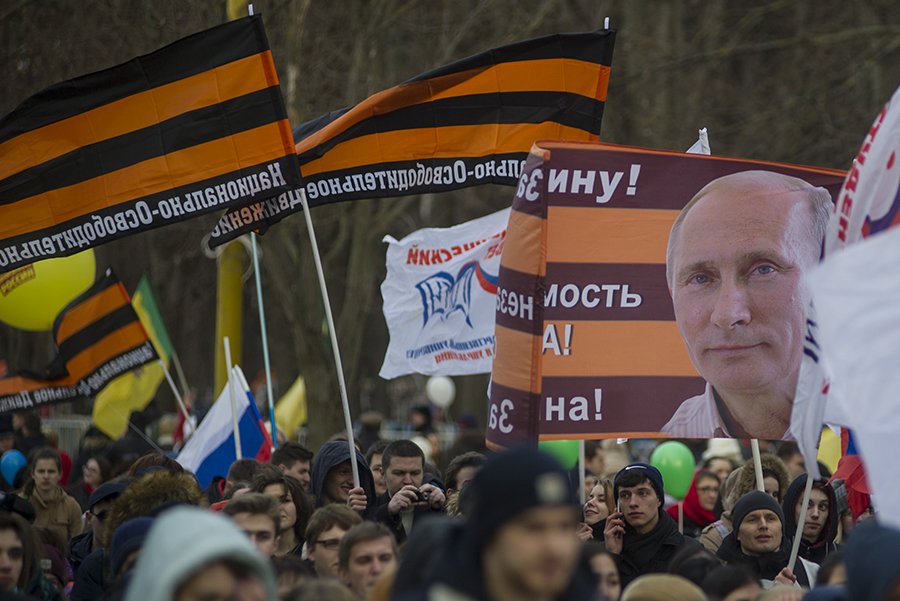 Ibid., at metro were crowded with the representatives of political parties and movements according to estimates of the correspondent , not less than 2 thousand people. Here built his column “National liberation movement” (GCD), the party “Great Motherland” and the youth organization of the liberal democratic party and the Russian Union of rural youth, and students of the University. Nadawcy unfurled a huge banner “For the Motherland! For independence from the United States! For Putin!”.

The organizers of the other columns of unmarked flags and banners, holding signs with numbers. It was rooms of educational institutions: to come to share ordered the high school at least five Moscow schools told the five students. To 15:30 in the metro gathered at least three hundred students.

The rally began at about 15:40: by this time under the sign with the letter “M” near the metro station “University” brought together about 130 people. The organizers have built them in rows six and told him “in no case not to get out ahead of the poster” — signs, which carried one of them.

The participants of a column “M” has reached the first Humanities building of Moscow state University, where they were built in a row together with representatives of the veteran organization “boevoe Bratstvo” state Duma Deputy (United Russia) and the Creator of the Patriotic movement “Antimaydan” Dmitry Sablin. Behind them is a member of Noda, the leader of which is the other of the Duma United Russia Deputy Yevgeny Fyodorov, and NOD — column unmarked.

The protesters from the crowd will receive from the organizers from 200 to 400 rubles, and most of those behind the reward came to the event to MSU, not doing this for the first time, said the participant of the rally-concert. “We at Poklonnaya was [ action of 22 February, on Poklonnaya hill, dedicated to the Day of defender of the Fatherland], but it paid more — 450 rubles”, — said the participant of the event.

In events devoted to accession of the Crimea to Russia, worked 10-12 of the organizers of the crowd, said one of them . “Every 100-150 people signed up”, he said. Only at MSU, according to his calculations, gathered from 1000 to 1800 people, who were promised a reward. On the question of who is sponsoring the crowd and the campaign organizers from other firms, the interviewee did not answer.

The concert and payment

The column moved to the main building of MGU at 16:30. At the end of the action was planned a concert with participation of pop stars. “Have a little bit left, pass, few stand up and go home,” tried to support his column “M” organizer Andrew.

At the concert, which began at 17.00, the participants of a column “M” were invited to “hang out a little” and go as soon as everyone is “finally freeze and get bored.”

In the area of 18.00 organizers extras brought the members of the convoy for the metal frame, and passing on the strength of ten meters to the side of University Avenue, began to pay participants. All checked on the list of 210 names. After that, each received 400 roubles from the thick stack and the invitation to “come again”. “We still get together, probably on may 9, don’t miss,” he admonished the participants by the organizers.