The decline in interest

Levada-center conducted a survey (a) the interest of citizens to historical epochs and the most significant, according to respondents, periods in the history of Russia. Still the most “priority interest” for the respondents is of the Great Patriotic war. But if in July 2008, this period attention showed more than half of respondents (55%), in March 2017 — a total of 38% (the polls on this subject between 2008 and 2017 the “Levada” was not).

Over the same period dropped significantly from the Russians of the Petrine period (from 42 to 31%), history of Ancient Russia (from 34 to 28%), Silver age (from 23 to 18%). Despite the decline in interest, these historical periods are still the most relevant for respondents after the history of the great Patriotic war.

At the same time, a growing citizens ‘ attention to the history of the Brezhnev era (11 to 17%). The oscillation of interest of the respondents to other historical periods is within the statistical error. 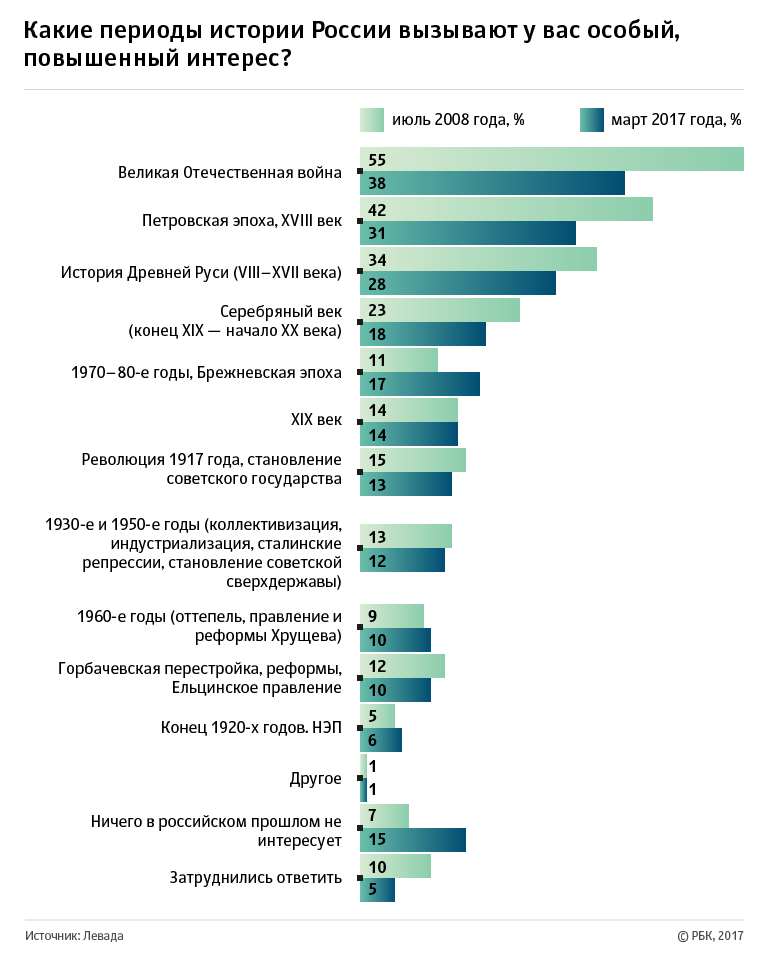 Two times more people now generally “nothing in the Russian past, not interested” (7 to 15%).

The Soviet cult of the great Patriotic war with a massive celebration of memorable dates was restored in the presidency of Vladimir Putin against the background of “ideological vacuum”, noted the political scientist Nikolay Mironov.

“This authorities is progressing due to the lack of other significant victories, with the departure of veterans there was “Immortal regiment”. However, the great Patriotic interest for less than half of Russians, in fact, because of limitations of the events of the war enters into the region of myth and displaced from the mass consciousness”, — says the expert.

The growth of interest in the Brezhnev era on the background of General decline in attention to the history associated with the policy of the government channels in recent years, suggested the Deputy Director of the Levada center Alexei Grazhdankin.

“Now there is a restoration of interest in what was forgotten in the 1990-ies and then was subjected to sharp critical assessment. This contributes to a policy of gostelekanalu who are actively returning to the cultural heritage of the Brezhnev era. Against the background of falling interest in long history of growing attention to the near history,” — says the sociologist.

Kievan Rus and the Crimea

Another question for sociologists: what is the date, age, event starts, in your opinion, the history of our country? The most popular answers, respectively: since ancient times, Kievan Rus, with the baptism of Rus.

That story begins with the dawn of time, in March 2017 I think 36% of Russians. In July 2003 replied as 39% (survey on this topic between 2003 and 2017 the “Levada” was not). Despite a General decline in interest of the respondents to the history of Ancient Russia, more and more people believe that the history of the country begins with her (an increase from 19% to 26%). Slightly changed the number of supporters beginning from the baptism of Rus (11 to 12%). 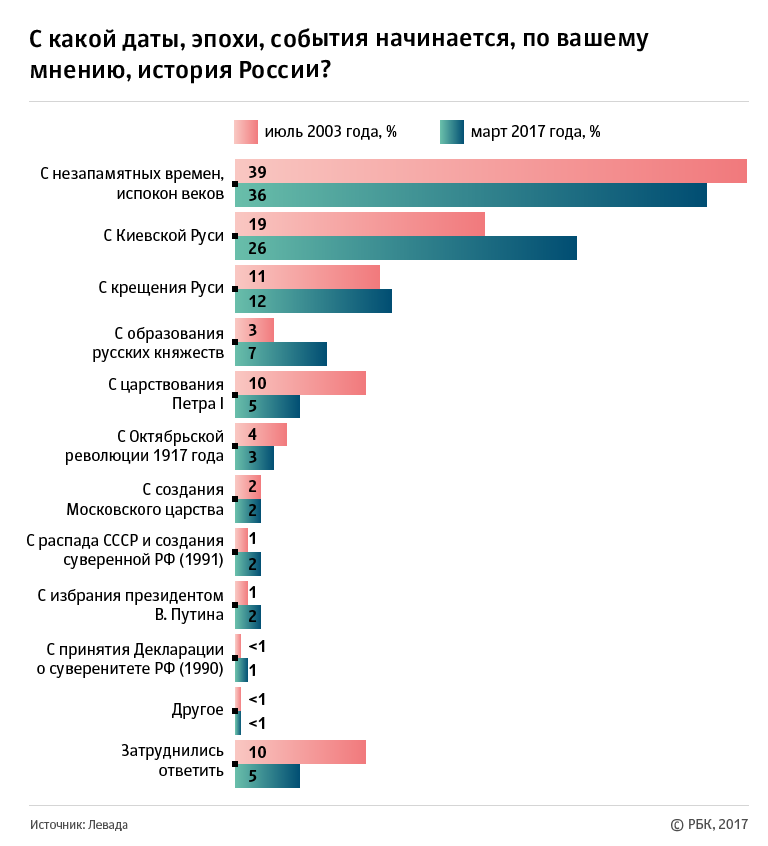 Grazhdankin connects the growth of the supporters point of reference to the history of Kievan Rus with the political context of recent years: the power struggle over rights to historical heritage of the Crimea and promoting in Russia the figures of Prince Vladimir the Baptist.

These sociologists suggest “a kind of fatigue of Russians from “aggressive” Patriotic discourse in recent years, an important part of which is to appeal to our “glorious history”, the analyst suggested Abbas Gallyamov.

“Patriotism has become so formal and insincere, that he began to cause rejection. Besides it is imposed on not the most favourable background: the social health of people and lower living standards. It can not be annoying on the principle of bringing you to the us with his last climb, you’re on our present view, — the expert believes.

“The great Patriotic war for the Russians remains an important historical event in the life of the country, but in recent years General interest in history has fallen,” said Grazhdankin. In his opinion, the General decline of interest in history can be compared with the post-perestroika era 1990-ies. Then, because of the “avalanche of information that people have suffered in the restructuring”, citizens become less responsive to historical themes.

The sociologist also pointed out that interest in history depends on the age. Young people, in principle, fewer old interested in history. In addition, young respondents (representatives of the “Putin generation”) show more attention to the history of Kievan Rus, while the Brezhnev era interested in people of retirement and pre-retirement age. History of the great Patriotic interests as older people and young people. Somewhat less it has attracted the attention of people about 40 years old, socialservices in 1990-e years, says Grazhdankin. “It reflects the agenda of those years,” — said the sociologist.

A survey by the Levada centre was conducted 2-6 March 2017 on a representative nationwide sample of urban and rural population of 1.6 million people. The respondents were people aged 18 years and older in 137 localities of the 48 regions of the country. Of the respondents personally interviewed at home.